Afterward was first published in The Century Magazine for January 1910, and was then reprinted in the collection Tales of Men and Ghosts published later the same year. It was one of a number of ghost stories written by Edith Wharton. The genre was very popular at the end of the nineteenth century and the beginning of the twentieth. 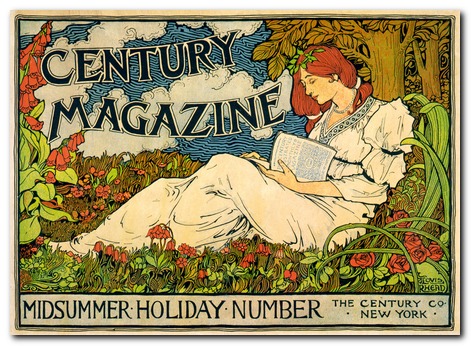 It is very difficult to analyse or pass critical comment on a ghost story – unless one takes the supernatural premise seriously – for which in this case there seems to be little incentive provided. Edward and Mary Boyne have profited handsomely from the Blue Star Mine venture, and they have a naively romantic notion to retire to a fashionably old English country estate, where the house is so traditional they hope it will be haunted. The opening of the story is pitched at a mildly satirical level, poking gentle fun at their enthusiasm for a home with no heating or electric lighting.

But they have made their money by enduring ‘for fourteen years the soul-deadening ugliness of the Middle West’. The windfall fortune has now made that sacrifice worthwhile. Edward Boyne has profited from America’s system of individual enterprise and free market capitalism, and he can now afford to turn his back on it.

But he has profited at the expense of his colleague Robert Elwell, who introduced Boyne to the Blue Star venture in the first place. Elwell has borrowed money to put into the scheme, but then lost it when Boyne ‘got ahead’ of him in business. Elwell has tried to commit suicide, then has died shortly afterwards, leaving his wife destitute.

Edward Boyne moves to the old house in Dorset and almost immediately begins to behave strangely. When Elwell makes his two ‘visits’ to the house, Boyne recognises his figure on both occasions. The first occurs on the day he attempts suicide, and the second is on the day he dies (in America). Elwell therefore acts as the embodiment of Boyne’s guilty conscience over his dubious business dealings regarding the Blue Star Mine.

This does not explain how or why he disappears, but at least it provides a psychological underpinning to the story, which as a matter of fact might well have a second ‘disappearance’ – that of Mary Boyne herself.

The story begins with Mary in the library at the house in Lyng, recalling to herself the events that have led up to the disappearance of her husband. This gives the impression that hers is the controlling perspective and point of view in the narrative – and that (logically) she is still alive in order to recount the entire story, which is unfolding retrospectively. But the tale also ends with her in the library, receiving the gruesome news from Parvis about the attempted suicide and subsequent death of Elwell. She realises that she has directed the supernatural Elwell to her husband in the same room, and the shock appears to kill her.

She felt the walls of the room rush towards her, like inward falling ruins, and she heard Parvis, a long way off, as if through the ruins, crying to her, and struggling to get at her. But she was numb to his touch, she did not know what he was saying. Through the tumult she heard but one clear note, the voice of Alida Stair, speaking on the lawn at Pangbourne.

If this is the case, it is a neat technical achievement on Edith Wharton’s part – because she has created a narrative which ends with the death of the person from whose point of view the story is being told.

Part I.   Americans Edward and Mary Boyne make a lot of money in the Blue Star Mine venture and decide to live in England. They choose an old country house in Dorset which they hope will have its own authentic residential ghost. Their English cousin Alida Stair reassures them that there is a ghost, but they won’t know about it. Ned Boyne hopes to write a book on economics and culture, but he seems out of sorts to his wife. She thinks it might be the influence of the haunted house, but since no ghost has ever been seen, this notion cannot be verified.

She locates a concealed panel which provides access to the roof, from where she and Ned see a figure approaching the house. Ned goes down to meet him, but when Mary follows them the man is no longer there. Ned gives her an explanation, but appears to be disturbed.

Part II.   Two months later she thinks she sees the same figure again – but it turns out to be her husband, whose moods appear to change in a disconcerting manner. A letter then arrives announcing legal threats brought against Ned and his dealings with the Blue Star Mine by his former partner Robert Elwell. But Edward reassures Mary that the matters in the letter have now been settled.

Part III.   Next day Mary feels completely reassured and she enjoys a proprietary stroll in the grounds, where she meets a young man who has come to see Ned. Since Ned is busy, he says he will come back again later. But when Mary goes in to lunch Ned is missing. The servants report that he has gone out with the young man. Mary interrogates the staff, but they know nothing about the stranger, except that he was wearing a strange hat.

Part IV.   Two weeks later Ned has still not reappeared and has left behind a fragment of a letter to a Mr Parvis relating to the legal dispute over the Mine. Mary makes extensive enquiries, but there is no trace of Ned. She gradually adjusts to the fact that he may not be coming back.

Part V.   Mr Parvis arrives from the USA to explain that Ned’s partner Robert Elwell lost money in the Mine venture and has died following an attempt to commit suicide. His widow has fallen on hard times. Parvis shows Mary a newspaper clipping which reveals a photograph of the young man who twice called at the house. Mary calculates that the first visit took place at the same time as his attempted suicide and the second later visit was at the time he actually died. The last words she recalls are those of her cousin warning her that “You won’t know [about the ghost] till long, long afterward.”