Bunner Sisters was written in 1891, but wasn’t published until 1916 in Edith Wharton’s collection of short fiction Xingu and Other Stories. Technically, it has very strong claims to be classified as a novella, rather than a short story, but it is usually listed with her shorter works to keep it separate from the novels. 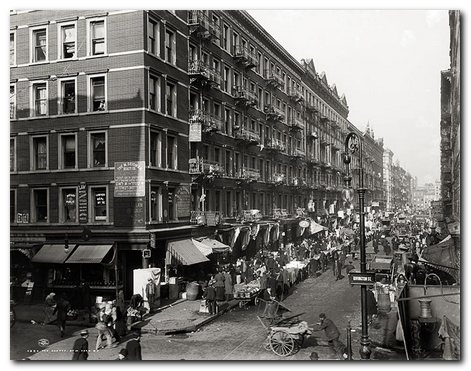 There was a literary vogue towards the end of the nineteenth century for naturalism – which is characterised by a concentration on everyday, unheroic subjects, often seeking to expose the poverty and misery of existence in contrast to the romantic and heroic treatment of life in traditional fiction. Naturalism as a literary mode was underpinned by a belief in determinism – that social conditions and heredity were the primary forces shaping human character. It was also strongly influenced by two other important philosophic features of late nineteenth century society – the decline of religious belief and the powerful influence of Darwinism and its popular manifestation in the idea of ‘the survival of the fittest’.

Both of these ideas led the adherents of naturalism to emphasise a pessimistic view of life, and they also took the opportunity to expose the harsher and degenerate sides of society, including poverty, crime, prostitution, and corruption in general. There was also a marked tendency amongst naturalistic works to focus on the life of big cities. Writers who epitomised this literary trend included Emile Zola (France), Theodore Dreiser (USA), Stephen Crane (USA) and George Gissing (UK) – all of whom were at the height of their fame when Edith Wharton started writing.

Bunner Sisters certainly includes many of these ideas. Although it seems to begin in a mildly satirical manner, its trajectory is grimly pessimistic as things go from bad to worse in the two sisters’ lives. Their business slowly dries up; they are preyed upon by a man who turns out to be an opium addict; and he eventually ruins Evelina’s life, which in turn leaves Ann Eliza destitute.

These naturalistic tendencies are worth noting, because they were still present in Edith Wharton’s work when she came to write her first major novel, The House of Mirth in 1905. Lily Bart falls from a much greater social height than Ann Eliza and Evelina Bunner, but she ends in a similar fashion – destitute, ill, and exhausted with self-sacrifice.

Part I.   Ageing sisters Ann Eliza and Evelina Bunner maintain a millinery shop in a seedy and run down area of New York. They live in straightened circumstances, and on the occasion of Evelina’s birthday, her sister buys her a cheap clock.

Part II.   She has bought the clock from an equally run down shop in the neighbourhood run by bachelor Herman Ramay, who she decides to pursue when the clock stops working. She goes to the local market, hoping to meet him there, but doesn’t. A lifetime of co-operative self-sacrifice and renunciation begins to crumble as the two women secretly become competetive regarding Mr Ramay.

Part III.   Mr Ramay calls to check the clock they have bought, but nothing transpires from the visit.

Part IV.   They then entertain Miss Mellins, a dressmaker from upstairs, whereupon Mr Ramay visits again. Ann Eliza is jealously concerned that he is visiting to see her younger sister.

Part V.   Mr Ramay visits more frequently, but divides his time there between long silences and lengthy autobiographical anecdotes. He takes Evelina to a stereopticon; spring arrives; and he invites them both to Central Park, along with Miss Mellins. Ann Eliza is forbearing on her sister’s behalf.

Part VI.   The sisters wish to transfer their meagre earnings into another bank. Ann Eliza calls for advice on Mr Ramay, who seems to have been ill.

Part VII.   Mr Ramay takes them on an excursion to his friend Mrs Hochmuller in Hoboken. Over dinner they discuss Mr Ramay’s illness – which he denies. Then Evelina and Mr Ramay go for a walk in the countryside. Shortly afterwards Mr Ramay calls to the shop and proposes marriage to Ann Eliza, but she tells him she cannot think of marrying. She is secretly ecstatic at this major event in her life, and disappointed that she cannot reveal it to her sister.

Part VIII.   Mr Ramay then goes on an excursion with Evelina, who returns to announce that she is engaged to Mr Ramay. Ann Eliza prepares herself for being left alone when her sister moves to live at Mr Ramay’s shop. However, Mr Ramay gets the offer of a job in St Louis, though he does not have enough money to risk transferring there. Ann Eliza gives her sister her half of their joint savings.

Part IX.   Left on her own, Ann Eliza feels very lonely, and Evelina writes from St Louis to say that she is lonely because Mr Ramay is out at work all day. Then the letters cease, and Ann Eliza learns that Mr Ramay has been dismissed by his employers. She cannot afford to visit St Louis and look for her sister, and meanwhile the business goes downhill.

Part X.   Anna goes to seek help from Mrs Hochmuller in Hoboken, but when she gets there she discovers that Mrs Hochmuller left some time before. She contracts fever as a result of the journey and is in bed for over a week. When she recovers she visits Mr Ramay’s old employers, only to be told that he was dismissed for taking drugs.

Part XI.   Months pass by, then one day Evelina suddenly appear at the shop. She is in a very bad way, and recounts her tale of Mr Ramay’s opium addiction, the birth and death of her child, and Ramay’s running away with young Linda Hochmuller. Evelina was reduced to begging in the streets.

Part XII.   Evelina continues to be very ill, and Anna has to borrow money from Miss Mellins to pay the doctor’s bill. Anna loses her faith in Providence and feels that self-sacrifice does not automatically transfer good or benefit to its intended recipient. The doctor recommends hospital for Evelina, but Anna prefers to keep her at home. Evelina reveals that during her troubles she has converted to Catholicism.

Part XIII.   Evelina gets steadily worse (with consumption) and believes her Catholic faith will permit her to be reunited with her baby in heaven. When Evelina dies, Anna gives up the shop, sells the last of her effects, and faces a bleak and unknown future.