Confession first appeared in Edith Wharton’s collection of stories The World Over, which was published in 1936. It is based upon a famous (and scandalous) incident from 1892 which Edith Wharton had used for the basis of a stage play which she never completed.

The puzzle to this story is explained by the fact that nowhere is the truth of the situation made explicit. Everything is revealed via inference and small details which add up to the fact that Kate has killed her father. The trial jury concluded that Ezra Spain was killed by ‘a passing tramp’ and his daughter Kate has been acquitted of any involvement in the crime on the strength of the evidence of the household servant Cassie Donovan who testified that they were both elsewhere at the time of the murder. As Jimmy Shreve points out to Severance in his exposition of the facts:

Cassie was the servant girl’s name, sure enough … It was her evidence that got Kate Spain off. But at the trial she was a thin haggard Irish girl in dirty calico

But she has become larger and coarsened through over-indulgence, and like Kate she has changed her name – from Donovan to Willpert. Cassie has complete control over Kate, who does whatever her socially subservient travelling companion decides.

Kate also provides Cassie with an allowance, and in earlier attempts to free herself from the dominance of her companion she has offered to give her a house and double her allowance – offers which were refused.

Because Miss Willpert is such an unappetizing figure (especially in the eyes of the first person narrator Severance) superficial suspicion is cast over her as the villain whom Kate Ingram has agreed to protect.

But in fact the truth is the other way round. Cassie Donovan has provided an alibi for Kate Spain, who is guilty of the murder. In return for this favour Kate is forever beholden to her former domestic servant. This explains her inability to act in her own interest. Kate is not free to do anything – because Cassie has the evidence which could reveal her guilt.

That evidence is information she carries within herself, and it is encapsulated in the written document Cassie is about to produce from her handbag when she has her stroke. Following her death, that evidence is rescued from the police by Severance’s vigilance and is passed over to Kate.

Severance guesses that the envelope contains information about the trial, but he assumes that Kate has concealed evidence to shield someone else (that person most likely being Cassie Willpert). He does not suspect Kate herself, and thus he remains ‘innocent and slightly naive’ until the end..

This story has strong echoes of the Lizze Borden trial – a case which shocked America (and the world) in 1892. Lizzie was tried for killing her wealthy but tyrannical and tight-fisted father and her stepmother with an axe, but acquitted because of conflicts and lacunae in the evidence.

The trial caused a sensation which was intensified by extensive coverage in newspapers. And even though she was acquitted, Lizzie was ostracised by the public ever afterwards. Edith Wharton not only knew about the famous Lizzie Borden case, she started writing a play about it, called Kate Price but never finished it.

The case is remembered in American folk memory by the anonymous rhyme:

Lizzie Borden took an axe
And gave her mother forty whacks.
When she saw what she had done
She gave her father forty-one.

Setting
The story begins in a hotel situated in Mont Soleil in the Engadine, southwest Switzerland. When the two women leave for Italy, Severance follows them to Orta in the Italian lakes.

Severance, a somewhat naive and imperceptive New York banker is convalescing in a Swiss hotel when he encounters a mysterious woman with whom he very rapidly falls in love. She is Mrs Kate Ingram, and is closely protected by a brusque and masculine travelling companion Cassie Willpert, who takes a dislike to Severance. Jimmy Shreve, a journalist friend of Severance arrives at the hotel and claims that Mrs Ingram is in fact Kate Spain, a woman who has been acquitted in a trial for the murder of her rich and tyrannical father. Severance does not believe this story.

He tries hard to express his interest in Mrs Ingram and to learn more about her, but is repeatedly thwarted by Miss Willpert. Mrs Ingram finally hints that she will reveal more about herself the next day. But when Severance presents himself he learns that the two women have left the hotel for Italy.

He follows Mrs Ingram to a shabby pension on Lake Orta in Italy where she confesses to him that she is Kate Spain, and has travelled to escape the opprobrium attached to her name. Severance makes an offer of marriage, but she says that Cassie Willpert will never agree to it. They agree to meet her the next day to seek a resolution.

But next morning Cassie Willpert confronts Severance in his room. She tells him that Kate Spain cannot marry him or anyone else. She then tries to bribe him to leave, and when he refuses she threatens to reveal something that will shock him into submission. She is about to produce the evidence when she has a stroke.

In fact she dies shortly afterwards without revealing anything. Severance presses his offer of marriage again, whereupon Mrs Ingram produces an envelope belonging to Miss Willpert and insists that Severance read it. He accepts the envelope, insists he will not read it, but promises not to destroy it.

Severance assumes that the contents of the envelope have some bearing on the death of Kate’s father, and he assumes that she is protecting someone – the overt implication being that this person is Miss Willpert. But since she is now dead, all objections to the marriage are removed. They do finally marry, but Mrs Ingram dies five years later, whereupon Severance burns the envelope. 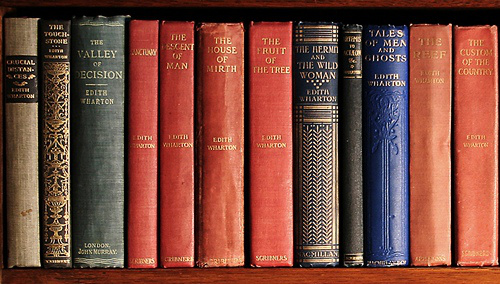