a tutorial in literary analysis

This tutorial features a close reading exercise on the opening two paragraphs of D.H.Lawrence’s story Fanny and Annie, taken from his collection England, My England which was first published in 1922. It tells the story of a young woman Fanny, returning with some trepidation to her home town in the north of England, to meet her young man, Harry.

In the tutorial notes that follow, each sentence is considered separately, with comments highlighting whichever features of the prose seem noteworthy. The focus of attention is largely on Lawrence’s choice of vocabulary and some of the rhetorical devices he employs.

A close reading exercise is not a guessing game or a treasure hunt: it is an attempt to understand the mechanisms by which a narrative is constructed and its meanings generated. However, a really successful close reading can only be made when you know the work as a whole. So, if you wish to read the complete story in conjunction with these tutorial notes, it is available free at Project Gutenberg. 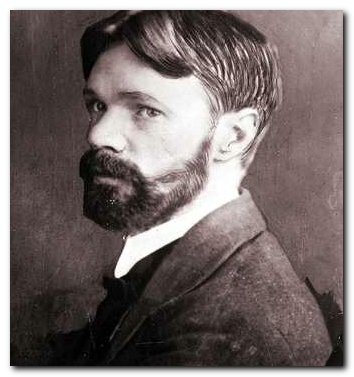 Fanny and Annie – the text

Flame-lurid his face as he turned among the throng of flame-lit and dark faces upon he platform. In the light of the furnace she caught sight of his drifting countenance, like a piece of floating fir. And the nostalgia, the doom of homecoming went through her veins like a drug. His eternal face, flame-lit now! The pulse and darkness of red fire from the furnace towers in the sky, lighting the desultory industrial crowd on the wayside station, lit him and went out.

Of course he did not see her. Flame-lit and unseeing! Always the same with his meeting eyebrows, his common cap, and his red-and-black scarf knotted round his throat. Not even a collar to meet her! The flames had sunk, there was shadow.

01.   In the first sentence Lawrence plunges straight into the use of alliteration and repetition to give dramatic emphasis to his scene. ‘Flame-lurid his face’ is the first of many alliterative uses of f and l in the passage, and the term flame is repeated within the sentence at ‘flame-lit’. Moreover the single word ‘flame’ itself contains the two alliterated letters. This is very much in keeping with the theme of the story, which is about sexual passion and the physical attraction between Fanny and Harry, despite her reservations about his status as a working-class male. Fire, heat, and flame are all traditionally associated with passion.

Moreover, ‘lurid’ is a rather emotionally charged term – an item of vocabulary taken very much from the literary register. Note too that the sentence lacks a main verb: there is an implied (but missing) verb was in ‘Flame-lurid his face’.

And the term ‘upon’, where today we would just write ‘on’, gives the sentence quite a serious tone: it has an almost Biblical ring to it. Lawrence was very influenced by his non-conformist religious background, and uses lots of its imagery in his work.

02.   ‘Furnace’ and ‘floating fire’ continue the use of alliteration. They lend an incantatory rhythm to the narrative voice, which is actually giving Fanny’s point of view.

A simile is used to compare his face (poetically described as ‘his drifting countenance’) with the piece of fire. And ‘drifting’ here seems to carry two meanings: both literally as in ‘moving along the platform’, and metaphorically as ‘independent and untroubled’. We subsequently learn that this is how Fanny perceives Harry. ‘Countenance’ is another literary and quasi-Biblical term. And ‘a piece of floating fire’ is a fairly striking image – but perfectly in keeping with the charged manner of Fanny’s perceptions.

03.   Following ‘nostalgia’ the term ‘doom of homecoming’ is almost a tautology, but Lawrence is obviously piling on emphasis here – as the onomatopoetic ‘doom’ illustrates. ‘Doom’ gives a sense of heavy inevitability, as though her life is predictably blighted by her origins.

Note too that he is using the phenomenon of nostalgia in its negative sense (it can mean both ‘homesickness’ or ‘sentimental regret’.) The simile ‘like a drug’ is another strongly emotive comparison.

04.   The adjective ‘eternal’ is used to powerful effect here as it again suggests inevitability. The word ties in with the biblical vocabulary noted earlier. ‘Eternal’ usually describes God and therefore it is positive, but in the context of the passage it works in a negative way to suggest that Fanny feels trapped.

I take it to represent Fanny’s annoyance: she does after all resent the fact that she is having to come back to Harry. And I support this reading by pointing to Lawrence’s use of the exclamation mark to indicate that the sentence is a segment of narrative written from Fanny’s point of view.

05.   ‘The pulse and darkness of red fire’ gives a very strong impressionistic image in the sense that although very literally red fire cannot possess darkness, we know that Lawrence means alternating periods of lightness and dark. And the terms ‘pulse’, ‘darkness’, ‘red’, and ‘fire’ are all charged with very elemental connotations relating to life in a very primitive sense. This is appropriate as it is an important point in Fanny’s emotional development.

06.   ‘Of course’ is rather conversational in tone, and it is an expression which reinforces the fact that we are seeing the events from Fanny’s point of view.

07.   ‘Flame-lit’ is the fifth occasion of the f/l alliteration in these two paragraphs: this is Lawrence being unashamedly rhetorical in his prose style. Rhetoric is ‘the art of speakers or writers to persuade, inform, or motivate their audience’. Here Lawrence is using these rhetorical devices to show Fanny’s emotional turmoil. .

‘Unseeing’ is another term which is not immediately clear: I take it to mean ‘not paying attention’. In Fanny’s implied voice, this is a statement of bitter irony where ‘flame-lit’ is ‘literally juxtaposed with ‘unseeing’, suggesting that he is blinded by his own light. The sentence as a whole is another which is very impressionistic — incomplete in the strictly grammatical sense.

08.   This sentence too omits an implied ‘He was’ at its beginning: (the technical term for this device is elision). ‘Meeting’ is being transferred from its use as a verb to be an adjective. The effect of this is to animate his features by implying that the eyebrows are conscious, and ‘meeting’ each other.

09.   This is another grammatically incomplete sentence in which, apart from the last word ‘her’, we are almost in Fanny’s mind. Lawrence is using a form of stream of consciousness here to reflect the technical incompleteness and sometimes fragmentary nature of our thoughts. His third exclamation mark reinforces this impression.

10.   The very absence of rhetorical devices in this sentence seems to indicate that Lawrence is preparing the reader for a transition to a less highly charged and impressionistic narrative manner. This proves to be the case in the next part of the story.

The Fox, The Captain’s Doll, The Ladybird – Amazon UK

In your own close reading of this text you might have noticed features different than those listed here. These points are just examples of what can be said and claimed about a text, and help us to understand the technical details of how prose fictions work.

In literary studies there are various types of close reading. It is possible and rewarding to scrutinise a text closely, keeping any number of its features in mind. These can reveal various layers of significance in the work which might not be apparent on a superficial reading. You might focus attention on the text’s –

The most advanced forms of close reading combine all these features in an effort to reveal the full and even hidden meanings in a work.

Studying Fiction is an introduction to the basic concepts and the language you will need for studying prose fiction. It explains the elements of literary analysis one at a time, then shows you how to apply them. The guidance starts off with simple issues of language, then progresses to more complex literary criticism.The volume contains stories by Arthur Conan Doyle, Katherine Mansfield, Thomas Hardy, Joseph Conrad, D.H. Lawrence, and Charles Dickens. All of them are excellent tales in their own right. The guidance on this site was written by the same author.
Buy the book from Amazon UK
Buy the book from Amazon US

Other work by D.H.Lawrence

Sons and Lovers This is Lawrence’s first great novel. It’s a quasi-autobiographical account of a young man’s coming of age in the early years of the twentieth century. Set in working class Nottinghamshire, it focuses on class conflicts and gender issues as young Paul Morrell is torn between a passionate relationship with his mother and his attraction to other women. He also has a quasi-Oedipal conflict with his coal miner father. If you are new to Lawrence and his work, this is a good place to start. This novel has become a classic of early twentieth-century literature.

The Rainbow This is Lawrence’s version of a family saga, spanning three generations of the Brangwen family in the north of England. It is the women characters in this novel who remain memorable as they strive to express their feelings and break free of traditions. The story concludes with the struggle of two sisters, Ursula and Gudrun, to liberate themselves from the stifling pressures of Edwardian English society. The two young women also feature in his next and some say greatest novel, Women in Love – so it would be a good idea to read this first.

D.H.Lawrence at Project Gutenberg
A major collection of free eTexts of the novels, stories, travel writing, and poetry – available in a variety of formats.

D.H.Lawrence at the Internet Movie Database
Adaptations of Lawrence’s work for the cinema and television – in various languages. Full details of directors, actors, production, box office, trivia, and even quizzes.

More on D.H. Lawrence
More on the novella
More on literary studies
More on short stories