information layout and management for professionals

Karen Schriver’s Dynamics in Document Design is another strong entry in the Wiley series of books about writing in the marketplace. Schriver does not intend yet another ‘how to’ book for beginning document designers. Such books are plentiful. She assumes her audience is acquainted with the fundamentals of document design and wants more information about the complexities and subtleties of document design. In this area – and many others – Schriver succeeds admirably. 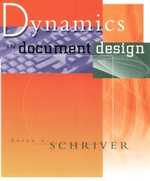 Schriver’s book is so rich in insight, information, and innovation that no review will do it justice. One of the book’s many virtues is its presentation of heuristics for making decisions about typography and page-layout grids. A heuristic, as Schriver explains, “is a way of thinking systematically about the key features of a problem.” Schriver’s heuristic for grids includes taking an inventory of all the text elements (photographs, descriptions, captions, etc.) in the document, organizing these text elements into rhetorical clusters, measuring the actual print or display area, dividing the print or display area into columns and rows, considering exceptions and deviations, trying out some optional spatial arrays for the document, and applying the grid to longer sections of the document to see how it works. For someone who has to design a longer document or complicated web site, Schriver’s heuristics are very useful.

Schriver has not neglected design issues on the Internet. Her 18-page discussion of a student’s case study of the effectiveness of a web site is worth the entire price of the book. As a practitioner of feedback-driven audience analysis, Schriver had taught the student, Daphne van der Vlist of Holland, procedures for studying user responses to document design. Van der Vlist studied the reactions of seven users to the Virtual Tourist web site.

As happens often in Schriver’s book, real users have rich and informative critiques of real documents. In her study, van der Vlist found that users had trouble with incomplete and illogically clustered headings, information that violated users’ expectations, underdeveloped information, poorly laid out lists, and pictures that narrowed content inappropriately. To aid her readers in understanding the users’ problems, Schriver used a four-page spread of eight screens from the web site, with user annotations in the margins surrounding the centered screen representations. Schriver’s analysis and graphic presentation of her student’s case is exceptionally informative and effective. People designing web sites should read this section.

Another strong section of her book describes one of her own projects-
evaluating government-created drug education brochures aimed at teenagers. Using feedback-driven audience analysis, Schriver and her collaborators gathered 297 students ranging from 11 to 21 years old and asked them to respond to the text and graphics in the brochures that they provided. The students’ responses were very sophisticated and revealing. Schriver presents the responses to several brochures by using the format mentioned earlier. She reproduces the brochure in the center of a single page or a two-page spread and surrounds it with student responses in the margin. She draws lines to connect student responses to specific passages and graphics.

The student responses are very constructive and sophisticated. One complained that a brochure was cliched and suggested that a more effective approach would be to present stories about how drug users died or destroyed their lives. Another student complained of the long paragraphs and suggested a list, which other young people would be more inclined to read. Another said the impact of a brochure would be improved if the authors “use pictures of a dead guy.” The students were especially fond of realism. Many of them disliked the line drawings and preferred photographs of actual drug users suffering the effects of drug abuse.

Schriver also discussed the constraints that the government writers and graphic designers operated under when they developed the drug education literature. Many were reluctant to talk about what they did. Bureaucracy and politics stifle the effectiveness of documents and of open communication between researcher/designers like Schriver and her subjects. A quotation from one person eloquently revealed the stress that some government writers and designers felt:

That brochure is not attributable to anyone. We receive lots of assignments, that was just one of them. We can’t say who wrote it. There are so many hands in the process. And we can’t say that what was printed was what anyone in this office wrote. We have to go now.

Schriver offers an important innovation to document design teachers – her protocol-aided audience-modeling method (PAM), which allows document designers to better anticipate problems that users have with documents. PAM has two steps: (1) The student reads a sample document and lists the problems she thinks the intended audience will have with the text and graphics. (2) The student reads a transcript of a think-aloud protocol created by one of the intended users of the same document. A think-aloud protocol has a user think aloud about any difficulties she or he encounters while reading a document (form, instruction, etc.). In her research, Schriver has found that students using PAM were 62% more accurate than a control group in predicting readers’ problems. PAM, in short, is much better than such traditional methods as audience heuristics, peer-group critiquing, role-playing, and purpose oriented audience analysis.

Yet another valuable innovation is Schriver’s timeline of document design from 1900 to 1995. She devotes forty-four pages to tracing the evolution of five design contexts: education and practice in writing and rhetoric; professional developments in writing and graphic design; education and practice in graphic design; science, technology, and the environment; and society and consumerism. On twenty-two sets of facing pages, Schriver has columns devoted to each of the aforementioned contexts in a given decade of the twentieth century.

The evolution of education and practice in writing and rhetoric is fascinating by itself. Schriver begins in 1900 with the instructional emphasis on usage, grammar, and mechanics. “Students are expected to adapt their texts for an audience and to find an original thesis, but they are not taught explicit ways to do so.” In 1904, one of the first technical writing courses in the twentieth century was taught at Tufts College. In 1939, “teaching technical writing or composition at the college level is considered ‘professional suicide’.” In the 1950’s, college instructors finally begin to pay some attention to audience analysis and the relations between writers and readers. In 1955 and later, technical communication courses begin to show interest in teaching graphics. In the 1970’s, some technical communications professors finally begin to get tenure for work in their specialties. In 1994, academics and industry experts express concern that literature professors have too much say in tenuring and promoting writing, rhetoric, and technical communication faculty.

Again, this review cannot pretend to do justice to the many virtues and innovations in Karen Schriver’s excellent book. Even though she aims her book more at experienced document designers and information architects, beginners and students can also profit from reading it. If you design documents for paper or electronic publication, buy this book. You will not be disappointed.