the inventiveness of everyday language

In this fairly hefty study of English slang (‘the people’s poetry’ as he calls it) Michael Adams is trying to bridge the gap between an academic study of linguistics and a populist approach to slang that merely lists recent coinages and their explanations or folk etymologies. He’s trying to make clear distinctions between slang, jargon, colloquial, cant, argot, and merely informal expressions – all of which tend to overlap and bleed into each other. 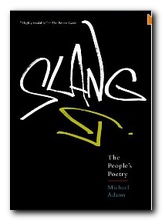 It’s not easy, because a word can belong to more than one category, depending on who is using it and the context in which it is being used. People often use both slang and jargon at the same time – and make little distinction between the two linguistic categories. Moreover the meaning of a slang expression may change over time (like any other item of language) and whilst a great deal of slang has a short lifespan, it does not necessarily disappear entirely.

His most serious argument is that slang is not a ‘low vulgar, unmeaning language’ – as it is defined by the Merriam-Webster Dictionary. Adams claims it is a form of poetry that adds vivacity and pungency to our communication – hence his observation that it is ‘the poetry of everyday life’.

After questions of definition he moves on to consider how it is actually used – in other words, a socio-linguistic approach to the subject. He puts an enormous amount of emphasis on African American slang, almost giving the impression that other groups do not generate slang of their own.

I was interested to note that he skirts round the contentious issue of ‘Ebonics’, but he looks in some detail at the issue of slang and gender. Yes, women do use slang as much as men – particularly if you take into account the use of conversational tags such as innit and thingy.

I’m afraid that this also leads into an extended consideration of Buffy the Vampire Slayer and other television shows, where he talks about Buffy and Homer Simpson as if they were real living Americans. He doesn’t seem to take into account that much of the linguistic inventiveness of these characters is the product of largely white middle-class script writers – though it has to be said for their inventiveness that some of the terms they create do pass into everyday use by ordinary human beings.

There’s a whole chapter devoted to the aesthetics of slang, including a scholarly analysis of rhetorical devices such as tmesis (infixing, as in absofuckinglutely) and diacope (as in shut the fuck up) But the problem is that he unpicks his illustrative examples in exhausting detail and then repeats his explanations and bon mots until they are drained of value.

Michael Adams is obviously very knowledgeable on the subject, but I suspect that his approach might be too scholarly for the average reader and not scholarly enough for specialists. But the book got rave reviews when it first appeared in America, so so there’s no reason it won’t do well in the UK.