Joseph Conrad’s Heart of Darkness book looks at the famous novella in detail from the perspective of the early twenty-first century and offers a series of critical essays which plot its reception and the establishment of its reputation. It begins with a long essay by the editor exploring its political, social, and literary background, offering a defence of Conrad. This is a counter to the criticisms made by Edward Said and Chinua Achebe which claim that Conrad, for all his liberalism, cannot conceal a submerged racism and imperialism from his critical gaze. 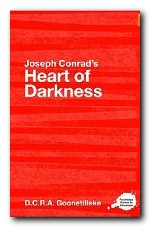 Heart of Darkness was written in 1899, and was based loosely on Conrad’s own experience as a seaman with a commission to sail up the Congo river in 1890. During the twentieth century it has become a central text in the discussion of European imperialism , and possibly the best known of Conrad’s works – even though his first commercial success did not come until much later with the publication of Chance in 1913.

D.C.R.A. Goonetilleke even puts in a spirited defence of Conrad as an even-handed writer in gender terms. I’m afraid he’s on something of a hopeless quest here, as anyone who has read widely in Conrad will know – particularly some of his deservedly less well-known short stories.

There’s a chapter which traces the critical debate on Heart of Darkness from its publication to the present day. This allows readers the opportunity to witness how succeeding generations have interpreted the text, and it’s a refreshing reminder that literary criticism has fads and fashions which change and even disappear.

The latter half of the book is given over to five extended critical readings of the text. These represent what are currently perceived as major schools of literary criticism – neo-Marxist, historicist, feminist, deconstructionist, and narratological. These will allow the serious students of literature at whom the book is aimed to sense the academic climate and see what to aim at in their own work.

The feminist critique takes up the conventional objection that Conrad’s works don’t include many female characters, and even includes a bizarre recipe for those who cannot accept that a writer might not share contemporary values.

Nina Pelikan Straus concluded that while women readers may find some way to appreciate the text (she offers a number of reading strategies), in the end the best that women readers can do is remain detached from Heart of Darkness and refuse to grant the status of high art to the work.

There’s also an interesting bonus – an appendix in which two film adaptations of the text are analysed. Francis Ford Coppola’s Apocalypse Now! (1979) and Nicholas Roeg’s Heart of Darkness (1994) are compared with the original text in a way which casts interesting light on both, though no mention is made of the ‘deleted’ scenes on the old French rubber plantation in Coppola’s film which would reinforce the fact that his work was about imperialism and not just war.

It’s a pity even more divergent views are not represented, but maybe there’s just not enough room in one volume. As Douglas Hewitt, one of the many critics cited in this very scholarly survey observes: “Conrad’s Heart of Darkness has had more critical attention per word than any other modern prose work”.