Katherine Mansfield – Critical Essays is a collection of conference papers given to celebrate the one hundredth anniversary of Katherine Mansfield’s arrival in London from New Zealand in 1908, and the start of her career as a writer. They are arranged in groups dealing with biographical readings, modernism, psychoanalytic interpretations, and autobiography. Biographist Vincent O’Sullivan attempts to explain why Mansfield was so impressed by the mystics Gurdjieff and Ouspensky, and so influenced by Lewis Wallace’s Cosmic Anatomy – but his comments tell us more about the details of her last years than they do about the nature or the quality of her writing. Another essay does something similar by tracing her relationship with John Middleton Murry and the use they made of fragments of biography in the fictions they both produced. 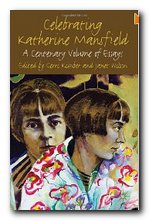 Some essays go into endless detail blurring the boundaries between biography and fiction, ignoring the distinctions which should be made between the two. On the whole, they end up by saying very little of value about either. Considering that most of the authors are senior academics, it’s amazing that so little effort is made to be rigorous about these matters – though I suppose it proves the powerful attraction that biographical ‘evidence’ still exerts on critics, even though they might profess themselves post-modern.

Sarah Sandley is on much firmer grounds looking at Mansfield’s fondness for the cinema, and even tracing the films she was likely to have seen. She then offers fairly clear evidence from the texts to argue that she used filmic techniques in her approach to narrative.

As an aside, it is interesting to note how many of these essays revert to consideration of the same story – ‘Je ne parle pas francais’ – which anybody embarking on this volume would do well to re-read before looking at the separate studies.

There’s a brave contribution that tries to establish links between Mansfield’s writing and her interest in music. She was an accomplished cellist, and it’s true that her compositions often have a conscious structure which can be likened to a musical form. But the convincing evidence is never produced. Mansfield writes about music and has characters who are musicians – but that’s all. It’s only possible to say that one artistic form may be likened to another. Any more than that is rather like Goethe saying ‘Architecture is frozen music’: it’s a striking phrase, but it doesn’t yield analytic insights or go anywhere.

A section of psychoanalytic readings is the signal for an intensification of theoretical jargon and fashionable name-dropping – but most of the contributions remain unconvincing.

Fortunately, the last group of essays dealing with the relationship between autobiography and fiction are on much stronger ground. Mansfield left a substantial account of her life and feelings behind in her journals, letters, and notebooks, never concealing the fact that many of her stories were based on episodes from her own life.

Angela Smith makes an insightful and largely persuasive case for Mansfield’s appreciation of Charles Dickens – a taste she held at a time when Dickens was considered passé in most literary circles.

There’s an article by Anna Jackson on the ‘poetics’ of the notebooks and letters, and the collection ends with an essay by the Mansfield scholar and novelist C.K. Stead recounting the difficulty of establishing properly edited texts of her work.

These later pieces seem to rescue the collection from the blight of literary criticism in its current manifestation as a mechanism for generating career-enhancing fodder for the next round of the Research Assessment Exercise.