La Comédie Humaine is the title Balzac gave to an epic series of novels and stories he wrote depicting French society in the first part of the nineteenth century. It comprises almost 100 finished and fifty unfinished works. The first parts were written without any overall plan, but by 1830  he began to group his first novels into a series called ‘Scènes de la vie privée’.

In 1833, with the publication of Eugenie Grandet, he envisioned a second series called ‘Scènes de la vie de province’. He also devised the strategy of creating characters who were introduced in one novel and then reappeared in another.

This literary technique was a direct reflection of the fact that his novels were serialised in newspapers and magazines. Serial publication was the nineteenth century equivalent of the modern soap opera and the twenty-first century television drama series. Balzac first used this device in his novel of 1834, Le Père Goriot.

He then devised an even more elaborate structure for subsequent works which included private, provincial, and Parisian life, plus political, military, and country life. As the stories, novellas, and novels were moved from one part of this conceptual framework to another, he changed their titles and put them into new groups.

As an enterprising businessman, he also re-published the works in book format and made more money out of the same product. However, he was always hopelessly insolvent – largely because of his lavish life style and because he was paying off the debts on various failed business enterprises.

The logic of this structural framework for his fiction is not always convincing. Lost Illusions for instance is categorised as part of ‘Scenes from Provincial Life’ – and it’s true that the events of the narrative begin and end in Angouleme in south-west France. Yet the majority of the novel takes place in Paris, in a very urban, indeed a metropolitan city.

Balzac actually believed that his grand design and enterprise was something of a quasi-scientific study or research project:

Society resembles nature. For does not society modify Man, according to the conditions in which he lives and acts, into men as manifold as the species in Zoology?

This is essentially a materialist philosophy of the world – one which sees the larger forces in society shaping how people behave and what they believe – rather than the other way round. It is very close to what Marx and Engels only a few years later formulated as classic Marxism. This possibly explains why Balzac was one of the writers they most admired, because he revealed the links between capital accumulation and the ideology of the ruling class.

Balzac also regarded himself as a historian of manners, basing the wide scope of his scheme on the example of Walter Scott, whose work was popular throughout Europe at that time.

French society would be the real author. I should only be the secretary.

He believed that his work should vigorously exalt the Catholic Church and the Monarchy. But he also thought that it was his duty to show the real social forces at work as people fought for their existence in what we would now call a Darwinian struggle for survival. Fortunately for us, his artistic beliefs outweigh his religious and political opinions – though it has to be said that there are many passages of overt proselytising in his work.

Given the interlocking nature of these works and taking into account the huge scale of his endeavour, it is not surprising that the scheme was never completed. Balzac was dead by the age of fifty-two – worn out with overwork.

Notwithstanding the incomplete nature of this grand project, one glance at the lists below reveals the prodigious nature of Balzac’s sheer productivity. There are years in which he wrote not one but two and even three novels that are now considered masterpieces of European literature. 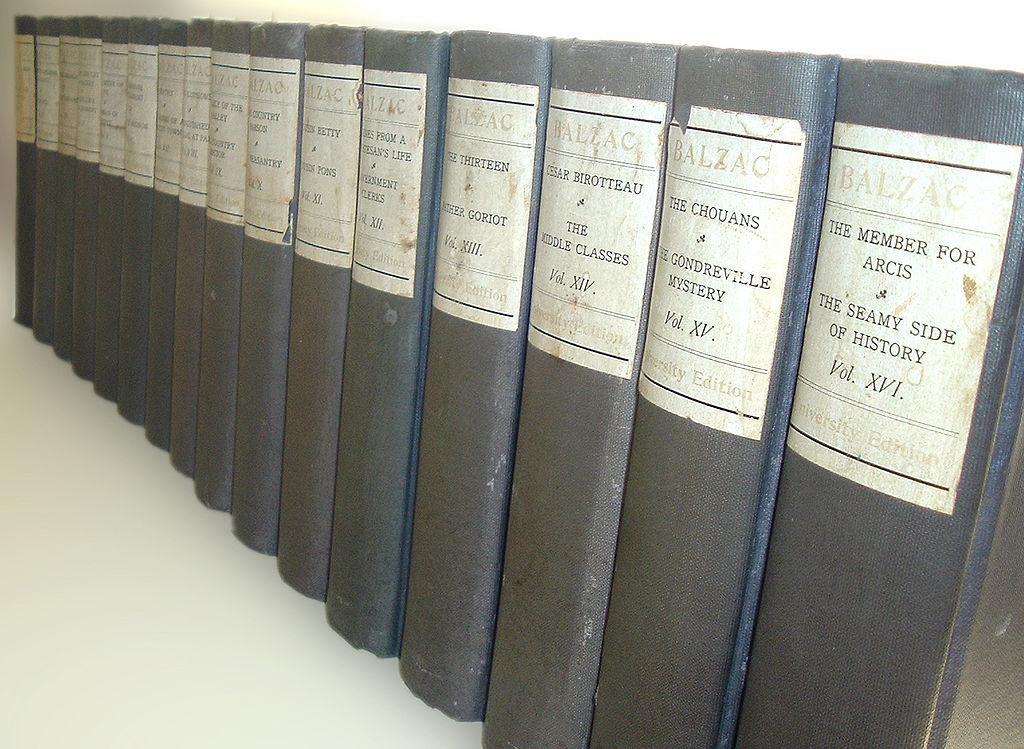