how technology interacts with speaking and writing

Most people think that writing and speaking a language are more or less the same thing – that writing is speech transcribed onto paper. The fact is that they are two different (though closely related) systems, and writing is an abstract system of symbols for representing the spoken language. There are some languages which are spoken but which have no written equivalents, and there are some languages (computer code for instance) which are never likely to be spoken. Richard Sproat in this wide-ranging study Language, Technology, and Society emphasises from the start that the most important connection between speech and the written language is the technological invention of writing. He takes the radical line that most written languages have built into them a strong element of encoding the sound of the language – including even Chinese, which many people imagine to be entirely ideographic. 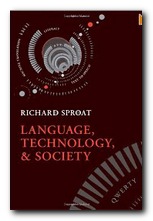 He examines a number of languages – Arabic, Chinese, Phoenician, Egyptian – to demonstrate that they have this thing in common, even though some are written without vowel sounds, and some are written right-to-left in sequence. Next he covers the issue of decipherment – how we can understand ancient inscriptions such as the Rosetta Stone and Linear B. The examples he looks at add up to further evidence that even apparently ideographic languages such as Egyptian hieroglyphics were not properly decoded until it was recognised that they recorded the sound of a spoken language – even if improperly, and mixed with symbols and ideograms.

In a chapter on literacy he demonstrates fairly convincingly that the relative complexity of the writing system has little or no relation to rates of literacy. Chinese and Japanese children have to learn thousands of symbols representing the words and concepts in their language, as against the twenty-six or so letters learned by children in most western European languages.

it is remarkably simple to make the case that literacy is a product of economics and indeed, has little or nothing to do with the complexity of the writing system in use in a country.

To raise standards of literacy in a society, ‘all’ that’s required is to raise the living standards of its inhabitants.

There’s a chapter on the history of the typewriter – a technological phase which was quite short lived, but which has left us with the legacy of the QWERTY keyboard layout. Despite the fact that alternatives to this have been invented, QWERTY has prevailed, largely he argues, because it is quite good ergonomically.

He finishes with two chapters which are clearly dealing with his own specialism: (he worked at AT&T Bell Laboratories for eighteen years. The first of these is on speech recognition technology, and the second on machine translation (MT) which he argues has come a long way since it first began during the Cold War. But it still has a long way to go, as even Google will demonstrate if you ask it to translate a web page into a second language you understand.

There’s a full academic apparatus of endnotes, glossary, bibliography and annotated suggestions further reading, yet I was rather surprised that throughout the whole of this very thorough study he made no reference to some of the seminal texts on the relationship between language writing and technology. For these you will need to move on to Walter Ong’s Orality and Literacy, Henri-Jean Martin’s The History and the Power of Writing, and Jay Bolter’s Writing Space.