aesthetic theory from the classical period to the present

Gary Day’s main argument in his impressive study Literary Criticism – a new history is that literary criticism is like a pendulum that swings backwards and forwards in different historical epochs. At one moment it emphasizes the text, and at the next its effect upon the reader. He traces all the main schools of literary criticism, starting with classical Greek and Roman writing on aesthetics, and he shows that many of the notions people imagine to be new have actually been around for two thousand years or more. This makes his book a good antidote to the mistaken idea that literary criticism began in the 1970s with the discovery of French structuralism. 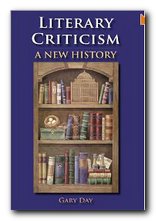 He takes the history of both literature and literary criticism through the distinct phases of its historical development, starting with the classics, then looking successively at Medieval, Renaissance, Enlightenment, Romantic, and Modern phases. His emphasis on the whole is on English criticism, though it does not preclude an occasional consideration of other cultures.

His examination of criticism relating to the earlier periods has the instructive effect of condensing their ideas and ‘theory’ into digestible chunks. He points out that in the medieval period for instance there was no concept of either literature or criticism as we know them – only ‘commentary’ on sacred texts. The Greco-Roman classics for instance were interpreted as guides to (Christian) moral behaviour. The medieval period also gave rise to the concept of the auctor (author). It also saw, towards its end, the rise of the written vernacular. Latin was the language of learning, but as trade between nations increased there was more reason than ever for people to use and learn each other’s native language.

In the Renaissance period Day argues that a crucial issue was the Protestant-inspired translation of the Bible into English. This gave the common man both access to divine scripture and the right to its interpretation – previously only in the remit of the church itself. The introduction of printing and the establishment of a vernacular English that pushed out Latin and French as the lingua francas of official discourse led to the publication of books for readers’ pleasure. This in turn gave rise to a literature of the popular marketplace and a need to make distinctions between such products and a canon of revered classics. It is easy to see the point that Gary Day makes several times throughout this study – that many of the critical issues debated with such recent ferocity were evident in literary history centuries ago.

His chapter on the English Enlightenment draws interesting parallels between criticism and finance. If the intrinsic value of a paper five pound note was certainly not five pounds, because there was not a one-to-one correspondence between signifier and signified, so the value of a work of literature could not be determined by the accuracy of its correspondence with some value in the real world.

There is a strong period of Neoclassicism in the eighteenth century that Day attributes to a desire for order, proportion, and rule-based authority after the uncertainties created by the Civil War. However, he argues that it failed to take permanent root and only sprang back into life now and again during politically reactionary phases.

In his chapter on the Romantic period he argues that the cult of individualism, ‘sensibility’, and nature was a reaction to the industrial revolution which reduced man to a mere part in the economy of mass production. Thus the literary criticism that emerged emphasized the possibilities of individual response to and interpretation of a text. This tendency reached its apogee in the art for art’s sake movement at the end of the nineteenth century when all connections between art and moral improvement were finally denied completely.

When it comes to the twentieth century he understandably sees Freud, Max Plank and Picasso as exemplars of revolutionary thinking, though the literary critics he first considers are the very unfashionable Walter Orage and G.K. Chesterton. But in fact the main focus of interest in his final chapter is the establishment of English Studies in the UK university system – a surprising phenomenon both in its recency and the controversy that surrounded it.

Fortunately, he does finish by looking at three major figures critics who were influential from the mid-century onwards – I.A.Richards, William Empson, and F.R.Leavis. He explains their critical methods and their significance, and finally lets himself off the leash to take a few well-aimed swipes at Catherine Belsey, who is obviously his bete noir.

This is not simply gratuitous rival-bashing however, for one of Day’s habits that I found quite entertaining was his demonstrating links between debates held centuries ago with those of the last two or three decades – to show that there is very little that is totally new under the sun. And he is also much given to taking pot shots at the current academic culture of ‘skills’ and ‘performance indicators’ that have come to replace a serious interest in the subject of literature and literary criticism.

He has very little to say about contemporary forms of literary criticism which range from feminism, postcolonialism, post-Modernism, and queer theory – except to conclude somewhat radically that

the sheer variety should not distract us from one fundamental truth: that the demands of bodies like the Quality Assurance Agency are making the study of literature ever more prescriptive for students while the Research Assessment Exercise has distorted it for academics. Criticism is better off outside the academy.

This sort of writing could signal the beginnings of a long overdue and very welcome change in the practice of academic literary criticism.