Oxford Modern English Grammar is the Oxford University Press brand new and definitive guide to English grammar. It’s a book written by a leading expert in the field that covers both British and American English. and it makes use of authentic spoken and written examples. Arranged in four clear parts for ease of use, its comprehensive coverage ranges from the very basic to the most complex aspects of grammar, all of which are explained clearly yet authoritatively. As a source of reference it’s invaluable for those with an interest in the English language, undergraduate and postgraduate students, and it will be useful to anyone else who would like a clear guide to English grammar and how it is used. 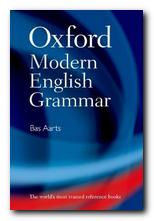 The author Bas Aarts warns that the book is descriptive, not proscriptive in approach.

Readers hoping to find confirmation that the so-called split infinitive is an odious manifestation of the decline of the English language – to give but one example of a common usage shibboleth – will be disappointed.

So – if it doesn’t provide a list of rules of what is and what’s not permissible – what does it have to offer? The answer is – an explanation of the basic principles and structures of English language as it is currently used. Arts begins by clearing the decks to establish the terms in which grammar can be discussed. And this means items as fundamental as what can be said about a single word and how it can be used – which immediately involves issues such as word classes, tense, mood, and the place in a sentence where the word is used.

Next comes the system of inflection which can modify words – which is mercifully (for non-Native learners) minimal in English language, making it easier to learn in its earlier stages at least. He also looks at the way in which new words can be formed or changed – by conversion, back-formation, clipping, and blending (he bagged the goods – recycling – flu – smog).

I was heartened to see that despite his descriptive approach, a firm emphasis was put on the necessity for a subject in a clear English statement, preferably at the start of the sentence or utterance. Statements such as deleted it manually do not begin to make any sense until they are preceded by I, she, or they.

There are entire chapters on tense and mood, which can be quite complex because of the way temporality and mood are constructed in English from strings of verbs – as in examples such as I will have been living here for five years – You might be about to realise that ….

This is a reference work, and just because it doesn’t offer proscriptive rules doesn’t mean that there are no mistakes or unacceptable uses in English. To say the painting was executed brilliant, with also vividly colours is just wrong, and no two ways about it.

There are appendices of irregular verbs (abide/abode/abided – lie/lay/lain) detailed references to sources, and suggestions for further reading on all topics. All the examples he chooses are taken from the database of the International Corpus of English held at University College London – a compilation of spoken and written English taken from living contemporary sources.

It has to be said that the coverage is thorough and rigorous, but very dry. It’s a series of internal principles which have been extracted and documented from contemporary usage. For advice on how to speak and write properly you would have to go elsewhere (such as here for instance). It’s a reference for the college library or the shelf of a linguist or a grammarian – if there are any of those around any more.