Pomegranate Seed first appeared in the Saturday Evening Post on 25 April 1931. It was subsequently included in Edith Wharton’s collection of short fiction, The World Over (1936), and then in her collection, Ghosts, published in 1937, the last year of the author’s life. 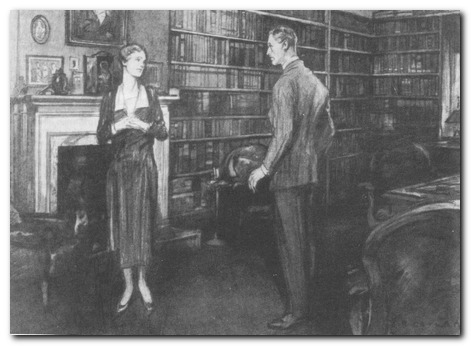 This is simultaneously a mystery tale, a ‘ghost story’, and more importantly a penetrating study in the psychology of jealousy. The mystery element is possibly the least important and successful, because once the authorship of the grey letters has been explained, there is very little more to say about the issue, and no reason to re-read the tale.

As a ghost story it is more successful. Even though there is no explanation of how the letters come to have been written by somebody who has died a year previously, they act as a convincing metaphor for the influence a former love object might still exert on someone from beyond the grave. This part of the story also meshes successfully with Charlotte’s inflamed jealousy over the puzzle of the letters and the effect they have on her husband. She is in fact quite correct in he supposition that they were written by a woman who is a ‘previous engagement’ in his life – since they are written by the woman to whom he was married for twelve years.

The rapid fluctuations in Charlotte’s feelings as she tries to interpret the evidence at her disposal is a very convincing portrayal of the agonies and uncertainties of jealousy – how trivial details are seized upon and magnified to enormous proportions in the search for emotional resolution, and how a hairsbreadth can sometimes separate an imagined betrayal from an insight into one which is all too real.

The title of the story Pomegranate Seed is an oblique reference to the Greek myth in which Persephone, the goddess of fertility, is abducted and taken to Hades, where she breaks her vow of abstinence by eating some pomegranate seeds. It is not too difficult to see the fertile Elsie Corder (who bears her husband two children) as this figure who eventually lures her former husband to join her in the afterlife. She has written to him regularly; her last letters are only two days apart; and the only word Charlotte can decipher in the last is “Come” – though it has to be noted that he does not read this letter, having already departed to join his dead first wife.

Tales of Men and Ghosts – eBook formats at Project Gutenberg

Part I.   Charlotte Gorse has been married to New York lawyer Kenneth Ashby for a year, following the early death of his first wife Elsie after twelve years together. Charlotte’s marriage has been successful, but she is puzzled by the regular appearance of a handwritten letter addressed to her husband which appears to upset him and change his mood, but about which he reveals nothing. On arriving home there is familiar grey envelope with spidery handwriting waiting in the hall.

Part II.   She assume’s the letters might be from some woman in her husband’s past, is very tempted to open the latest, but instead spies on him when he arrives home. On seeing him kiss the letter, she challenges him and demands an explanation. He claims it is a business letter and refuses to divulge the name of its author.

Part III.   Charlotte tries to be sympathetic to her husband’s obvious distress, but all she can see is that he is trying to be evasive. She proposes a holiday, but he says he cannot go. She continues to harass him with questions, and finally he agrees to the notion of a holiday.

Part IV.   Next morning he leaves a message saying that she should prepare for the holiday the very next day. Charlotte at first feels triumphant because she has prevailed over the influence of the ‘other woman’. She tries to contact her husband throughout the day – without success, because nobody knows where he is. Finally, she goes to see her mother-in-law, where she thinks he might have called. He is not there, so the two women go back to Charlotte’s house, where they find another grey letter waiting. Charlotte decides to open it, but neither she nor Mrs Ashby can read the faint and spidery handwriting. They conclude that the letters have been coming from Kenneth Ashby’s dead wife, from beyond the grave, and that they ought to telephone the police.