Pygmalion was written in 1912 and first performed in England at His Majesty’s Theatre, London in April 1914, with Mrs Patrick Campbell in the lead role as Eliza Doolittle. She was a fifty year old grandmother at the time (‘with increasing girth’) but impressed audiences with her delivery of both Cockney and received pronunciation. 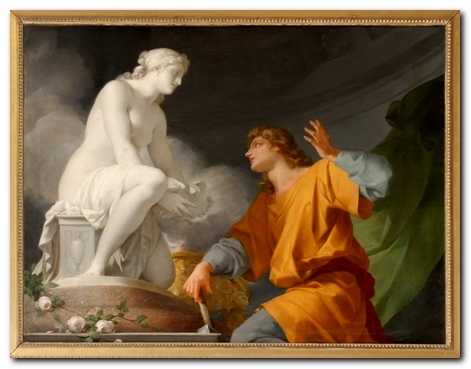 In Ovid’s Metamorphoses Pygmalion was a Cypriot sculptor who hated women and vowed never to marry. However, when he carved a statue of a woman out of ivory (called Galatea) she was so beautiful he fell in love with his own work. At the festival of Aphrodite (goddess of love) he secretly made a wish for a bride who would be a living likeness. On arriving home he kissed the statue and found that its lips were warm. The goddess had granted his wish, the statue came to life, and he married her. They had a son called Paphos.

As a subject of literary studies, the playtext of Pygmalion is a complex and problematic object. It is worth remembering that a playtext is only the intermediate vehicle of which a staged performance represents the ‘realisation’ of the text. Playtexts are only a recorded set of instructions to directors and actors – but in traditional literary studies (in Europe and America) they are treated as the equivalent of poetry and prose fiction.

Like many other plays, Pygmalion exists is a number of different versions. The controversial ending was changed on a number of occasions by theatrical producers and directors, and Shaw himself wrote supplementary materials which he added to the original play in an attempt to ‘explain its meaning.

The text itself is an almost bizarre mixture of literary modes. It begins with an essay on phonetics and a biographical sketch of the linguist Henry Sweet. The play itself is a combination of spoken dialogue and stage directions which vary from amazingly trivial details (‘on her daughter’s right’) to lengthy passages in prose fiction, fleshing out the mise en scene, and even intrusions by Shaw himself, passing comment on the events he is creating.

In its ‘complete’ form, the text also includes additional material for each Act which may or may not be performed and which were added for cinema adaptations. And the end of the play is now conventionally followed by a prose explanation of ‘what happened next’, written by Shaw four years after the first performance. This contains his justification for the absence of a conventional ‘happy ending’; generalisations about bachelors and marriage; and a development of the character of Clara Enysford Hill, someone who had barely figured at all in the previous five Acts.

Modern readers may find the language used by the characters nothing remarkable, but it should be borne in mind that at the time of its first performances Shaw was challenging the orthodox notions of decency on stage.

Higgins uses expressions such as ‘Where the devil are my slippers’ – which although it seems quite innocuous in the twenty-first century, probably marked the limit of what was acceptable in the early twentieth, when society was still emerging from a long age of Victorian prudery. But Mrs Pearce warns him that he should not swear in front of Eliza:

there is a certain word I must ask you not to use … It begins with the same letter as bath … Only this morning, sir, you applied it to your boots, to the butter, and to the brown bread.

Higgins doesn’t use the word. It is saved up by Shaw for the coup de theatre in Act Three when Eliza, having succeeded in transforming her pronunciation, lets slip her lower class origins when she replies to Freddy’s suggestion that he walk with her across the Park. She exclaims – ‘Walk! Not bloody likely. I am going in a taxi.’ The use of this single word bloody was enough to cause a sensation on the Edwardian stage.

In the early part of his literary career Shaw wrote five unsuccessful novels, and the instructions given to director and actors in Pygmalion suggest that he continued to think in the mode of someone writing prose fiction.

The stage directions range from issues of complete insignificance (slightly to her left) via what are authorial comments (hearing in it the voice of God, rebuking him for his Pharisaic want of charity to the poor girl) to the frankly absurd in terms of possible staging (Torrents of heavy summer rain).

In his preface to the play text, Shaw makes quite clear his interest in the subject of phonetics, as well as the origins of the Henry Higgins character in the figure of well-known Oxford philologist Henry Sweet.

Higgins claims he can pinpoint the origins of a London inhabitant to within a couple of streets by their pronunciation, and he is taking shorthand notes on Eliza’s speech at the beginning of the action.

Shorthand is a system of recording speech by symbols which represent sounds rather than the letters which are used for conventional writing. The best-known version of this system was devised by Sir Isaac Pitman in the middle of the nineteenth century, and became very popular in Britain and the United States.

There was a great deal of interest in these matters at the end of the nineteenth century, and Shaw put a great deal of time (and his own money) into a doomed experiment to reform English spelling. He and many others thought spelling in English could be simplified and regulated to iron out apparent difficulties. This approach did not sufficiently take into account the fact that speech and writing are two separate systems. The futility of these attempts were very pithily (and accurately) satirised by Mark Twain in his Plan for the Improvement of English Spelling.

It is worth noting that this same period also gave rise to another experiment in artificial language which was doomed to failure – the invention of Esperanto, a totally fabricated, so-called international language created by a Polish linguist Ludwik Zamenhof in 1887.

Esperanto was an amalgam of Latinate languages and it made sense to anyone who had studied French, Spanish, Italian and Latin. However, because of its artificiality and the fact that it did not therefore reflect a culture, it lacked life and remained a flat inanimate system of vocabulary and grammar.

My Fair Lady – at Amazon US

Daily Telegraph article
Mark Bostridge discusses the origins of the play, its sensational first night, and the problems of its controversial ending.

Mrs Eynsford-Hill with her daughter Clara and son Freddy are sheltering from the rain in Covent Garden after a concert with some others. When Freddy is despatched to find a cab he bumps into Eliza, a Cockney flower girl. She tries to sell her produce to a bystander Colonel Pickering, whilst nearby Professor Henry Higgins is taking notes on her pronunciation. Higgins then identifies everyone’s origins from their accents. It emerges that he and Pickering are both interested in phonetics and were on their way to meet each other. Higgins claims he can transform Eliza into a Duchess by changing her accent and speech. He gives her some loose change, which enables her to take a cab back home.

Pickering is visiting Higgins in his ‘laboratory’ when Eliza turns up, offering to pay for elocution lessons. She wants to speak properly so that she can get a job working in a shop. Pickering challenges Higgins to make her socially acceptable, and offers to pay for the lessons. Higgins patronises Eliza, but offers to take her on permanently when she reveals that she has no family. The housekeeper Mrs Pearce offers common sense objections, but Higgins over-rules them. Pickering wonders about Higgins’ probity, but Higgins reveals that he distrusts women and is therefore a confirmed bachelor. Mrs Pearce reappears to ask Higgins to be more careful about his language and his table manners, and announces the arrival of Eliza’s father, Mr Doolittle. After verbal skirmishes with Higgins, Doolittle arranges to sell Eliza for five pounds. As he leaves, Eliza re-enters in clean new clothes.

Some months later Higgins arrives at his mother’s house. She reproaches him for his lack of good manners and for still being a bachelor. He has invited Eliza to visit his mother on her ‘at-home’ day. The Enysford Hills and Pickering arrive, followed by Eliza, who speaks with exaggerated correctness. But during the ensuing conversation she lapses into topics from lower-class life and swears as she takes her leave. Higgins and Pickering congratulate themselves on the improvements they have brought about, but Mrs Higgins warns them that they have neglected to think about Eliza’s future.

Higgins, Pickering, and Eliza arrive home at midnight following her successful debut in society. Higgins complains that he is tired of their experiment and now finds the whole thing a bore. Eliza explodes with anger at his self-centredness. She perceives that she has no future. He suggests that she marry someone. They argue about what belongs to her, and he accuses her of treating him badly. They part violently on bad terms.

Next morning at Mrs Higgins’ house Higgins and Pickering arrive, worried that Eliza has disappeared. Mr Doolittle arrives, transformed into the appearance of a toff by the good fortune of an inheritance from an American benefactor. He complains that his newfound wealth has brought him nothing but problems. Mrs Higgins reveals that Eliza is upstairs and she hopes to reconcile her with her son. But when Eliza appears Higgins insults and patronises her again.

Eliza explains that she has learned to be a lady from the good example of politeness and respect presented to her by Pickering. Doolittle reveals that he is on his way to get married, and asks Pickering to help him through the ceremony. This leaves Higgins and Eliza to continue their argument. He claims that he cannot change and that he treats everybody in the same way. He continues to be arrogant and patronising, whilst inviting her back to live with him. She explains that a woman wants both respect and love, and that is what Freddy is offering her. When challenged by Higgins she claims she can even support herself by working in phonetics, something he has taught her so well. The play ends inconclusively.