The Age of Innocence (1920) is perhaps Edith Wharton’s most famous novel. It was written immediately after the First World War, when she had settled permanently to live just outside Paris. She takes as her subject three issues she knew very well from first-hand experience: old New York upper-class society of the 1870s, marriage, and divorce. She had been encouraged to take this as her material by her friend Henry James, who urged her to ‘do’ old New York. And like James she also included as a substantial fourth subject, the tensions between European and American culture. 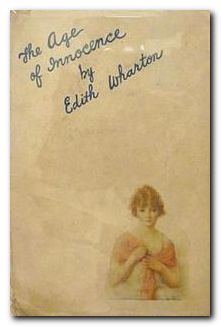 The Age of Innocence – plot summary

Newland Archer is a rather conventional member of ‘old money’ New York society. He works half-heartedly in a legal firm and has just become engaged to May Welland, who is also a member of a respectable family. Into this group there suddenly appears Countess Ellen Olenska, an American who has separated from her Polish husband. Archer and his set try to arrange a dinner to integrate Ellen into New York society, but they receive refusals on the unspoken grounds that she is not respectable because of her tainted past. So her relatives appeal to one of the oldest families, the Van der Luydens, who invite Ellen to meet a visiting English Duke. The occasion is a social success, and it provides Ellen with the seal of approval she needs.

Archer visits Ellen (at her request) and is impressed by her bohemianism and her radical attitudes. He feels increasingly stifled by the expectations of his family and what he sees as the dull predictability of the married life ahead of him. Almost unknown to himself, he is attracted to Ellen and what she represents as a free spirit. Archer is asked by his law firm to handle the case Ellen wishes to bring against her husband for divorce. New York society prefers to avoid such a scandal, and Archer is successful in managing to persuade her against the action.

When his fiancee May goes south for a winter holiday, Archer follows Ellen to a weekend in the country, but their intimacy is spoiled by the arrival of Julius Beaufort, of whom Archer feels jealous. Archer then abruptly visits May on her holiday, where he tries to convince himself that he still wants to marry her. He asks her to bring their marriage date forward. She wonders if there is somebody else in Archer’s life – and he is relieved to discover that she is thinking of someone in his distant past.

Returning to New York, Archer finally manages to arrange a private audience with Ellen, whereupon he declares his love for her. She reciprocates his feelings but argues that having provided her with his protective friendship, he should now stand by his engagement to May. She feels it would be dishonourable to take advantage of people who have shown her friendship. On returning home he receives a telegram from May announcing that she will marry him in a month’s time.

On his wedding day Archer is oppressed by the weight of expectancy and tradition that he realises marriage will entail. Even on his honeymoon he also realises that there is an emotional and intellectual gulf between himself and May – though he realises that she is likely to be a good and loyal wife.

He continues to be disturbed by visions of Ellen. He follows her to Boston where she has just turned down an offer to re-join her husband. Over a private lunch they agree that they must stay separate and love each other from a distance. Archer also meets Count Olenski’s emissary, who pleads that Ellen should remain in America, and reveals that Archer’s family now want her to return to her husband.

Beaufort’s bank crashes, which indirectly affects Archer’s family. At the same time the family dowager matriarch Mrs Mingott has a stroke. Ellen is summoned from a retreat in Washington to live with her and provide support. Archer proposes to Ellen that they should commit themselves to each other in some sort of alliance, but she refuses on the grounds that this would put them both outside society. She finally suggests to him that they spend just one night together before she returns to Europe.

The love tryst fails to materialize, and Ellen is given a send-off dinner, at which Archer realises that everybody believes that he and Ellen are lovers. This is their way of getting rid of the social problem without even officially recognising it. Archer has decided to follow Ellen to Europe, but when he attempts to confess all to May, she reveals that she is pregnant, and has told Ellen about it earlier.

Twenty-six years later, after a faultless life of public service, Archer is visiting Paris with his son Dallas, who has made an appointment to visit his relation Countess Olenska, who still lives on the Left Bank. Dallas reveals that his mother (as she was dying) told him about the relationship between Archer and Ellen. Archer despatches his son to meet Ellen, but does not go himself.

The Age of Innocence – study resources

The Age of Innocence – Oxford World Classics – Amazon US

The Age of Innocence – Wordsworth Classics – Amazon US

The Age of Innocence – Penguin Classics – Amazon US

The Age of Innocence – Norton Critical Editions – Amazon US

The Age of Innocence – eBook formats at Gutenberg

The Age of Innocence – audioBook version at Gutenberg

The Age of Innocence – Video