The Invention of Morel (1940) is a science fiction novella by the Argentinean writer Adolfo Bioy Casares. It was his seventh book, but the publication launched his reputation as a major Latin-American writer. It was awarded the First Municipal Prize for Literature of the City of Buenos Aires in 1941. Bioy wrote many other novels and short stories, some of them in collaboration with his friend, Jorge Luis Borges, whose sister Norah designed the cover of the first edition. 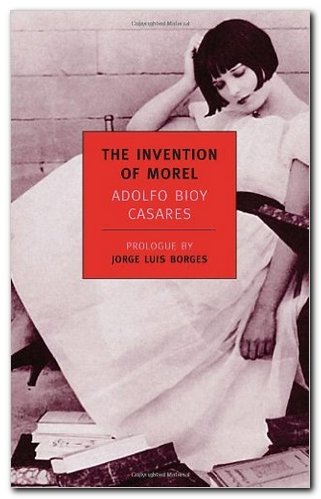 The Invention of Morel – critical commentary

The Invention of Morel relies heavily for its dramatic effect upon a plot device which is only revealed to the reader half way through the book. The critical commentary that follows therefore contains plot spoilers which it would be unfair not to announce before you read any further. If you are not already acquainted with the story, but want some idea of what it is about – limit yourself to the first four paragraphs of the plot summary below.

Bioy Casares is best known via the recommendations of his friend and fellow Argentinean writer Jorge Luis Borges. The Invention of Morel is no exception in carrying his endorsement: “To classify it [the novel] as perfect is neither an imprecision nor a hyperbole”. The Mexican poet Octavio Paz is even more emphatic, calling it “the perfect novel”.

But this is not a novel in the normal sense of the term. It is a short science fiction fantasy; it has only one meaningful character; and the narrative is concerned almost exclusively with the development of his fears and his reactions.

The only other named characters in the story are not developed in any way and they do not interact with each other. In fact they cannot interact – because they are only recorded projections from Morel’s machine, acting out the same scenes over and over again.

But the book does have a legitimate claim to being a successful novella. Its events take place in one location; it has one central character; and it is concerned with one idea – the notion that human life can be recorded and re-transmitted.

The island itself acts as a controlling image or metaphor. It is a curious mixture of pestilence and advanced technological development – which combines the two threats that confront the narrator. – extinction by disease or by Morel’s invention.

It is a short narrative, permeated by the narrator’s fear of being apprehended, and it is ‘open’ at both ends. We are offered no real explanation why he has to be there, and at the conclusion we do not truly know if his attempts to unite himself with Faustine will be successful or not.

At a crude statistical level, the story is less than 100 pages long – approximately 33,000 words. This is the length of a novella, not a novel. Distinctions between. the two genres are often difficult to make. There are busy and crowded novellas, just as there are short and spare novels. But the unities of a single character, location, and dramatic event in this narrative make it a novella rather than a novel.

The strongest feature of this work is the central conceit of ‘recording’ human life – the technology involved, and the implications for the fictional characters and their virtual counterparts. Morel’s invention is just about acceptable as science fiction. We know that such a machine is not possible, but we can suspend our disbelief for the sake of a drama in which a ‘real’ human being falls in love with the artificial image of a beautiful woman.

The narrator even becomes jealous of her possible relationships with other artificial images, and he is finally prepared to risk death by merging himself with the recorded world in which she exists.

We do not know what the narrator is escaping from – though there are hints that it is some sort of political problem. But Bioy conjures up very successfully a sense of fear and paranoia as the narrator struggles to adjust to the environment and distinguish reality from hallucination in his fervid state of mind.

The explanation for the mysteries that baffle him (Why do visitors on the island ignore him? Why are there two suns?) are cleverly withheld until half way through the story. After the details of Morel’s invention are revealed, dramatic interest switches to what the narrator can do about his situation. He is in both an existential and a metaphysical trap, and his only solution to the problem puts his own life at risk.

The first part of the narrative is designed to build mystery and tension as the narrator (and the first-time reader) struggles to understand the events in which he is embedded. He changes his mind about his interpretation of events; he thinks he might be hallucinating; and at one point he even thinks he might already be dead.

The problem with the narrative is that there is very little contextual relationship between these earlier scenes of paranoia and the later revelation of Morel’s invention. At the outset the narrator is suffering from the fear of being captured, and he is beset by the privations of living on a desert island. The first few entries in his diary are almost a re-enactment of Robinson Crusoe, with details of tides, food shortages, and the rotting plant-life of a tropical island.

The other main problem is the status of Morel, about which Bioy seems to be ambivalent, since Morel operates as both a ‘real’ character and as an ‘image’ in one of his own recordings. In order to construct the machine and its wave-powered supply of energy in the first place, Morel must be a ‘real’ (fictional) human being, on the same plane of reality as the narrator. Or to be more accurate, we can say that he must once have been a real human being.

Later in the story, Morel explains that he has assembled the visitors for a week’s visit to the island which he has recorded, so that afterwards they can all exist ‘for eternity’. This declaration itself cannot be a recording, and when someone reveals that previous participants have died, Morel takes umbrage and disappears.

Moreover, if previous characters in his recordings have died, we are given no explanation why he has not died himself – since he has recorded himself talking to Faustine and has taken part in earlier experimental recordings.

A similar problem arises in the case of the visiting ship. The narrator records in his diary: “The only ship I have ever seen from this island was Morel’s, and that was only the image of a ship”. Yet Morel has earlier claimed that the only person who knows how to navigate the reefs that protect the island is “our captain, McGregor”. This is the (presumably real) person from whom Morel has rented the ship. So McGregor too seems to exist as part of a projected image at the same time as being a fictionally ‘real’ person. In this story, he cannot inhabit both spheres of being, even consecutively.

Maybe this is demanding rational explanations for what after all is a science fiction fantasy. Perhaps it is like demanding to know how someone could really become an Invisible Man or how Dr Frankenstein successfully assembled the parts of his monster. But it is not Morel’s recording and transmitting devices which are the fictional weaknesses: it is the fact that Bioy seems to lose control of their implications – ironically enough, just like Morel himself. As the author, Bioy appears either not to have thought through the implications of his conceit, or in terms of the logic of the narrative he is in a sense having his fictional cake and eating it as well. 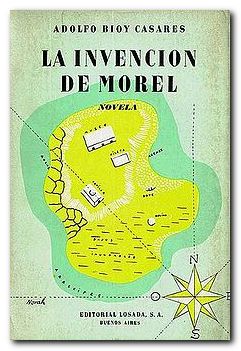 The Invention of Morel – plot summary

An un-named narrator and fugitive has escaped to a tropical island somewhere in Polynesia. Although we do not know the nature of his wrong-doing, he has an almost paranoid fear of being recaptured and imprisoned for life. He is keeping an account of his existence on the island, a diary in which he records his intention of writing two books.

From the sound of footsteps, a record player, and voices, it appears there are other people on the island, but the narrator at first hides away from them and accuses them of snobbery for ignoring him. Swamps on the island are fed by erratic tides, and they carry a strange disease which causes human flesh to rot. The tides also generate power which is supplied to a building called a ‘museum’ which he visits to search for food.

Every day at sunset he sees a mysterious gypsy-like woman who sits looking out to sea. He becomes fascinated by her, but is meanwhile consumed by fears of being detected. The woman is called Faustine, and she has conversations in French with a bearded man named Morel. When the narrator decides to approach them, they take no notice of him.

The narrator realises that Morel and Faustine repeat the same conversation that they had the previous week. One day when she does not appear, the narrator searches the whole island, but Faustine and all the others have disappeared. But then they suddenly reappear with new visitors at a dinner in the museum. The narrator sees two suns and two moons, and tries to find an explanation for the mysterious ‘intruders’. He thinks he may be hallucinating, invisible, or already dead?

The island is visited by a large boat, from which the captain and his crew disembark. The narrator fears that Faustine will leave the island. There is a party atmosphere, and the inhabitants are eventually addressed by Morel. He explains that he has invented a machine which can ‘record’ and then ‘replay’ complete human beings. He has recorded the group’s visit to the island, and their existence is being endlessly re-boadcast.

One of the visitors claims that earlier experiments using the machine resulted in death for the participants. Morel is annoyed and leaves the meeting, whereupon the narrator seizes his lecture notes. The narrator moves into the museum and starts to live amongst the images, following Faustine around and even sleeping on the floor in her bedroom.

He thinks Morel might have been deceived by his own invention, and he speculates about other machines which could take Morel’s invention one stage further, giving images an independent life. He begins to enjoy the repetition of the images, and resents the haphazard nature of his own life.

One day when the images fail to appear, he goes into the basement of the museum and re-starts the machines. He records himself for a week, inserting himself into the other recordings so that he and Faustine will be together for eternity. He begins to lose his sight, his body starts to disintegrate, and he ends the diary with an odd patriotic note to Venezuela and the hope that someone else will invent another machine so that he can enter the consciousness of Faustine.

The Invention of Morel – study resources

The Invention of Morel – in English – Amazon UK

The Invention of Morel – in English – Amazon US

The Invention of Morel – principal characters