The Muse’s Tragedy first appeared in the Scribner’s Magazine number 25 for January 1899. The story was included in the first collection of Edith Wharton’s short stories, The Greater Inclination published in New York by Charles Scribner’s Sons in 1899. 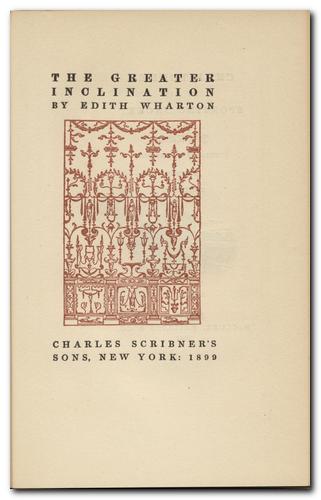 The principal feature of interest in this early story is the manner in which the narrative is composed. It has a remarkably poised structure, and although its is essentially a ‘reversal of expectation’ tale, Wharton brings quite an original approach to the arrangement of events in the narrative – particularly in omitting what would normally be considered a crucial part of the narrative.

In the first two parts of the story events are related from Lewis Danyers’ point of view. We learn of his admiration for the work of Victor Rendle, and his feeling of good fortune on meeting the still-attractive Mary Anerton, the muse of Rendle’s most famous poems. These two elements appear to be successfully fused when at the end of their stay at the Hotel Villa d’Este she persuades him to write a study on Rendle and agrees to help him work on it.

They go to Venice and spend a month together, during which time we learn (later) that Danyers falls in love with Mary Anerton and asks her to marry him. But none of this information is relayed directly. In fact the whole of their stay is omitted from the narrative. Instead, Wharton jumps ahead to the day following its conclusion, and part three of the story is a letter written by Mary explaining to Danyers why she cannot marry him.

The letter explains her past as the muse of Vincent Rendle, her devoted love for him, and her disappointment at not being loved in return. All the earlier information Danyers has gathered seemed to point towards a secret affair between the poet and the woman who inspired his best work. She was after all married to Mr Anerton, who tolerated Rendle’s close relationship with his wife, and even invited him on holiday with them.

But the bitter irony for Mary is that though she worshipped Rendle for fifteen years, her love was not reciprocated, and she is left wondering what it might be like to be loved for herself alone. She has found out during her four weeks with Danyers in Venice, but she feels that although she loves Danyers, she cannot allow him to marry a ‘disappointed woman’.

The letter explains some her earlier behaviour, including her cool reception of Danyers’ essay on Rendle. By the time of receiving the essay, Mary Anerton has become galled by the irony of being viewed as the muse of Rendle’s work – because he has taken the inspiration from her, but offered nothing in return. It also explains why she has been happy to spend a month together with Danyers without once discussing the proposed study of Rendle and his work. By this point she is heartily sick of the work she has inspired. That is her ‘tragedy’.

The Works of Edith Wharton – Amazon US

Part I.   Lewis Danyers is a young American who has written a prize-winning essay on the poetry of Vincent Rendle, much of whose work has been inspired by his muse, Mrs Mary Anerton. When Danyers’ friend Mrs Memorall reveals that Mary Anerton was her childhood friend, it fires his imagination and his desire to know more about the inspiration for so much great poetry. The public has been kept at bay by Rendle, and even Mary Anerton’s husband has been protective of the association with such a revered artist.

Since the death of both Vincent Rendle and her husband, Mary Anerton has become lonely and introspective. Mrs Memorall thinks she should remarry, but she did not marry Rendle when she had the chance. Danyers republishes his appreciation of Rendle, and Mrs Memorall sends a copy to Mary Anerton, where it receives a polite but cool reception. However, when he meets Mary at the Hotel Villa d’Este, she compliments him warmly on his work.

Part II.   During their stay at the hotel, Danyers gets to know Mary Anerton very well, and he realises that she knows every last detail of Rendle’s work, and also that she has an original intelligence of her own which is reflected in the poetry. May encourages Danyers to write a book on Rendle, which he agrees to if she will help him work on it.

Part III.   They spend a month together in Venice, during which time it becomes obvious that they have fallen in love and he has made her a proposal of marriage. Mary writes Danyers a letter the day after the end of their sojourn explaining why she cannot accept his offer and giving a full explanation of her relationship with Vincent Rendle.

She was in love with Rendle and he was inspired by her – but he only regarded her as a friend. She gave up fifteen years of her life to him and has emerged empty-handed at the end of it. People assumed she was his lover, but this was not true. She has even edited his letters to her, making it appear as if they omitted personal details and references – when there was nothing there in the first place.

He even continued sharing his ideas on poetry with her whilst he was chasing after a young girl in Switzerland. When her husband died, her hopes rose – then fell back again when Rendle merely resumed their old friendship. When Rendle himself dies, she becomes famous as his love object. She goes through black periods and asks herself why Rendle didn’t love her, and wonders if she simply isn’t attractive to men.

This has led up to her month in Venice with Danyers. She was attracted to him and wanted to be loved for herself – not because she was the muse of somebody’s poems. She realises that Danyers loved her for herself, and they spent a month in Venice without even mentioning the proposed book which was the ostensible reason for the vacation. Now, even though she has discovered what it means to be loved, she feels she must renounce him to save Danyers from marrying ‘a disappointed woman’.