culture and society in post-Franco Spain

It’s easy to forget that only a few decades ago Spain was an under-developed country with a fascist dictator. Tourists were arrested for wearing shorts, and outside major cities many villages didn’t have electricity or street lighting. Today, Spain is one of the biggest, the most democratic, and technologically advanced countries in Europe. John Hooper’s book The New Spaniards is all about the social, political, and cultural consequences of this very rapid development during the last four decades. 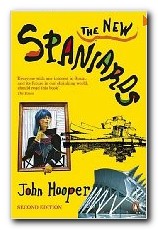 As he observes, it’s possible to see this reflected in a typical family gathering of three generations. The grandparents, reflecting a poorer agricultural past, will be short and dark; their children, beneficiaries of the post-Franco boom, and raised on a Mediterranean diet, will be tall and slim; but the grandchildren, victims of current prosperity, might well be overweight.

The first part of the book is a detailed political history of Spain following the death of Franco. His rule had held Spain in a fossilized state since the end of the Civil War in 1940. The aftermath was, unsurprisingly, a sweeping away of the old, corrupt, and backward-looking practices – to be replaced by an essentially socialist government dominated by one party.

Equally unsurprising was the fact that people who had been excluded from public life for a generation, when they came back in contact with it, feathered their own nests. Post 1980 Spain has a long history of local graft, corruption, kick-backs, and ‘influence’ which make it seem closer to the world of Italian Mafiosi than the rest of Europe. And I have to say that this sort of thing still continues in the part of Andalucia where I live part of the time.

He deals with all the features of Spanish society which outsiders find surprising and puzzling – such as the church, for instance. It’s been disestablished since 1986, yet the state supports it with public funding. Its membership has decreased since the advent of democracy, yet many Spaniards consider themselves Christians, and the slightly dubious Opus Dei organisation has its greatest numbers and influence there.

On sexual mores, the country has passed from being against topless sunbathing in the 1970s to accepting gay marriages thirty years later. The birth rate is declining, more women are working, and adult children are living at home as the family unit, which is seen as the bulwark against unemployment and the harsh economic climate of the 2000s.

John Hooper explains the astonishingly murky finances of the National lottery, and throws in the amazing fact that the Spaniards spend/lose more on gambling each week than they do on fresh milk, fruit, and vegetables.

That’s one of his strengths – bringing sociological data to life with striking examples. Against this, he has a slightly annoying habit of looping back historically into the nineteenth century. The idea is to show how certain political conditions have originated, which is understandable, but it produces the unfortunate effect of a book in which the narrative is going backwards.

He’s much more lively and interesting when he deals with contemporary life, such as why Basques, Catalan, and Galicians feel so keen on independence, why bullfighting is still tolerated in a country with strong support for animal rights (not dissimilar from fox-hunting in the UK) and how the Spaniards feel about the influx of second home owners who bring mixed blessings to the country.

There’s plenty of detail on the Spanish royal family which I could have done without, but his chapters on the press and the extraordinary explosion of modern art and architecture really bring alive the sense of renewal and positive exploration of new ideas which anyone who visits the country regularly cannot fail to register.