The Other Two first appeared in Collier’s Weekly in February 1904, and was included in the collection of Edith Wharton’s stories The Descent of Man and Other Stories which was published later the same year. Collier’s Weekly was a very popular illustrated magazine which featured articles on current affairs and high quality fiction on a regular basis. Arthur Conan Doyle’s Sherlock Holmes stories were making a big impact on the American public in the same magazine at this time. 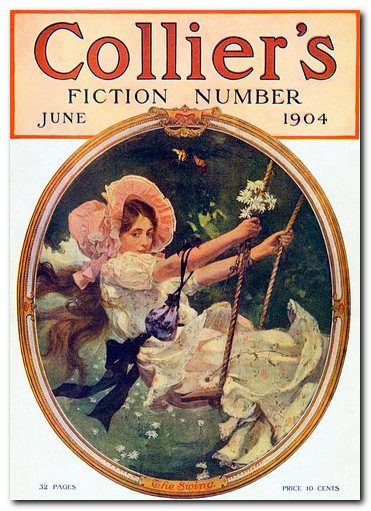 The Other Two – critical commentary

This is an amusing and lightly satirical story in which nobody is seriously harmed, but it rests on a quite serious social phenomenon which was relatively new at the time – easier access to divorce, and the possible consequences. As Waythorn ruefully observes of his wife’s skill in arranging relations between himself and her two ex-husbands – ‘she had discovered the solution of [sic] the newest social problem’.

Alice Waythorn’s first marriage is to a shabby, insignificant man who Waythorn thinks looks like a ‘piano tuner’ and who he regards to be of no social consequence at all. Alice claims that the marriage ended because he was a ‘brute’. But Haskett turns out to be a mild, decent man who has made great personal sacrifices to stay close to his daughter Lily, the daughter who her mother clearly neglects.

Having divorced Haskett, she marries Gus Varick who is more prosperous, and this gives her the social lift she is seeking: ‘Alice Haskett’s remarriage to Gus Varick was a passport to the set whose recognition she coveted’. But after a few years she ditches him in favour of Waythorn – who she treats in a completely dismissive manner. On the very first night under Waythorn’s roof after their honeymoon, she is late for dinner, and she is clearly manipulating him to her own ends. She is in fact a social climber – a type who Edith Wharton went on to analyse in greater detail in the character of her anti-heroine Undine Spragg in the later novel The Custom of the Country.

The Other Two – study resources

The Other Two – eBook format at Project Gutenberg

The Other Two – plot synopsis

Part I.   Newly married Waythorn is eagerly anticipating a romantic dinner with his new wife Alice when she arrives home with the news that her first husband Mr Haskett wants to assert his visiting right to see Lily, his daughter, who is critically ill.

Part II.   Next day Waythorn encounters Alice’s second husband Gus Varick on the train going in to his office and sees him again in a restaurant at lunch time, savouring a liqueur in his coffee. He wonders if Haskett and Varick ever meet by accident in this way. That evening, after Haskett’s visit, Alice pour him a liqueur in his coffee by mistake.

Part III.   Gus Varick visits Waythorn to negotiate some business, and behaves in a civilized and gentlemanly manner. Waythorn then encounters Haskett visiting Lily and is surprised that he is a shabby, down-at-heel, and rather inoffensive sort of man. He wonders what Alice’s former life when married to him could have been like.

Part IV.   Haskett asks for a change of governess for Lily. Waythorn discovers that Haskett has made big personal sacrifices in order to remain close to his daughter – and that his wife has lied to him about Haskett. Meanwhile, Waythorn continues his amicable business relationship with Gus Varick and they even begin to socialize without difficulty. Waythorn sees his wife as a somewhat promiscuous woman.

Part V.   Waythorn gradually accepts that he only has a ‘share’ in his wife’s life. At first he treats the situation satirically, but then realises that he has the advantages of what Alice has learned from her two previous marriages. Finally, on an occasion when Haskett is visiting Lily, Gus Varick arrives at the same time, and the three men sit smoking cigars, until they are joined by Alice, who serves them all tea.