Piazza Tales is a collection of herman Melville’s shorter fiction. He started writing short stories as a desperate commercial venture to provide for his family, following the disastrous reception of Moby Dick on its first publication in 1851. His career as a writer had been in something of a steady decline from the start, and yet as he became less and less successful, he produced the works for which he is now held in the very highest regard – as a great artist who could tap into the fundamentals of the American nineteenth century psyche. 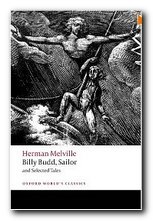 His stories are clouded in ambiguity and steeped in multiple levels of complexity. They have narrators whose intentions are not clear.They are often stories with very little narrative in the normal sense of that term. ‘A Paradise of Bachelors’ is little more than an account of a lavish dinner party in London’s Inns of court related in mock-heroic terms. Its companion piece ‘The Tartarus of Maids’ is the report of a visit to a paper mill.

The narrator of ‘Cock-A-Doodle-Doo!’ is shaken out of a misanthropic mood by the cheerful crowing of a neighbour’s cockerel. But when he eventually decides to buy the bird for its life-affirming powers, its owner dies – and so does the bird.

‘Bartelby the Scrivener’, one of his most famous stories, is startling in its simplicity. An elderly Wall Street solicitor employs a younger man as a clerk to copy legal documents. Bartelby works in complete isolation, and lives on nothing but ginger biscuits, sleeping in the office. But then he stops working, meeting every request to do so with the mantra “I prefer not to”. The solicitor is driven to good-natured despair, and finally has to move office in order to be rid of him. Bartelby is eventually placed in prison where he starves himself – and dies.

Melville’s prose is so allusive, so embedded with metaphors and symbols that it often seems that whilst writing about one thing he is actually talking about another. In ‘I and My Chimney’ for instance a man has a house with an enormous chimney. He takes laboured and curmudgeonly pride in the way it dominates the architecture of the entire building. But his wife, who restlessly devises new schemes for ‘improvement’, wants it pulled down. A struggle takes place between them, which he wins by stubbornly refusing to change his views.

It’s impossible to escape the interpretation that the chimney (and the house itself) represents the narrator’s (and the author’s) psyche, over which he wishes to assert his autonomy. And you don’t need a brass plaque on your front door to realise that it is also a commanding phallic symbol.

This collection includes two of Melville’s most accessible masterpieces. Benito Cereno is his re-telling of a historical incident involving a revolt on board a Spanish slave ship. The tale (a novella) is a study in sustained irony of the most chilling kind. Melville tells the story backwards by describing events as perceived by one ship’s captain when he goes to help the other. Everything he sees is menacing and inexplicable. Only when a disaster is narrowly averted is the reason for and the true horror of these mysterious conditions revealed.

The second novella is Billy Budd another apparently simple story with a naval setting. Billy Budd is a popular young sailor who is impressed into service on a British warship. His good looks and his naivety become the focus of malevolent attention from the ship’s master-at-arms, who falsely reports him to the captain for plotting a mutiny.

When confronted with this accusation, Billy becomes tongue-tied and strikes the master-at-arms with a blow that kills him. The captain is very sympathetic to Billy, but feels compelled to uphold the absolute code of military discipline. Billy is condemned to death and hanged the next morning.

This is a tale that has been interpreted in many ways – the most popular of which is Billy as Adam, fallen from paradise and grace into a cruel world. Claggart, the master-at-arms is seen as the devil or serpent – the embodiment of evil. And the ship’s captain, Vere, as a God-like figure, torn between paternal love and the need to exert justice.

Three of these stories have become landmarks of nineteenth century American literature. All of them are worth reading – and there is an added bonus, Melville has an amazingly rich prose style which combines a rich vocabulary, a slightly archaic form of syntax, and an amazingly flexible narrative voice in which he thinks out loud, talks to his characters, asks himself questions, and speculates freely about the very stories he is telling.