The Reckoning first appeared in Harper’s Monthly Magazine, New York, 1902. The story was subsequently included in Edith Wharton’s collection of short fiction, The Descent of Man and Other Stories published by Charles Scribner’s in 1904. It is one of the many stories she wrote which featured the ‘new ethics’ emerging from the relaxation of the divorce laws in the United States. 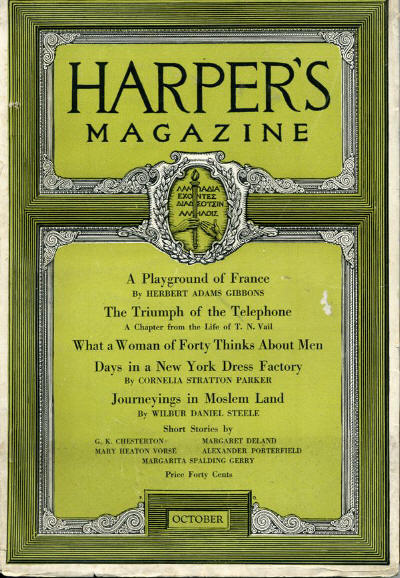 This is an amazingly mature work for the relatively young Edith Wharton, and proof positive that she was thinking critically about the issues of personal liberty within marriage, the grounds for divorce, and the possible consequences of sexual liberty, long before her own affair with Morton Fullerton in 1908 and her eventual divorce from her husband Teddy Wharton in 1912.

In tone, subject, and style the story represents a transition between the nineteenth and the twentieth century tradition of short stories. It has the understated world weariness of Maupassant and Chekhov, and the incisive, critical realism which was to come in the same decade from James Joyce and Virginia Woolf.

The story is very elegantly structured in three well balanced sections. The first introduces the Westall’s, their pact of individual liberty within marriage, and Julia’s first doubts when she sees her husband’s interest in a younger woman.

The second section provides a flashback to Julia’s first marriage to John Armant, in which she felt trapped by a relationship that to her had become stale. This explains the origins of her agreement with Clement that an individual must have the right to move on when the time comes. But now in the present, after ten years marriage to Clement, she feels threatened by the very agreement she has helped to generate between them.

The third section represents the lessons she learns. Feeling sure that Clement is leaving her for Una Van Sidern, she returns to her former home and realises that when she left her former husband John Arment, she took no account of his feelings at the time. He confirms that he was an unwilling participant in the divorce – but he forgives her in retrospect.

Part I.   Clement Westall has been speaking on radical proposals for personal freedom within marriage to a gathering of New York socialites at the Saturday salon of the Van Siderns. His wife Julia previously shared his views but now feels uneasy about their being made known in public – especially when they are enthusiastically embraced by the twenty-six year old Una Van Sidern, to whom her husband admits being attracted.

Part II.   Julia felt trapped in her first marriage to John Armant, and she married Clement Westall on the understanding that individuals should be free to move on by mutual consent when they felt the marriage had served its useful purpose. But after ten years of marriage to Westall she has come to believe that these ideas no longer apply in her own case. So when he plans to go ahead with another speech at the Van Siderns she asks him not to go. He asserts their old agreement to move on when they wish to form a new relationship.

Part III.   When he leaves to join the Van Siderns she feels her whole world collapse, as if she had been caught out by a new rule of her own making. She wanders about New York all day, uncertain what to do with her tumultuous emotions. Finally she ends up at her old home where her first husband still lives. She explains to him that Clement Westall is about to leave her for a younger woman, which has forced her to realise that when one person wishes to leave a marriage, the other may not, and may not understand the need for separation. She realises that this might have been the situation when she divorced John Armant, which he confirms to have been the case. She asks his forgiveness – which he grants her.