The structure of this introductory study of the short story as a literary genre is twenty short chapters, each one dealing with a different theme – character, orality, modernism, minimalism, urbanity, and so on. And each theme is explored with reference to three or four short stories considered in some depth. The advantage of this approach is that Paul March-Russell covers many neglected aspects of the short story: why it has declined commercially; how its reputation is propped up by university creative writing courses; and what has been the role of the little magazine in keeping it alive. 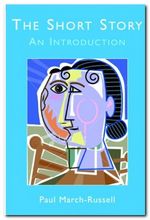 The disadvantage is that sometimes it seems as if everything is being skimmed over in a rather superficial manner. The other strength which is also a weakness is the sheer range of his examples – which is obviously the result of very wide reading.

He cover a huge variety of writers from America and Europe across the nineteenth and twentieth centuries and beyond. The names stream off the page at a bewildering rate. I suspect that this will inspire many young would-be writers to read more widely – which is the good part. But I sometimes wished he would dwell longer and explore fewer writers in more depth.

He also has the odd habit of mixing historical periods and writers without any restraint. Even his conglomerations of examples – J.P.Hebel, Rudyard Kipling, and Edgar Alan Poe – are bizarrely listed out of chronological order.

He considers all the possible variants of the short story – the parable, fable, folk tale, creation myth, and what he calls the ‘art tale’ – the conscious literary contrivance which he claims bridges the gap between the folk tale and the modern short story.

He also deals with the riddle as a sub-genre of the short story – one thing described as if it were something else, as if two non-identical things were the same. But I think he’s mistaken to include the novella as if it merely a long story.

As one chapter follows relentlessly after another – post modernism, minimalism, post colonialism – it becomes apparent that he is cataloguing his reading experience by its subject matter or the literary fashion to which authors have been ascribed. This impression is reinforced by the fact that there is no summarising chapter. He does not draw any general conclusions or produce any synthesis of his arguments.

In later parts of the book his themes – the city, the individual character – are examined with reference to novels and novellas, as well as stories, in a way which seems to confirm that he is more concerned with making use of his undoubtedly wide reading experience, rather than concentrating on the subject in hand – the short story.

This is a book with almost too much substance for its own good – too many illustrative examples – and too little concise argument. [I suspect it’s a re-vamped PhD thesis.] But if it leads readers on to further explorations of the neglected short story as a literary genre, that would be no bad thing.

One of his best chapters challenges the orthodoxy of Edgar Alan Poe’s theory of the short story (that it should be tightly focussed on unity of effect) and he even offers a defense of the much criticised O. Henry. There’s also an interesting chapter on the state of the short story in the UK today- which might well give aspirant writers pause for thought.

The good thing about these disparate reflections is that they do throw up many interesting topics which literary studies students can take further. As an introductory study, it fulfills that function well.