The Time Machine (1888-1895) is the first of H.G. Wells’ works which made him instantly famous as a writer of science fiction novels at the end of the nineteenth century. He had studied biology and zoology at the National School of Science in South Kensington (later to become Imperial College London) under the tutelage of Charles Darwin’s friend and supporter, Thomas Huxley. Wells’ first novels featured a number of issues in theoretical science on which he also speculated in his journalism – time travel, genetic engineering, inter-planetary warfare, ecology, eugenics, and space travel – all of which he crafted into short, very readable fictions that appealed to a very wide public. 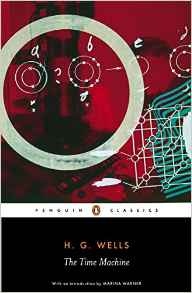 The Time Machine – a note on the text

The Time Machine first saw light of day as a short story called ‘The Chronic Argonauts’ Wells published it as a student in three editions of the Science Schools Journal (April-June 1888). It then appeared, after several re-writes, in 1894 as The Time Machine in National Observer. but the serial version was halted whilst still incomplete because the editor of the magazine changed.

However, his original supporter W.E. Henley became the editor of the New Review and encouraged Wells to revise and expand the work. It then appeared as a monthly serial between January and May 1895, attracting considerable attention even before it appeared in single-volume book form published by William Heinemann in May 1895.

For full details of the history and development of the text, plus revisions to subsequent editions, see the note by Patrick Parrinder in the Penguin Classics edition of the novel.

The conceits which underpin the credibility of the novel are developed in two parts. The first concerns the concept of what constitutes a ‘dimension’. The scientist (and time traveller) argues at the beginning of the story that if we can move in any one of three dimensions (length, breadth, thickness), and if time is considered the forth dimension, then why should we not be able to move in time as well? The idea is very seductive. Wells simply equates these ‘four’ dimensions as equal – and the rest follows naturally:

“There is no difference between time and any of the three dimensions of space except that our consciousness moves along it”, and “any real body must have extension in four directions: it must have Length, Breadth, Thickness, and Duration”.

This rather simplistic notion of time being a ‘dimension’ of the same order as length, breadth, and thickness is taken at face value by Wells, his outer-narrator, and the scientist himself. That having been argued (and ‘established’) Wells makes no effort at all to create a convincing method of explaining how these transitions in time will be made. Instead, the scientist constructs his time travel machine – a Heath-Robinson type of contraption, with ‘ivory bars’, ‘a brass rail’, ‘a saddle’, and a ‘starting lever’ which propels him eight hundred thousand years into the future. In a later essay (1933) commenting on his own work, Wells admitted that this was a form of literary-scientific sleight-of-hand:

For the writer of fantastic stories to help the reader play the game properly, he must help him in every possible unobtrusive way to domesticate the impossible hypothesis He must trick him into an unwary concession to get some plausible assumption and get on with the story whilst the illusion holds. … Hitherto, … the fantastic element was brought in by magic … It occurred to me that … an ingenious use of scientific patter might with advantage be substituted.

The second part of his conceit is the social conditions of the world his scientist visits. This world of the future (located in the Thames valley) of 802, 701 AD is comprised of a rag bag of elements that reflect interests Wells himself espoused – vegetarianism, socialist utopias, class conflict, and genetic mutation.

The creatures who live above ground – the Eloi – are etiolated and enfeebled because they have reached a stage of development in which all conflict and struggle has been removed from their lives. They exist in a state of idiotic collective bliss, surviving on a diet of fruit in communal halls. Even the differentiation between the sexes has almost disappeared. However, they are ‘supported’ by the Morlocks, who live underground and take their revenge for this injustice by eating the Eloi when they get the chance.

It is not entirely clear why the Morlocks, having mastered machinery, have not also retained the skills of husbandry, and why they are still afraid of light – including struck matches. Wells’ vision of a future world is not an altogether coherent set of circumstances, just a set of alarmist warnings.

It has to be said that for such an early work, the novel is very neatly constructed – in three parts. The first two chapters of the novel outline the scientist’s ‘theory’ of travelling in the fourth dimension and his presentation of the model version of his time machine to his dinner guests. The second and main part of the work is his account of the temporal journey and his adventures in the future – which he gives as a first person narrative. Then the third part returns to the scene of the somewhat incredulous dinner guests where the outer narrator takes over to report that the scientist has embarked on another journey and has not been seen for three years.

This conclusion suggests that either something has gone wrong and the scientist is ‘stuck’ in some future (or past) date, or that he has somehow become a permanent time-traveller with no reason to return to his earthly ‘present’. Both of these possibilities reinforce the illusion that the time machine actually ‘works’.

In her introduction to the Penguin Classics edition of the book, Marina Warner describes The Time Machine as ‘a long short story’ , and there are good arguments to support this view. The work is only 25,000 words long, and it is composed essentially of one anecdote.

But on the other hand the book is built on a large and powerful idea with universal implications – even if the theory is flawed. And the scientist’s exploits amongst the Morlocks and Eloi are more complex and substantial than constitute the material of a short story. So it could be argued that the work is a short novel or even a novella.

Regarding Wells’ quasi-scientific notions of ‘dimensions’ , there is an interesting but little-known novella which explores imaginary worlds of one, two, and three dimensions published only ten years earlier. It was written by Cambridge scholar and clergyman Edwin A. Abbott in 1884. . Flatland: A Romance of Many Dimensions explores (in a witty and fantastical manner) the idea that people living in a world of only x-dimensions cannot conceptualise anyone living in a world of x+1 dimensions. His examples range from people living in lines, squares, cubes, and spheres, and In one sense his satirical thesis supports Wells’ notion that time is merely another ‘dimension’. Abbott’s conclusion is that we, who live in a world of three dimensions, merely have difficulty conceptualising life in a world of four dimensions – or even more. 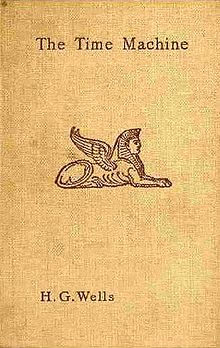 1   A scientist (the Time Traveller) is explaining the geometry of four dimensions – length, breadth, thickness, and time. He produces a model of a time machine and sets it off into the future or maybe the past. He has a full scale model in his laboratory

2   A week later a group of observers assemble for dinner at the scientist’s house in Richmond. He appears in a ragged and dishevelled state. After dressing for dinner he then tells them that he has been time travelling for eight days.

3   He tells how got into the machine, pulled its levers, and shot forward in time at a vertiginous pace, traversing years in minutes. When he stops he encounters a huge Sphinx figure on a bronze pedestal, then is approached by small long-haired people.

4   It is the year 802, 701 AD. The elfin-like folk take the scientist into a large dilapidated hall where they eat fruit around low stone tables. Many common animals have become extinct. He tries to learn their language, but they have very little patience or concentration. There is little differentiation between the sexes. He perceives this society as a form of cvommunism, a social paradise in which there is no disease, no traffic, and no conflict. He also sees it as a society which is ‘resting’ in its historical development, having eliminated the need to struggle.

5   After exploring the area overlooking the Thames he finds that his time machine has disappeared. He searches desperately, concluding that it has been hidden inside the bronze pedestal. There are no shops, no machinery, and no old or infirm people in evidence. He rescues a woman-child Weena, who becomes attached to him. He sees ghosts, waterless wells, and a strange white animal resembling an ape. He reasons that another species lives underground – the Morlocks – who are like slaves to the Eloi, who live above ground.

6   After fearful hesitation he climbs down a well and discovers a system of underground tunnels and a hall of machinery. The Morlocks attack him, so he escapes back to the surface again.

8   When they reach the Palace it turns out to be a derelict museum which he plunders, retrieving a crowbar, some camphor, and a box of matches [which are 800,000 years old].

9   In returning he sets up camp in a wood and lights a fire. But he falls asleep and is set upon by the Morlocks. His camp fire sets the woods alight, and this drives away the Morlocks, who are afraid of light.

10   He returns to the pedestal, to find its doors open and the time machine inside. But as he enters, the doors close and the Morlocks attack him again. He fights them off with matches and the crowbar, and then escapes in the time machine.

`12   He gradually returns to the laboratory and his dinner guests. They are incredulous, but he has some flowers of an unknown species in his pocket that were put there by Weena. Next day the narrator goes to see him again, but the scientist takes off in the time machine again. Three years later he has still not returned.

Epilogue   The outer narrator reflects that the scientist might have gone back into prehistoric times, or he might be in the near future, when all society’s current problems have been solved.

The Shape of Things to Come (1933) – Penguin Classics- Amazon UK