Typhoon was written between September 1900 and January 1901. It was serialized in Pall Mall Magazine from January to March 1902, and first published in book form by G.P. Putnam’s Sons in New York in September 1902. Conrad repeatedly revised the text for its various English and American appearances. These revisions are a combination of minor matters of spelling and more important changes to the presentation of his two main characters, Jukes and MacWhirr. 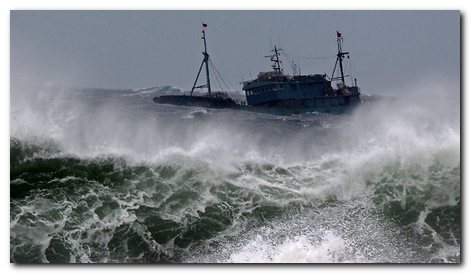 The most obvious quality of this tale is the masterful account of the violent storm at sea. Conrad manages to evoke the ferocity and the terrible impact of the hurricane winds, the torrential rain, and the tempestuous seas with strings upon strings of atmospheric synonyms without repeating himself. The ship is convulsed, attacked, and almost destroyed – yet it survives.

The Nan-Shan was being looted by the storm with a senseless, destructive fury: trysails torn out of the extra gaskets, double-lashed awnings blown away, bridge swept clean, weather-cloths burst, rails twisted, light-screens smashed—and two of the boats had gone already. They had gone unheard and unseen, melting, as it were, in the shock and smother of the wave.

The triumph of practicality

At the outset, MacWhirr’s stuffy and unimaginative conservatism and Jukes’ youthful enterprise and enthusiasm are posited as opposing characteristics. MacWhirr reads the maritime manuals on dealing with storms, but chooses to ignore them. Jukes is meanwhile dashing about the ship making sure everything is ready to survive the hurricane.

But as soon as the typhoon really strikes, Jukes thinks everything is lost and he despairs of surviving the experience; whereas MacWhirr simply sticks stubbornly to the ‘right thing’ and finds practical solutions to immediate problems. He does not allow himself to be deflected from the tasks required to maintain order.

When the fighting breaks out amongst the Chinese passengers, MacWhirr despatches Jukes to stop it. When he is attacked by the panicking second mate, he has no hesitation in slugging him. And when the problem of the coolies’ money could threaten their presence in port, he creates a just and simple solution to the problem by dividing the money equally amongst them.

MacWhirr is even cast in quasi-comic form at the outset of the tale – a short man who wears a brown bowler hat and carries an unfurled umbrella, no matter what the weather. But it is his calmness, his taciturn manner, and his meticulous attention to detail which in the end saves his ship, passengers, and crew.

Unusually for Conrad, this is a tale cast in third person omniscient narrative mode. He is able to switch freely from one point of view to another as the principal characters move around the ship during the typhoon.

The most impressive piece of narrative manipulation comes in the penultimate section of the tale where, having reached a calm point in the eye of the hurricane, Conrad has the gruff and taciturn MacWhirr realise that having reached this point in the ‘revolving storm’, there is another period of the typhoon the ship has yet to pass through

Before the renewed wrath of winds swooped on his ship, Captain MacWhirr was moved to declare, in a tone of vexation, as it were: “I wouldn’t like to loose her. [the ship]”

He was spared that annoyance.

This is wonderfully ironic understatement and lofty wit – for Conrad does not actually describe the second half of the storm, but immediately pans forward to its aftermath, with the Nan-Shan safely moored in Fu-chau harbour. And there, by describing the uncomprehending responses of the Captain’s and the engineer’s wives to the letters they receive, the toughness and heroism of the mariners is emphasised – as well as by implication, the gulf of comprehension which exists between those who have lived suburban lives on land and those who have braved extreme situations at sea which their loved ones simply could not comprehend.

The form of the narrative

Some features of this work might seem to suggest that it could be regarded as a novella. After all, it has only a few named characters, the very central figure of captain MacWhirr, the action all takes place on board the Nan-Shan, and the storm itself acts as a strongly unifying feature.

But working against such a claim is the fact that there is no necessary connection between the typhoon itself and the skirmish amongst the Chinese workers who are being transported back to the mainland. They form an important but not an integral part of the story. Interestingly enough, it was the plight of these workers (who are referred to as ‘cargo’) which first aroused Conrad’s interest: the typhoon was a secondary issue.

In addition to this, there is no real development, lesson, or outcome in the events. MacWhirr is the same man when he reaches Fu-chau as he was at the beginning – and so is Jukes. So the narrative, for the purposes of classification, seems to me a tale, which can stand with distinction alongside the many others of its kind in Conrad’s oeuvre.

A typhoon is a ‘severe tropical cyclone’ characterized by a low-pressure center, strong winds, and a spiral arrangement of thunderstorms that produce heavy rain. When these occur in the Northwest Pacific Ocean they are called a typhoon. The same phenomenon occurring in the north Atlantic Ocean is called a hurricane.

Part I. Captain MacWhirr is in charge of a newly built steam ship the Nan Shan, which has been transferred from a British to a Siamese flag, with a mixed cargo of goods and two hundred Chinese workers as passengers. They are sailing in the Formosa Strait in the South China Sea bound for Fu-chau, and the barometer is falling.

Part II. MacWhirr is a practical, undemonstrative man of few words. He prepares for what he thinks of as ‘dirty weather’. As the storm gets worse, there is discord in the engine room. Jukes the realistic first mate suggests changing course to avoid the worst of the storm, but MacWhirr stubbornly rejects all known advice in order to avoid altering course (and the cost of the extra fuel it would consume).

Part III. Jukes does his best to prepare the ship for the worst, but when the full force of the hurricane strikes the ship it is so ferocious that he thinks all is lost. He and MacWhirr cling to each other whilst they are pounded by waves and hail. MacWhirr puts his faith in the sound construction of the ship.

Part IV. The bosun arrives with the news that fighting has broken out amongst the Chinese workers below decks. The storm has smashed some wooden sea chests, and dollar coins are spilling loose. He has also discovered that some of the ship’s crew have panicked and are hiding themselves away. MacWhirr despatches Jukes to investigate, which he does reluctantly. Meanwhile, the second mate loses his nerve and panics, forcing MacWhirr s to knock him out. First engineer Rout works heroically in the engine room, from where Jukes reports to the captain.

Part V. In the engine room Jukes is convinced that the ship cannot survive the storm, and the engineer orders him out as a hindrance to his work. Jukes and the bosun take crew members into the bunker where the coolies are trying to get out. The crew subdue the coolies, then lock them in below decks. There is a lull in the hurricane, but MacWhirr realises that being a ‘revolving storm’, there will be a second part to come which could be even worse than the first. He reassures Jukes that by staying attentive, they might come through it.

Part VI. The tale ends with the ship in port at Fu-chau, having survived the second part of the storm. The principal characters are writing back home. On receiving their letters Mrs MacWhirr hopes her husband will remain at sea, and Mrs Laut and her mother similarly have no concept of her husband’s character or heroism. Jukes explains in a letter to his friend how MacWhirr solved the coolie dispute by dividing the dollars equally between them all – so as to create a minimum of trouble.