Visual Explanations is Edward Tufte’s passionate manifesto for intelligent information design. He is concerned with the need for scale, accuracy, and truthful proportion in the visualisation of data. The book derives much of its charm from the beautiful reproduction of its illustrative materials. He includes engravings, photographs, maps, computer-generated images, and even built-in flaps showing motion and before-after effects. The diversity of his examples is just as impressive. 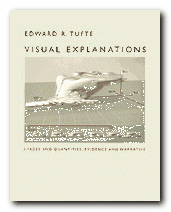 They are drawn from scientific papers, conjurors’ manuals, and even books designed to be read under water. In one stunning example, he uses video snapshots of his own two-dimensional yet dynamic visualisation of a thunderstorm. Tufte [pronounced “TUFF-tee”] makes his central argument in a chapter which has now become famous.

This discusses the mis-representation of data related to the 1986 Challenger space shuttle which resulted in a disastrous explosion and the death of all the cosmonauts on board. His dense technical analysis of data-presentation and bad practice is used to argue that the fatal accident could have been averted if charts and diagrams had been presented more intelligently, more accurately.

A chapter on conjuring tricks focuses on the clever representation of temporal progression in single illustrations from how-to-do-it books. However, it has to be said that sometimes it’s not quite clear what point he’s making, and he seems to be struggling with what is obvious: that it’s difficult to represent fluid motion in static, two-dimensional images.

Eventually it emerges that he wishes to compare magic with it’s opposite – teaching. One amazes by concealment, the other should inform by revelation. “Your audience should know beforehand what you’re going to do.” That’s a useful insight for some of us.

His attitude is enormously confident and persuasive. Yet if you can brace yourself as a reader, it sometimes seems that he doesn’t always follow his own theories in the presentation of materials – and this in a book which he wrote, designed, and published himself. On some pages, it’s difficult to link illustration to argument; some reproductions are disproportionately large for the point they are making; and he pursues the odd habit of crowding the generous page margins with bibliographic minutiae which would normally be reserved for chapter endnotes.

He writes in a cryptic, elliptical manner, and is much given to compressed generalisations and gnomic claims such as “to make verbs visible, is at the heart of information design” – though this approach can also be quite witty, as when he dismisses one of the bad examples as “better than nothing ([but] that’s all it’s better than”.

Despite these occasional oddities, there are thought-provoking ideas on almost every page. For instance, the idea that the public health warnings on US billboard cigarette advertisements are less effective because they are difficult to read, crammed as they are into boxed text, sans-serif fonts, in continuous capitals, and underlined – which makes four typographical solecisms in one.

Despite the graphic variety of his presentations, many of his arguments are amazingly orchestrated onto single or double-page spreads, and the book is an almost irresistibly beautiful production. What he’s actually talking about is visual rhetoric: “by establishing a structure of rhythm and relationships, [graphic] parallelism becomes the poetry of visual information”. We might wish to query some of his theoretical claims, but it’s very hard to be critically detached from such a seductive presentation of evidence – which paradoxically is the very point he’s warning us about.