A Problem first appeared in The Galaxy magazine in June 1868. It was not reprinted during his lifetime, and next appeared in the collection Eight Uncollected Stories of Henry James published by Rutgers University Press in 1950. 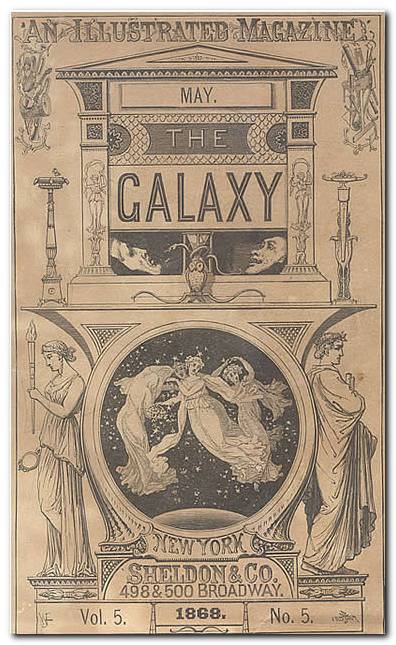 This tale is not much more than a sentimental anecdote, told in very general terms with very little attempt to provide concrete historical detail or even a realistic setting. James was only twenty-five years old and in his apprenticeship phase, writing for popular magazines such as The Galaxy. Even he seemed to be aware of the shortcomings in his work at that time:

I write little & only tales, which I think it likely I shall continue to manufacture in a hackish manner, for that which is bread. They cannot of necessity be very good; but they shall not be very bad.

The tales was illustrated in the magazine (as was quite common at that time) by a sentimental engraving by popular illustrator W. J. Hennessy. It depicts the moment Emma and David are reconciled observed by the rather vacuous clergyman, Mr Clark.

The only other point of note is the manner in which James depicts the two native American Indians in the tale. One is a rather squalid young woman, and the other is her even more negatively portrayed mother, who David believes has been drinking. When the mother addresses the daughter she “said something in her barbarous native gutterals”. It is interesting to see how James portrays native Americans, Afro-Americans, and Jews in his work: he certainly does not win any prizes for political correctness.

On the last day of her honeymoon, newlywed Emma has her fortune told by an Indian squaw. She predicts that Emma will have a child within a year – and that it will die. Emma does have a child which falls ill – but then revives.

Emma starts to become jealous, whilst David becomes more nervous and anxious. He becomes friendly with a single woman called Julia and confides in her about the prophecies. Julia thinks she will help by going to visit Emma, but Emma resents the intrusion of another woman into her affairs.

She leaves David and goes back with their child to live with her mother. Six months later David receives word that his daughter has died. When he visits the house, he and Emma are reconciled by a visiting clergyman – and are thus ‘married’ twice.