At Isella first appeared in The Galaxy Magazine for August 1871. Its first appearance in book for was as part of the collection Travelling Companions published in New York by Boni and Liveright in 1919, three years after James’s death. 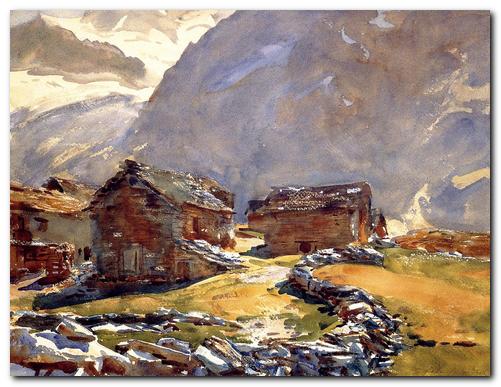 This tale is little more than a travelogue and study in landscape word-painting, coupled to an anecdote. The first part of the story is a vivid and romantic account of travelling through the Alps in southern Switzerland, towards the Italian border. The narrator emphasises the rugged grandeur of the Saint Gothard, the Furka, and the Simplon passes; and he keeps before him a romanticised view of everything lush, comfortable, and welcoming that he feels lying in wait for his arrival in Italy.

The second part of the story is his meeting with the mysterious woman going in the opposite direction for roughly similar reasons – to join someone she loves. The only element approaching a story or plot is that the reader is given every reason to believe that the narrator will turn out to be the victim of a confidence trick. The mysterious woman takes his money without offering any evidence to support her story of an irate husband being in hot pursuit to catch her. But in fact the husband turns up the next morning – so our ‘expectations’ in terms of traditional narratives are thwarted.

However, it has to be said that the effect is somewhat bathetic. There is no lesson for the narrator or anyone else to draw from the episode. The Italian inn-keeper lies to assist the woman in flight from her husband – but that is all.

An un-named narrator gives a rather critical account of Switzerland, which he is leaving to spend some time in northern Italy. He climbs the Saint Gothard Pass road, stays with clergymen in a hospice, then descends into Lombardy via the Simplon Pass.

When he reaches Isella, he meets an Italian woman travelling in the opposite direction. They dine together, and he speculates on her age and social background. She reveals that she has been unhappy in Italy. He delivers a romantic encomium to the country, then reveals that he is en route to meet his fiancée in Florence. She is running away from her husband and going to meet a friend in Geneva.

She tell him her background story – how her brother was killed, then she met and loved his best friend the artist Ernesto. But her father forced her to marry a man three years previously who turned out to be a ‘brute’. She has corresponded with Ernesto, who is now ill in Geneva.

She has run away from her husband, but does not have the money for her fare to Switzerland. The narrator gives her the money, and she departs immediately. Next day her husband turns up looking for her, but the inn-keeper denies she has been there.