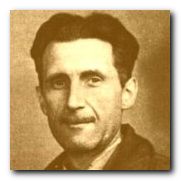 George Orwell (real name, Eric Blair) is renowned as a master of plain English prose style. He went out of his way to make himself understood to as many people as possible. He wrote in a very political era – the 1930s and 1940s. It’s hardly surprising that much of his work is written in support of democratic causes and as a warning against any form of totalitarianism, whether from the left or right. He started as a novelist of lower middle-class misery in the tradition of George Gissing, found a new strength in his reportages from working life and the Spanish Civil War, and ended his short life with two rather un-English books which have become classics of the political novel. he was not a great writer of the first rank, but a very decent man with a gift for clear expression and a desire to tell the truth and expose the fake. Martin Seymour Smith sums him up admirably by saying “he was a master of lucidity, of saying what he meant, of exposing the falsity of what he called double-think”

Down and Out in Paris and London (1933)
This is a social documentary about Orwell’s true-life (and self-imposed) experiences scraping a living and being homeless in the two capitals. Although it is fairly obvious that his plight is self-inflicted, the book contains memorable scenes of working as a plongeur in a restaurant, living alongside dossers and tramps, and queuing for an overnight bed at the Salvation Army hostel. Orwell strikes a note of unflinching realism in this his first book. Very readable, and an interesting commentary on between-the-wars experiences.

Keep the Aspidistra Flying (1936)
Orwell’s semi-autobiographical third novel – almost a modern Grub Street. Gordon Comstock is an aspiring poet who works as an advertising copy-writer. He hates his job, helping to sell mundane products. So he gives it up and works in a bookshop to support himself whilst failing to find literary success. He is in a constant state of war against what he calls the ‘Money God’ – the commercial requirements of the market place – to which he eventually succumbs. However, he does in the end achieve success of a human kind by getting married and becoming a father.

The Road to Wigan Pier (1937)
This hybrid book is a famous piece of sociological reportage. Whilst other people theorised about the working class, Orwell went to spend time with Lancashire miners in the depression of the 1930s. This is his account of how they lived and worked. It made an enormous impact at the time and still speaks with a voice of truth and authenticity about a level of griding poverty which fortunately no longer exists. Part One describes the appalling conditions in which many people lived at the time. Many people were shocked by the scenes he describes. In Part Two he expounds his personal strategy for Socialism, using an account of his own personal journey from public schoolboy and member of the Indian Imperial Police in Burma, to Left-wing author and crusading journalist. This is one of the few books to emerge from Victor Gollancz’s Left Book Club which is still worth reading.

Homage to Catalonia (1938)
This is possibly Orwell’s best book. It offers a vivid first-hand account of the Spanish civil war, in which he fought between 1936 and 1937. It includes a wonderfully upbeat sketch of Barcelona whilst it was briefly under control of the anarchists and Trotskyists. This is nevertheless the first of Orwell’s warnings about the betrayal of good causes by ideologues. All his political judgments turned out to be more or less correct in the long term, though he was criticised by both Left and Right at the time. This is the literature of commitment at its very best, and a very good example of truthfulness in political reportage. It also includes instructions on how to successfully achieve an all-over wash in a mountain stream at sub-zero temperatures.

Coming Up for Air (1939)
Written at the height of the political disappointments of the 1930s, this is possibly Orwell’s most pessimistic book. George Bowling is a middle-aged insurance clerk trapped in a loveless marriage. He tries to escape by revisiting the idyllic past of his childhood in Lower Binfield. But when he gets there, like all pasts, it has vanished. The only thing he has to look forward to in the end is the prospect of war – which when the book was published was just around the corner.

Collected Essays and Journalism
It’s possible that Orwell’s essays will outlast most of his fiction. These are perceptive and well-written meditations on politics, nationalism, language, and what we now call mass communications – newspapers, radio, and popular culture. It’s interesting to note that these essays, which at the time they were written were challenging the status quo, are now used as models of good practice by the educational establishment.

Animal Farm (1945)
This is a rare case of a modern fable that works convincingly. It’s Orwell’s satirical allegory of the betrayal of the Russian revolution – transposed to struggles between the animals and humans on Manor Farm. Th revolution is a success, but is then betrayed by corruption and factional in-fighting amongst the animals themselves – with political slogans such as the now famous ‘All animals are equal, but some animals are more equal than others’.

Nineteen Eighty-Four (1949)
Orwell’s best-known work. The title alone has passed into common use as a term for a totalitarian dystopia. Ordinary citizen Winston Smith battles to maintain the values of rational humanism against the fascist state which is under the control of Big Brother. This is a society where people are made to conform to orthodoxy by the Thought Police. He is helped by his love for Julia, a fellow humanist, but eventually, under torture in Room 101, he betrays her. Orwell was much influenced by Yevgeny Zamyatin’s novel We, which he reviewed in the 1930s.

George Orwell: Essays
This is an anthology which includes George Orwell’s most famous pieces, among them My Country Right or Left, The Decline of the English Murder and How the Poor Die. With insight and wit, Orwell writes on a series of wide ranging topics, from the Spanish Civil War to a defence of English cooking. Some of his generalisations about ‘English character’ might now strike us as a little jingoistic, but on the whole these essays are models of combative thinking and good prose.

George Orwell: A Life This is the more-or-less standard biography, which was written in 1980 and has since revised twice. Bernard Crick puts his emphasis on Orwell’s politics. There are other more recent biographies, but Crick’s will help you to understand the social and ideological background to the turbulent period through which Orwell lived and wrote. It’s particularly good for understanding the strained allegiances amongst socialists and liberals caused by the Stalinist betrayal of the revolution.

1903. George Orwell born as Eric Arthur Blair in Mothari, Bengal. His father was an English government official in the Opium department.

1904. Blair moves with mother, Ida Mabel Limouzin and older sister, to Henley-on-Thames, Oxfordshire, to be educated in England, according to Anglo-Indian tradition.

1922. Joins the Indian Imperial Police and serves as an officer in Burma.

1927. Resigns from Indian Police and returns to England.

1929. Money runs out – returns to England and becomes a tramp.

1932. Secures a job teaching in a private school.

1933. Publishes Down and Out in Paris and London using the pseudonym George Orwell.

1934. Works in a bookshop in London. Publishes his first novel – Burmese Days.

1936. Visits the north of England, researching working conditions amongst miners. Marries Eileen O’Shaughnessy. Publishes Keep the Aspidistra Flying Goes to Spain and joins the POUM to fight in the Spanish Civil War.

1937. Shot through the neck and returned to England. Publishes The Road to Wigan Pier.

1940. Publishes Inside the Whale

1941. Joins the BBC as a talks producer and broadcaster for India. Publishes The Lion and the Unicorn. Writes reviews for Time and Tide, Tribune, The Observer, Partisan Review, and Manchester Evening News,

1943. Resigns from the BBC and becomes literary editor of Tribune.

1944. Completes Animal Farm, but no publisher will accept it. He and Eileen adopt baby boy, Richard.

1946. Leaves London to live with son and nurse on the island of Jura.

1950. Dies of tuberculosis and is buried in Sutton Courtenay, Oxfordshire. Shooting an Elephant and Other Essays.

George Orwell: A Life is the more-or-less standard biography, written in 1980 and revised twice since then. Bernard Crick puts his emphasis on Orwell’s politics. There are other more recent biographies, but Crick’s will help you to understand the social and ideological background to the turbulent period through which Orwell lived and wrote. It’s particularly good for understanding the strained allegiances amongst socialists and liberals caused by the Stalinist betrayal.