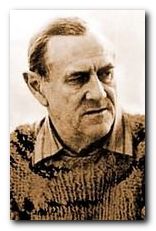 Patrick White was born in Australia but sent to be educated in England, which he disliked intensely. He settled to live in London during the 1930s and served in the RAF during the war. After the war he returned to live in Australia, eking out his small private income by farming. His novels offer great variety in their themes, subjects, and settings – but what they have in common is his use of powerfully rich language, his deeply psychological character portraits, the dramatic incidents of his stories, and a semi-mystical belief system which he invites us to contemplate without making his narratives depend upon it. He was awarded the Nobel Prize for Literature in 1973.

The Tree of Man (1955)
This is White’s first major work. (He actually dis-owned some of his earlier work.) It is an epic account of a young farmer, Stan Parker and his wife Amy and their struggles to build themselves a life and a family in the middle of the Australian wilderness at the beginning of the twentieth century. The life they make is full of small triumphs and some bitter disappointments. This is a novel which has been compared with D.H. Lawrence’s The Rainbow, yet the tale is recounted in a bare simple prose which gives no hints of the baroque complexities of his later style.

A Fringe of Leaves (1976)
This novel is the re-telling of a true nineteenth century incident which has become a mythical Australian narrative. It’s the story of Mrs Fraser, an English woman who is shipwrecked on the island which now bears her name. She gets back to the mainland, only to be seized and held semi-captive by Aboriginal natives. She escapes from them and teams up with an escaped convict to make an epic journey on foot back to ‘civilization’. The implication of the novel is that she is spiritually transformed by her experiences of suffering and deprivation. It conjures up a very romantic evocation of the period, with all White’s touches of vivid and dramatic scene painting.

Voss (1957)
This is another nineteenth century epic tale – this one based on the true story of the tragic and doomed journey made in 1845 by the German explorer Leichardt. He leads a group across the Australian desert, and is accompanied imaginatively by a young woman, Lara Trevalyen from her home in Sydney. She suffers with him, right up to the point of his death – and then keeps his memory alive. The scene painting of the Australian outback and desert is truly wonderful, and although an outsider, Voss lives on as an increasingly legendary, martyred figure. This is another of White’s novels which seeks to capture the essence of Australia, its national spirit, and cultural heritage.

The Vivisector (1970)
This is the story of Hurtle Duffield, an Australian painter – a portrait loosely based on Sydney Nolan, with whom White was once friendly before they fell out because of a fairly trivial disagreement. It traces very convincingly the relationship between the artist’s experiences of life and their translation into artistic expression. What makes this novel particularly interesting is its dramatic conclusion as Duffield sinks into a psychologically chaotic old age. His memories from a past which we have fictionally shared are woven into his crumbling grip on the present. The fragmented narrative is demanding on the reader, but very impressively written, as we are invited to remember the origins of sane incidents which lie beneath his apparently deluded old age.

The Twyborn Affair (1979)
This novel; presents readers with a real challenge. It’s White’s version of Virginia Woolf’s Orlando. Without giving away too much of the very intriguing story line, White is exploring the relationship between gender and sexuality. The same character experiences life in quite different ways with different sexual identities. The setting changes from the south of France, to an Australian sheep farm, then back to a brothel in London. It’s baffling and uncompromising at first reading – but eventually makes a kind of sense.

Riders in the Chariot (1961)
Many critics see this as White’s greatest work. The story puts together four completely different characters – all outsiders in one way or another. It’s not difficult to see them as various aspects of White’s own complex personality. Himmelfarb is a refugee Jewish professor struggling to come to terms with his persecution and the murder of his wife by the Nazis. The other misfits are a half-caste painter, a spinster, and a washerwoman, Ruth Godbold, who finds a mystic feeling of togetherness with her living friends and the dead ones. It contains White’s most ferocious criticism of Australian gentility and ugliness, plus the subtle gradations of racism, ignorance, and hypocrisy in contemporary suburban society.

Faws in the Glass (1981) is an amazingly frank self-portrait. In this he reveals the truths about his homosexuality; his feelings of inhabiting different personae and sexual identities; his lifelong feud with his mother; his alcoholism, and his later political radicalism. Reading it will certainly help you to understand his complex fictions, but more importantly it lays bare his relationship with Australia. White reveals a great deal about the psychological processes through which his experiences and ideas are transformed into art. It is a fascinating if at times almost uncomfortable reading experience.

1912. Patrick White born in Sydney – his father was a wealthy sheep farmer. Both parents were indolent, snobbish, and never worked. White always felt very distant from them.

He was sent to England to be educated at a boarding school in Cheltenham College. He hated it, and reproached his parents:

“I resented their capacity for boring me and their dumping me in a prison of a school at the other side of the world.”

He spent adolescent holidays in Dieppe and Germany, and read mainly poetry as a youth, then went on to take a degree in French and German literature at Cambridge University.

1930s. His father finally made him an allowance of £400 per year, and he settled in bohemian London, making friends with the painters Francis Bacon and Roy de Maistre. He made a break with Australia which was part cultural, and partly to do with his struggle with sexual identity:

“I see myself not so much a homosexual as a mind possessed by the spirit of a man and woman according to actual situations or the characters I become in my writing.”

1939. Published his first novel, Happy Valley, which he later disowned. He emigrated to the USA, but returned on the outbreak of war to join the RAF. He served in the middle East in the Intelligence Corps, working as a censor.

“Superficially my war was a comfortable exercise in futility carried out in a grand hotel amongst the bridge players and swillers of easy-come-by whisky. My chest got me out of active service and into guilt, as I wrote two, or is it three of the novels for which I am now acclaimed.”

1941. Published his second novel, The Living and the Dead, about which he later said “Perhaps it should not have been written”.

1945. He settled back in Australia with his Greek partner Monoly Lascaris, and they attempted a form of self-sufficiency on a smallholding, making a living from selling flowers, vegetables, milk, and cream.

1948. Published The Aunt’s Story and traveled widely throughout England, France, Germany, Egypt, Palestine, and Greece, as well as Australia and the USA. His spiritual life is particularly tempestuous.

“Those who are doomed to become artists are seldom blessed with equanimity. They are tossed to drunken heights, only to be brought down into a sludge of headachy despair.”

1955. Published The Tree of Man – a family saga, which focused on ordinary people at the beginning of the twentieth century. Stan Parker is a young farmer. He establishes a family and farm in the Australian wilderness, has children and grandchildren, but the land is eventually engulfed by suburb.

1957. Published Voss “Much of Voss was written in bed”

1961. Published Riders in the Chariot.

Flaws in the Glass (1981) is an amazingly frank self-portrait. In this he reveals the truths about his homosexuality; his feelings of inhabiting different personae and sexual identities; his lifelong feud with his mother; his alcoholism, and his later political radicalism. Reading it will certainly help you to understand his complex fictions, but more importantly it lays bare his relationship with Australia. White reveals a great deal about the psychological processes through which his experiences and ideas are transformed into art. It is a fascinating if at times almost uncomfortable reading experience.

1973. Published The Eye of the Storm. Awarded the Nobel Prize for Literature – but White, who guarded his privacy, did not attend the award ceremonies. He persuaded his friend, the artist Sidney Nolan, to accept it in Stockholm on his behalf.

1976. Published A Fringe of Leaves

“I first went to Fraser Island after Sydney Nolan gave me the story of Eliza Fraser and the wreck of the Stirling Castle. I went there on my own and began A Fringe of Leaves but gave up on deciding that Australian writers should deal with the twentieth century. Years later Manoly and I went to the island together and explored it more thoroughly. From two visits and a certain amount of necessary research, it became part of my life, and the novel I wrote as painful and sensual a situation as one I might have lived through personally whether as Ellen Roxburgh or Jack Chance.”

1981. Published Flaws in the Glass

1986 Published Memoirs of Many in One