1. A word-processor is one of many applications which can run on your computer, alongside programs for spreadsheets, databases, or graphic design. For many people however, a word-processor and a computer are almost one and the same thing. This is why their names are often used interchangeably. The reason for mentioning this is to remind you that all these applications are doing basically the same thing – taking the data you put into the computer and converting it to electronic signals. The processor then manipulates these signals to present the data in a new form. In the case of a word-processor, your instructions are put in at the keyboard, and they appear on the screen as letters and words. Within your computer however, they are just a series of numbers. 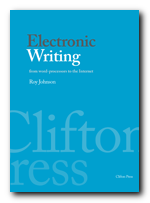 2. What we’re going to do in this chapter is discuss the basic functions of word-processors, and look at what they can do to help us write. We’ll examine some of the most useful items from those drop-down menus and their keystroke equivalents. These are the basic tools we all use in generating and manipulating text. We’ll start with the simplest features of most programs and leave the tricky stuff until later. But first a few words about word-processing programs in general.

3. There are many word-processing packages on the market – from the old Amstrad favourite, LocoScript, to the more sophisticated XyWrite sometimes used by journalists. However, those with the greatest number of current users are WordPerfect, Microsoft Word, and AmiPro. All these programs are very similar, especially in their Windows versions, and they are becoming more like each other as a result of competition and the race for market domination by their manufacturers.

4. If you are still using one of the older word-processors or an early version that doesn’t have all the latest bells and whistles, you might feel slightly frustrated by mention of glamorous features on the latest release. But take heart! Even the simplest word-processor [Notepad in Windows, for instance] will offer very powerful tools to assist your writing, and there are other reasons why the latest is not necessarily the best.

5. First, you should not assume that just because the latest release has more features, it will automatically be superior to earlier versions. It may offer lots of whiz-bang novelties, but there is often a price to be paid. For instance, the latest version will almost certainly take up more hard disk space. In addition, the first releases of new programs sometimes have bugs which take a while to fix. [When WordPerfect 6.0 for Windows was first released, the program crashed so often, many people migrated to Microsoft Word.] Nathan Myhrvold, the chief technologist at Microsoft, admits that “people always want the new [version]. But I wouldn’t want them to operate a plane I was on with software that happened to be the latest greatest release!”

6. The second point to make is that many experienced writers actually prefer the older programs because they are simpler, and they may work faster, specially on newer machines. As information technology guru Nicholas Negroponte admits “I still run Microsoft Word 4.0 (and would run Word 2.0 if I could) because it’s fast and simple”. This is a good point. Speaking from my own experience, when producing plain text with no trimmings, I often use Windows Notepad for the same reasons.

7. The earliest word-processors just performed the basic functions of manipulating text. More recently, the addition of page layout and graphics facilities have changed all this. Users now expect ready-made style sheets, font-manipulation, and one-click boxes and icons. The result is that modern word-processors are now a combination of text-processors and page-layout packages. Manufacturers copy each other’s ideas, and most packages are now beginning to look the same. This is something that we can turn to our benefit in this chapter, for we’ll be able to look at features which are common to them all.

8. Just in case you are not already convinced or well disposed to the idea, the advantages of using word-processors for writing are simply enormous. It’s possible that someone with talent and imagination could write a masterpiece with a pencil on the back of an envelope. For the majority of us lesser mortals however, word-processors offer the chance to generate and revise text in ways which were inconceivable before their invention. As a survey of professional writers has shown, the majority of them consider that the use of word-processors ” makes writing more of a pleasure, saves time and increases output” [Authors and Information Technology, The British Library, 1991].

9. If you are completely new to word-processors, you may be worried about some of the problems which confront the inexperienced user. You are likely to be anxious about losing work, in fear of system crashes, and disoriented at the screen. These are all very common features of this early stage in the learning process. We’ll consider some of these problems in a moment, but I have put them at the end of this chapter so that we can start on a more positive note. However, if you are in urgent need of help, there would be nothing wrong with reading this last section now. Don’t feel bad if there are aspects of using a computer which at first seem to turn your brain inside-out. Lots of other people have felt the same.

10. It’s also worth saying that some of the simplest functions of a word-processor can seem very baffling if you have no previous experience. Learning all the commands and functions requires conceptual skills which are likely to be new to most people. So, if you are a beginner, don’t let anybody make you feel guilty about needing to learn. We’ve all been there at one time. The items which follow are the basic functions of a word-processor. We will deliberately not cover them all. First, because it is the very profusion of different commands and menu items which can seem confusing, and second because covering them all would take too long. This book seeks to concentrate on those functions which are used for writing – not graphics or spreadsheets for instance. We’ll begin with the tools for producing, saving and managing text. The more sophisticated functions of editing will be discussed in the next chapter.

1. When you first use a word-processor you will be itching to print out your work as soon as possible. The last thing you want to do is sit down to learn about menus or keystroke commands. Nevertheless, you will develop your skills and work more efficiently if you take the trouble to explore the basics. This might mean working through the tutorials which are included in many of the latest word-processing packages. Try to be thorough about this – but don’t try learning too many commands all at once. If you have an older program which doesn’t have a built-in tutorial, read the manual or buy one (which should be reasonably cheap second-hand).

2. It might help if you attend an introductory course which teaches you the basics. These have one distinct advantage over learning alone. If you teach yourself, you may not cover all the possibilities which a word-processor has to offer, because it’s not easy knowing what these might be. Many people learn a few simple commands but then never pass beyond this point. There’s nothing wrong with that if all they need is a substitute for a typewriter, but a word-processor has a great deal more to offer – as we shall see.

3. After you’ve learned how to switch on the machine, the most basic elements are the commands you activate to work the word-processor. With very few exceptions, you will have a choice of pull-down menus activated by a mouse, and the same choices which can be made by a set of keyboard commands. That is, you can either click on a menu item to select it, or press a couple of keys to perform the same actions. The method you choose will depend on personal preference, your typing speed, or the complexity of the task in hand.

4. The distinct advantage of pull-down menus is that you do not have to remember keystroke combinations. You just point and click. This has made menu-driven word-processors very popular, and the addition of icons makes this process of selecting commands even easier. However, fast typists may not want the bother of switching between keyboard and mouse. They often prefer to use keystrokes.