Anybody involved in a creative project – particularly where a number of people are involved – knows that an early question will always be raised: “Who owns the intellectual property rights?” Or you could be selling widgets, only to find that another company has started doing the same thing. Can you sue them – or are they more likely to sue you? The product can be a manufactured object, it could be a service, or an ‘intellectual asset’. It could be designing a company web site, running a training course, writing a product guidance manual, devising a manufacturing process, or putting on a television programme. 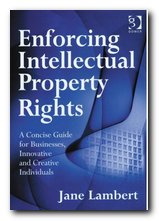 History is littered with cases of people who assumed that they had the rights to something they had written or produced – only to find the profits from their labours taken by somebody else. This book is a straightforward guide to all the information and legal advice you will need to guard your rights to intellectual property. It’s written by a practising barrister who specialises in giving advice to individuals and small businesses. Jane Lambert is obviously committed to helping people in the creative industries, and this is even reflected in the fact that she takes the trouble to write a book on legal matters in a style which is readily understandable – and quite entertaining.

She starts with two useful glossaries of intellectual property terms – moral rights, passing off, intellectual assets, and the differences between copyright and patent. These are followed by quite an engaging scenario in which someone seeks legal advice on the copyright to household decorations which are being made in China and imported.

The explanations being given illustrate how an apparently simple case is fraught with all sorts of legal complexities. It’s amazing to learn how different laws and conventions apply to different types of product. Copyright for imaginative fiction is seventy years after the author’s death for instance, whereas for industrial design it’s twenty-five years, and a patent only lasts for twenty.

Jane Lambert is a big fan of the Internet, and full web addresses are given for all her sources of information. She explains the common cases of protecting brands and domain names, as well as trademark infringement – against which the UK legal system offers quite strong protection. However, it’s important to realise that the law may differ in countries outside Europe and the USA, and that in some places copying somebody else’s work may not be regarded as illegal.

Having explained the rights in IPR, she then goes on to cover the resolution of disputes which arise in the courts over issues of ownership. And even though she earns her living in a practise which specialises in such cases, she warns against using the system unless it is absolutely necessary – both because it is so expensive and because disputes can often be resolved outside it. She also explains how the whole system of civil procedures was reformed ten years ago (by Lord Chief Justice Woolf).

But if you really do want to prosecute a case she explains the procedure – which usually begins with a ‘cease and desist’ letter. It should not begin with any form of threats or bullying – because such actions can themselves result in prosecution.

The legal system now requires both claimant and defendant to show that they have done everything to seek resolution and not made matters worse. In the event that agreement cannot be reached, there are a number of forms of arbitration and adjudication which can be followed.

And if all else fails, and you end up in a court of law, she explains how court cases are conducted, who decides what, and how the best cases can be made. As she explains as an aside, many people falsely believe that the success of a case depends up some form of brilliant court room oratory (as in movies). But the truth is more prosaic: it depends largely upon a well-researched and carefully prepared case – which costs time, money, and skill.

But in the event that you might need them, she also offers some templates for standard letters used in making claims and defences – as well as tips on preparing your strongest case. This is a sane, humane, and very readable account of a very complex set of issues. Anyone contemplating an entry into this arena would do very well to prepare themselves by taking her advice.