the romance, the double, the psyche

Immediately the Monster has been created, Frankenstein falls into a guilt-induced dream which wonderfully combines all his sexual anxieties – conscious and unconscious:

I saw Elizabeth in the bloom of health … I embraced her: but as I imprinted the first kiss on her lips, they became livid with the hue of death: her features appeared to change, and I thought that I held the corpse of my dead mother in my arms.

Here we have his desire for Elizabeth, his vision of her as a source of disease, the association of disease and death with sexuality, his notion of Elizabeth as his mother’s killer, and the Oedipal desire for his mother herself – all in one brief tableau.

The dream is so disturbing that Frankenstein awakes – and is described in almost exactly the same terms as the Monster – ‘a cold dew covered my forehead … and every limb became convulsed’ – whereupon the Monster appears to him – ‘He held up the curtain of the bed … and his eyes were fixed on me’ which is another stunning image of the Monster as Frankenstein’s sexual guilt. One notes that it is then Frankenstein who runs away from the Monster – that is, releases it to perform his unconscious wishes. Frankenstein himself falls ill, and is nursed back to health, back to social normality by his ‘conscience’, his Super-Ego figure, Clerval.

The id-Monster is now at liberty as an amoral force, but with explicitly sexual impulses. Since he is ugly (which is Frankenstein’s notion of sexuality) and knows he will never be loved by a woman, it is a mate he requires of Frankenstein: ‘I demand a creature of another sex, but as hideous as myself’. He also knows that if this ‘passion’ is not gratified it will turn from a desire for ‘the interchange of … sympathies’ into a wanton destructiveness. That is, the unconscious libidinous impulses of Frankenstein’s he represents will, if not properly gratified, turn from positive creative ones into something negative and destructive.

Following his illness, Frankenstein receives a letter from Elizabeth telling him that his father’s health is still ‘vigorous’ that another daughter-figure (Justine) has been adopted by the family, and that William is ‘tall of his age, with sweet laughing blue eyes’ ans ‘already one or two little wives‘ [her emphasis]. As if that wasn’t enough, she concludes with a list of local marriages as a hint to Frankenstein. The communication is almost a catalogue of his worst psychological fears.

There follows the murder of William – the removal of Frankenstein’s sibling rival, and the accusation of Justine who is convicted on the evidence of possessing a portrait of Frankenstein’s mother. Here is an interesting case of psychological transference. Frankenstein would ideally remove Elizabeth, but the similarly adopted daughter is substituted. Justine is killed in the same way that Elizabeth will be (by strangulation) and Frankenstein is responsible for her death: he leaves the court in a hurry when he might have revealed who the true killer was – his own Id.

The battle between Frankenstein’s Ego and Id then moves into its next phase. The Id has been released: it even justifies the nature of its claim during the interview on the Mer de Glace. Frankenstein at first agrees to create a female Monster, but before he can do so he has to fight against further counsel from the Super-Ego. His father suggests that he should waste no more time and marry Elizabeth. Frankenstein’s reaction is telling: ‘to me the idea of an immediate union with my Elizabeth was one of horror and dismay’. He takes flight from this threat by travel abroad – knowing that marriage awaits immediately on return. Another representative of his Super-Ego (Clerval) travels with him – ‘how great was the contrast between us’ – but is shaken off (despite his entreaties) in Scotland – so that Frankenstein can again do his work in secret.

The psychological battle within Frankenstein now rises to its peak. Freud summarises the process in these terms:

we see this same ego as a poor creature owing service to three masters and consequently menaced by three dangers: from the external world, from the libido of the id, and from the severity of the super-ego’

He knows that he is doing wrong in performing further experiments, and he also fears the consequences – for sexual reasons: ‘one of the first results of those sympathies for which the daemon thirsted would be children’. It is easy to see how Frankenstein (himself afraid of sexuality and procreation) feels threatened by the creative potential of the id-Monster.

He refuses to create a mate for the Monster, who then turns his libidinous energy into a negative direction. And even this is expressed in directly sexual terms: ‘I shall be with you on your wedding night’. This will undoubtedly be the climax of their struggle in more senses than one.

The Id is now gaining ascendency over the Ego, but before its power can become effective the Super-Ego’s hold must be weakened. Clerval, as its closest representative, is murdered, after which Frankenstein falls into another two month swoon, exhausted by the psychic conflict taking place within himself. During the swoon he raves ‘I called myself the murderer of William, of Justine, and of Clerval’. One notes how well the Double and the Freudian interpretation of the narrative dovetail at this point. 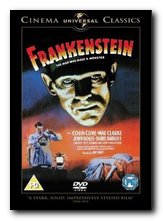 Following Frankenstein’s rescue by his father (a late rallying of the Super-Ego) he can put off his marriage no longer: ‘My father … talked of … Elizabeth … but these words only drew deep groans from me’. But his Ego cannot face the sexual consequence of the marriage: the Id takes his place instead, but having now become a permanently negative force the result is that combination of sexuality and death which the Id represents. The Ego politely leaves the bed chamber to let the Id do its work, the outcome of which is represented in unmistakably sexual terms:

she was there, lifeless and inanimate, thrown across the bed, her head hanging down, and her pale and distorted features half covered by her hair.

Only now that she is dead is Frankenstein able to embrace her ‘with ardour’ – just as he embraced his dead mother in the dream – before seeing the Monster grinning and pointing at the corpse. The scene as an image of Frankenstein’s fear of sexuality is quite clear. And the Id is now triumphing over the Ego. As Freud puts it:

Eros and the death instinct struggle within [the id] … It would be possible to picture the id as under the domination of the mute but powerful death instinct, which desire to be at peace and (prompted by the pleasure principle) to put Eros, the mischief-maker, to rest.

The battle appears to be over, but there is one further stage to go. The forces of the Super-Ego have their representative on hand. Immediately after recovering from his second swoon of the night, Frankenstein invokes the murder of his father, who ‘might even now be writhing under [the Monster’s] grasp. That is, the Super-Ego’s last hold must be shaken off. And it is: Adolphe Frankenstein dies on the next page – in his son’s arms.

The Id has finally triumphed. The amoral forces which contain that element of sexual desire which Frankenstein fears have been thwarted in finding their natural outlet and have simply become destructive. Detached completely, and freed from the possibly compensating influence of the Super-Ego, they go on to destroy the Ego itself. Frankenstein is lured into the mad pursuit across the northern wastes and ends up dead, leaving the Id-Monster to continue on his own journey in the same direction of utter negation:

I shall ascend my funeral pile triumphantly, and exult in the agony of the torturing flames.

In both the Double and the Freudian readings of the novel, it is the Monster who triumphs in the end. The force of evil in Frankenstein overcomes the force of good; the irrational impulses of the unconscious trample over conscious desire and social conditioning. Seen in this sense, the novel is a cautionary tale, recommending that these anarchic and irresponsible forces should be recognised within the individual. After all, if they are not recognised they will be left free (as the Monster is) to do whatever evil they wish. Frankenstein’s tragedy is that his sexual fears and guilt, and his unconsciously evil impulses are repressed – that is, transferred onto the Monster – when he ought to have recognised them in himself. Karl Mannheim has argued that the romantic tried to rescue ‘repressed irrational forces [and] espoused their cause’ (8) – and in the light of similar tales written (Poe’s, Dostoyevski’s, and Stevenson’s heroes too are all overthrown by their psychological doubles) there seems no good reason why a psycho-analytic reading which claims Frankenstein as an expression of conflict within the individual psyche should not be added to the long list of possible readings. The only mystery remaining, at which we might marvel, is how this wonderful tale came to be written by a young woman barely out of her teens.

Buy Frankenstein at Amazon US

1. Mary Shelley’s own introduction to the novel. Oxford University Press edition (2011) which reprints the 1831 text. All subsequent quotations are from this edition.

4. Kiely gives an account of this reading, combining it with the Frankenstein/Shelly as Prometheus reading.

Christopher Small, Ariel Like a Harpy, London: Gollancz, 1972, which also covers exhaustively the biographical readings of the novel.

7. Sigmund Freud, The Ego and the Id, London: Hogarth Press, 1962. All subsequent quotations are from this edition.

8. Cited in David Punter, The Literature of Terror, London: Longman, 1980.