Gabrielle de Bergerac first appeared in The Atlantic Monthly over three issues, between July and September 1869. Its next appearance in book form was when published by Boni and Liveright in New York, 1919. 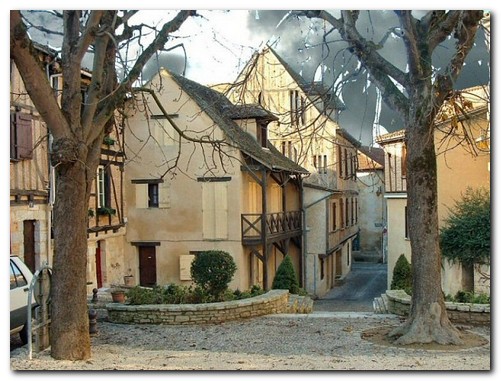 This is a story from the early part of James’s oeuvre as a writer of stories – or ‘tales’ as he preferred to call them. It is serious, well orchestrated, and deals with some serious political issues as part of its narrative. But it is a story clearly not composed from any elements of personal experience, so much as reading and the world of the active imagination. It has a distinctly Balzacian flavour beneath the rather more romantic story of a vulnerable young woman under siege from an unwanted suitor

It is also, rather unusually for James, set roughly a century prior to its composition, and contains many elements of political and social history. The most striking element of course is the materialist and almost Marxist interpretation of the ruined chateau at Fossy given by Coquelin. He is aware of its former splendour, but realises the social cost at which it has been built and maintained – on the labours of people of the lower classes to which he belongs.

It is his passionate articulation of these beliefs that wins over Gabrielle to admire him so much – even though on the occasion of their visit she presents a different, more romantic interpretation. But she has the honesty to later reveal that she didn’t really believe the case she was making.

And if the story has certain romantic elements – the poor but brave hero; the scheming villain; the vulnerable motherless heroine; the dramatic confrontation in Coquelin’s room – it certainly doesn’t have a romantic outcome. The hero and heroine do eventually marry, but they lose their children in straightened social circumstances in Paris, and are then both executed as Girondistes as part of the revolution.

Gabrielle de Bergerac – read the text of the story on line

Part I.   The outer narrator receives a painting in lieu of a debt from Baron de Bergerac. It is a portrait of his aunt, who was executed during the French revolution. The Baron recounts his family history, mainly from the point of view of his childhood – which forms the remainder of the narrative.

When he is a child (‘the Chevalier’) the Baron’s father appoints Pierre Coquelin as his tutor. Coquelin is a poor would-be writer who has fought in the French colonies in America and been wounded. He is a follower of Rousseau, and teaches the boy Greek and Roman classics.

The father also has a scheme to marry a somewhat dissolute family friend Viscount Gaston de Treuil to his sister Gabrielle, because neither of them have any money, and it will save the expense of her becoming a spinster, financially dependent on the family. Gabrielle has lived a very sheltered life, but she is attracted to Coquelin who is younger and more romantic than the Viscount.

She is told that the Viscount is waiting to inherit money from an elderly relative before he proposes marriage to her, but he does propose before leaving to curry favour with the relative. The offer of marriage is expressed in a patronising manner, full of self-aggrandisement. Her response is noncommittal. He promises to return in three months with more money. Afterwards they visit Coquelin in his cottage where he shows them some sketches, including a portrait of Gabrielle. She agrees to ‘wait’ for three months before deciding on the Viscount’s offer.

Part II.   The summer period is a countryside idyll for the boy and his tutorOne day they come across Gabrielle and her friend in the house of a dying peasant. The boy realises that Coquelin is in love with his aunt. The tree of them visit a ruined chateau in the region. Coquelin takes a materialist and class-conscious view of its history, whereas Gabrielle argues for a romantic view of its past glories. Then Coquelin climbs to the highest point of the building (at great personal risk) and has difficulty getting down again.

Part III.   Back home, the boy imitates his tutor’s daring, and ends up falling in a river. He becomes ill, and whilst recovering overhears his aunt Gabrielle and Coquelin talk about their love for each other. The relationship is made problematic by their differences in social class. It becomes apparent that she has been deeply moved by his class critique of the ruined chateau, and didn’t really believe in her own argument. Coquelin knows that she is supposed to be ‘waiting’ for the Viscount’s return – though she says she will never marry him. In fact she feels that she cannot marry anyone – so Coquelin decides to leave.

The Viscount arrives, having inherited from his now-deceased relative. But Gabrielle refuses his offer – much to her brother’s anger. The Baron and the Viscount get the story of what has happened out of the young boy, who immediately tells his aunt. They go to the cottage where Coquelin is preparing to leave. The Baron and the Viscount arrive, and there is a violent show down, during which the Viscount attacks Gabrielle with his sword. She immediately reverses her decision of renunciation and announces that she will leave with Coquelin.

The aftermath of the story is that Gabrielle and Coquelin were married, had children (who died) and lived off his painting and writing in Paris. But during the revolution, they were both executed as Girondists