Glasses was first published in the Atlantic Monthly in 1896. Henry James records in his Notebooks “A little idea occurred to me the other day for a little tale that Maupassant would have called Les Lunettes though I’m afraid The Spectacles won’t do”. The story does have the sort of ironic twist that Maupassant featured in some of his own stories – of which James was a great admirer. It features the ever-present un-named first person narrator through whom the events of the story are presented. 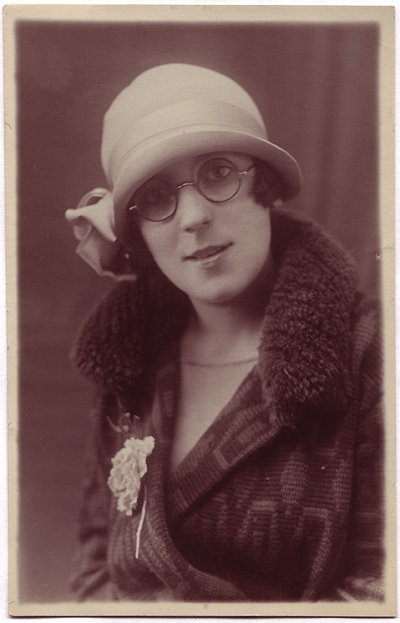 The principal theme of the story is signaled throughout by images of sight, seeing, looking, and appearance. The narrator’s occupation is looking at people and representing them in paintings. It is Flora Saunt’s eyes to which he is first attracted and which give him the inspiration to paint her portrait

However, we learn that these eyes are also her point of weakness, and she feels socially threatened by the prospect of wearing glasses.

Mrs Meldrum is a fairly conventional figure of fun because of the odd juxtaposition of her manner and her appearance.- ‘the heartiest, the keenest, the ugliest of women’ with ‘the tread of a grenadier and the voice of an angel’. She has

a big red face indescribably out of a drawing, from which she glared at you through gold-rimmed aids to vision, optic circles of such diameter and so frequently displaced that some one had spoken of her as flattering her nose against the glass of her spectacles.

This comic vision is rammed home countless times throughout the narrative, with her spectacles referred to variously as ‘nippers’, ‘pince nez, and ‘great goggles’.

Geoffrey Dawling on the other hand is physically unattractive: ‘a long, lean confused, confusing young man, with a bad complexion and large protrusive teeth’ – but the narrator feels that he is a gentleman because he is reassured by his ‘good green eyes’.

Dawling has fallen in love with Flora without even having met her – after seeing her portrait in the exhibition. It is significant that Flora at first rejects his attentions out of hand as unthinkable, but she later blossoms as his wife – but only when she can no longer see him.

During the course of the story people repeatedly stare at each other – through spectacles, a telescope, and opera glasses. And emotional scenes invariably bring tears to somebody’s eyes.

It is interesting to note how Flora’s fate is closely tied to her physical appearance and her income. She is an orphan, living in straightened circumstances, but has one advantage – her good looks. She knows that she must use those looks to attract a husband, because she is aware that she does not have a good figure. She also realises that if she were to wear glasses, this would reduce her chances of capturing a suitable husband.

And the conventions of society on this issue support her, for when she reveals her ocular weakness (as James might put it) to her fiancé Lord Iffield, he breaks off the engagement. Two interesting developments flow from that.

An engagement at that time could not be broken off lightly, without causing damage to social ‘reputation’ – particularly that of the woman. Iffield transfers the blame for the rupture onto Flora, so that he cannot be accused of ‘breach of contract’ – but offers her money as compensation. It is not made clear if she accepts it or not.

Contemporary readers might find it mildly amusing that so much fuss is made about the issue of having to wear glasses – though Flora’s eyesight is very seriously affected, to the extent that she eventually becomes blind.

What they will not fail to notice however, is a sudden flash of corrosive and wholly gratuitous anti-semitism on James’s part when the narrator arrives in Folkestone to visit his mother.

The place was full of lodgings, and the lodgings were at that season full of people, people who had nothing to do but stare at one another on the great flat down. There were thousands of little chairs and almost as many little Jews; and there was music in an open rotunda, over which the little Jews wagged their big noses.

This sort of thing takes some explaining away, even with allowance made for some ‘historical context’ – the more so since it is not an isolated instance in James’s work. There are many cases of Jews making a fleeting appearance in his fiction, and almost all are cast as negative stereotypes.

The narrator is on holiday in Folkstone to visit his mother. In the company of a family friend Mrs Meldrum (who wears glasses) he meets Flora Saunt.

Flora is an attractive orphan eking out a small inheritance, living in the shadow of people who are taking advantage of her. She is full of self-confidence and is surrounded by admirers.

The narrator introduces his mother to Flora and proposes to paint her portrait. He asks her about a problem she is rumoured to have with her eyes. Flora protests that there is nothing whatever wrong with her. Her upper class admirers then snub the narrator’s mother.

Flora’s admirer Lord Iffield buys her portrait when it is exhibited at the Royal Academy, then Geoffrey Dawling arrives at the narrator’s studio to purchase the preliminary sketches, merely on the strength of having seen the portrait.

Dawling becomes deeply enamoured of Flora, and refuses to take the narrator’s critical advice about her. Flora accuses the narrator of trying to put pressure on her to marry Dawling.

The narrator sees Flora whilst he is out shopping, but is puzzled that she doesn’t see him. He discovers her secretly wearing glasses to inspect a toy.

The narrator discusses this revelation with Dawling, who wishes to check the source of the narrator’s suspicions – Mrs Meldrum. Dawling reports back from Folkstone that Flora has a horror of looking like Mrs Meldrum, but that he will continue to pursue her.

Flora reveals the desperation of her plight to the narrator. She feels that she must marry before revealing her eye problem – because her face is her one good feature, since she ‘no figure’. When it is announced that Flora has become engaged to Lord Iffield, Mrs Meldrum tries to protect Dawling from the shock.

Dawling goes abroad and the narrator goes to America for a year. When he returns he meets Flora in Folkstone. She is a shadow of her former self, and is living with Mrs Meldrum.

Mrs Meldrum reveals to the narrator that Flora confessed her condition to Lord Iffield, who then backed out of their engagement and offered her financial compensation. Flora is living on next to nothing but the charity of Mrs Meldrum.

The Narrator goes back to America for three years, whilst Flora and Mrs Meldrum go abroad. When the narrator returns to London he sees Flora at the opera, looking more beautiful and well off than she has ever done before.

But when he goes to join her in her theatre box he discovers that she has gone blind. She has in fact married Dawling, who continues to be devoted to her. The narrator hurries to Mrs Meldrum for a full account of events, but she doesn’t want to discuss the matter.