GPO Design is a very stylishly produced collection of posters and information graphics commissioned for the postal services between 1930 and 1970. It’s supported by a well-informed essay on the relations between government, propaganda quangos, and the world of what was then called ‘commercial art’. It has always been a mystery to me why a monopoly should feel the need to advertise its services. Mrs Average of Pinner, Middlesex has until very recently had no alternative but to use Royal Mail to deliver her birthday cards and letters to friends. The same has also been true for gas, water, and electricity. Nobody had access to alternative services, so why bother to advertise their virtues? 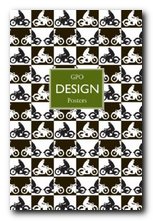 But the GPO has from its earliest years made a habit of commissioning artists to design posters to promote its services and reminding us to post early for Xmas. In fact there has been a quite deliberate campaign to both educate the public and promote an impression of efficient, modern technology driving communications at a national level. This has been coupled ideologically with folksy images of the village postman delivering letters in all weathers, and at the same time promoting an empire of connectivity that embraced the globe.

But not all the postal service’s posters and advertising campaigns were corporate vanity. The campaign to advertise postage stamps in little booklets was apparently an attempt to reduce the waiting time spent queuing to buy a single stamp.

It’s not surprising that all decision making in matters of acceptability was in the hands of establishment appointees who despite their efforts to employ modern artists, generated an output that was pretty near indistinguishable from Soviet propaganda posters of the same era 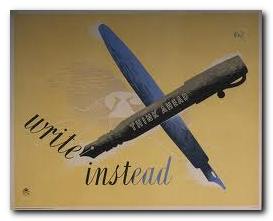 The range of artists and designers they did use included E.McKnight Kauffer, Graham Sutherland, Duncan Grant, and Vanessa Bell. But the most artistically advanced was Hans (Zero) Schleger, one of the many European immigrants who fled to Britain during the inter-war years.

Paul Rennie suggests however in his contribution to the elegant Design series that their work was more successful politically and technologically than their Soviet and Nazi counterparts. He also points out that the GPO’s emphasis on the modern technology of communication – cars, boats, trains, telephones – was a distinctly progressive and modernist theme radiated into society by its educational and service-promoting publicity.

The examples in this collection from the award-winning series are drawn from the poster collection of the British Postal Museum and Archive in London. It sits very neatly alongside its recent fellow publications on David Gentleman, El Lissitzsky, and Alexander Rodchenko.