second volume of the definitive biography

The first volume of this masterly biography ends in 1934 with the death of Diaghilev, Igor Stravinsky’s composition of Persephone, his adoption of French citizenship, and his no less important decision to move his extended family from the south of France to take up residence in Paris – in the next arrondissement to his lover, Vera Sudeykima.

To give some idea of the complexities of these arrangements, Stravinsky not only made it known to his wife that he paid Sudeykima an allowance, but as if this was not enough he heaped onto it the additional humiliation that in his absence she should hand over the money to her in person – which she did. 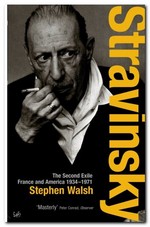 The second volume opens with the darkening years of the mid-1930s, and Stravinsky remaining as politically naive as ever in the face of rising fascism and anti-Semitism. The only thing which seemed to disturb him was a general assumption that he was Jewish – which was not the case. He continued to give his moral if not practical support to Mussolini and Franco, and he conducted the Berlin Philharmonic in 1938 with the somewhat disingenuous excuse that he needed the money to pay his daughter’s medical bills.

As the 1930s progressed Stravinsky’s personal life seems to have become worse and worse. There were problems with his four children, all of whom had difficulties creating independent destinies for themselves, permanently overshadowed as they were by the fame and the rather dictatorial manner of their father. His wife Katya became ill and was confined to an Alpine sanatorium, run along similar lines to the Berghof in Thomas Mann‘s The Magic Mountain. Her daughter accompanied her on the journey, and was also kept there as a patient.

Then in 1938 fate struck a double blow. First Stravinsky’s daughter died, then his wife. Yet so many people rallied to help him that within a short time he had secured a teaching post at Harvard, married Sudeykima, and he ended up living in California – like Arnold Schoenberg ‘expelled into Paradise’.

This was a period in which he tried without much success to find work composing for the film industry. He knew all the right people, and Hollywood was happy to adapt his earlier works, but none of the big projects mooted came to fruition. Instead, he produced such miniatures as the Circus Polka for dancing elephants and the Ebony Concerto for Woody Herman’s band. However, he came back in full force with the composition in 1946 of the Symphony in Three Movements.

Interestingly enough the copyright issue crops up yet again (just as it did in the first volume) – but with a new twist. Stravinsky and his advisors hit upon the ruse of his revising earlier pieces of work. If they could be made sufficiently distinct from the originals, they could be re-copyrighted. Moreover, if Stravinsky took out US citizenship (which he promptly did) he would have full protection and ownership of the new versions – which could be translated into hard cash.

The war in Europe had one good effect on Stravinsky: it caused him to re-think his reactionary political views – rather as it did for his fellow-exile Thomas Mann. He became a Trueman-supporting democrat.

If Diaghilev was the presiding secondary figure in Volume One, the equivalent figure in Two is Robert Craft. He was a young American student of composition and conducting who managed to inveigle himself into the Stravinskys’ affections to such an extent that he became a combination of amanuensis, secretary, manager, advisor, and even domestic help. He also had close access to Stravinsky’s manuscripts – which was to cause a lot of trouble later.

Musically, the centrepiece of this second volume is the composition of The Rake’s Progress which took three and a half years. He worked with Auden and Chester Kallman as librettists. This was followed by Agon and the premiere of Canticum sacrum in St Mark’s, Venice. From this point on, his compositions became increasingly influenced by a Schoenbergian twelve-tone scale form of writing, even though he had kept himself at a very long arm’s length during his rival’s own lifetime.

Since Stravinsky’s personal life had settled into an almost conventional marriage with Vera, Walsh’s account now begins to focus on a concert-by-concert account of his professional life: (Stravinsky maintained that he earned his living as a conductor). Walsh records every possible detail of the choice of programme, the fee paid, the musical rehearsals, and the roles played by agents, go-betweens, and performers.

The latter part of the book traces Stravinsky’s last (and serial) compositions, but it is really a detailed examination of just how much Robert Craft controlled, contributed to, or even created works which were published under Stravinsky’s name. He also began writing letters and memoirs which were attributed to the man who was in a roundabout way his employer.

As Stravinsky declines into ill-health approaching death, the story becomes an almost nineteenth-century inheritance drama of tax lawyers, relatives, Craft, and various hangers-on vying for control of Stravinsky’s assets and archive with a view to lining their own pockets. And when he did eventually expire the conflict between warring parties became pure Jarndyce Vs Jarndyce, with the widow Vera eventually paying out $200,000 to retain control – and even that was only an interim measure. The dispute continued even after her death; the relatives died off in their turn; and even the eventual purchaser of the archive, Paul Sacher, was duped out of almost two million dollars by the lawyers.

Fortunately for us, the music lives on.

See part one of this biography