essays on classical and contemporary music

Listen to This is the follow up to Alex Ross’s The Rest is Noise: Listening to the Twentieth Century which was a huge success when it was published last year. His new book is a collection of essays which first appeared in The New Yorker where he is resident music critic. Some readers will be amazed at the wide variety of music he covers. In one sense (to use the language of record producers) he’s monetising his back catalogue, because some of the essays date from as long as nearly twenty years ago. 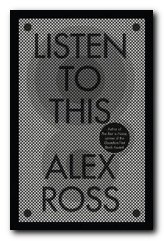 In the magazine and on his blog at The Rest Is Noise he makes a vigorous effort to document, expand, and proselytise on behalf of contemporary music. And I use the term ‘contemporary’ for two reasons. The first is that although much of his writing is concerned with the traditions of church, concert hall, and chamber music stretching from the early renaissance to the present day, he rejects the term ‘classical’ as inaccurate and restricting. It does not include what we now call ‘early music’ and it excludes music being written and performed by living composers. The second reason is that it also excludes music from other genres, such as jazz, experimental modernism, and rock – some of which attract far more listeners than any ‘classical’ music has ever done.

This collection seeks to redress this narrowness and imbalance by including essays on pop and contemporary art music, alongside pieces on Brahms, Schubert, and Mozart. Not that he is entirely at ease in embracing these apparently contradictory enthusiasms. In his opening essay he wrestles with this seemingly conflicting taste for classical and pop music, and it’s significant that whilst his love of traditional music is rooted in composers such as Beethoven, Mahler, and Wagner, but he can look beyond these to modern symphonic music, his taste in popular genres is far less mature and well-informed. He’s attracted to superficial pop stars, white American rock music, and even talentless wannabes such as Bjork.

He also touches in his introductory essays on a far more interesting and fundamental issue. How is it possible, he asks, to write critically and analytically about music, when it is an abstract form of expression? Because music, despite all its power to move us emotionally, doesn’t actually mean anything. How can this be true, when so many people find such a great deal of satisfaction in listening to it? This is a paradox to which he never really finds a solution.

Ross is an incredibly fluent and entertaining writer, and he can go on for several hundred words describing his reaction to Beethoven’s Eroica. But ultimately, his account of this experience comes down to what he rightly calls the ‘purple’ school of music criticism – ‘Beethoven’s Fifth symphony begins with fate knocking at the door’.

There’s an essay on Mozart in which he examines the composer’s greatness in the process of reviewing a Philips’ issue of the complete works on 180 CDs. This gives him the opportunity to spot evidence of links between dramatic situations and musical motifs in pieces written many years apart – which he offers as evidence for the notion that Mozart had these constructions wired into his inventive DNA.

He is drawn towards biographical interpretation, but has to admit that there is precious little evidence to support it. The fact is that artists can create tragic art works during happy periods of their life – and optimistic upbeat works when they’re in the middle of personal tragedies.

An essay on the pop group Radiohead is not much more than a well-written character sketch of the band members, with some festival rock atmosphere thrown in. It’s the sort of thing which does not help his cause to enlarge the scope of what he calls ‘the music’ at all. The documentary-journalistic approach is much better employed when he gives an account of classical music in contemporary China.

The same is true of his essay on Bob Dylan. There’s plenty of biographical anecdote stressing his eccentric behaviour and amazing productivity, and in-depth consideration of ambiguity in his lyrics – but very little about the music itself. The most interesting detail to emerge from what is obviously a close acquaintance with his live concerts and recorded work is that Dylan constantly reshapes his own material – adding new lyrics to songs, changing their harmonic structures, and even recycling old lyrics with new melodies. Jazz musicians do this all the time, but it is unusual in both pop and ‘classical’ music, and it strikes me as being a topic worthy of further examination.

He has what can only be called a weakness for experimentalism. [I was surprised at his taking John Cage seriously in The Rest is Noise.] Here he creates a touching portrait of John Luther Adams, giving a sympathetic account of compositions for ninety voices that last for six hours, and continuous music that is ‘composed’ by seismic readings and temperature measurements from local meteorological stations. This is music you can ‘live in’, music that never ends – which begs the question of whether it is music at all.

Naturally he is in favour of bolstering more public support for musical education and participation in the arts, but he doesn’t seem to understand that culture in any society is produced with what’s left over after the basic requirements for survival have been met. A nation with half its population living on food stamps and state benefits hasn’t got the resources to spare for violin lessons for underprivileged children – whose parents don’t have the money or the inclination to attend concerts of classical music. In other words, his heart is in the right place, but he doesn’t seem to have thought through the relationship between art and economics. Only societies with large budget surpluses can afford to subsidise nineteenth century sized orchestras.

The best essay in the collection is his most recent – a virtuoso survey of the descending base line which appears throughout western musical history in forms from the chaconne to the twelve bar blues. This manages to combine the technical analysis of music with the ‘purple’ approach to criticism, arguing that there is something fundamental in this progression which illustrates a ‘meaning’ in this seemingly most abstract of art forms. After all, it is no accident that most ‘sad’ music is written in minor keys.

He’s amazingly well informed about the world of music as a profession, and sandwiched within these essays there are some fascinating insights which could easily be expanded into articles in their own right – the history of applause at concerts for instance, or the fact that the average member of the Berlin Philharmonic is a generation younger than the Rolling Stones.

Although it lacks the continuous narrative and the intellectual rigour of The Rest is Noise this is a fascinating collection of studies that brings an infectious enthusiasm to the appreciation of music. He doesn’t solve either of his two main problems, but his exploration of the issues is inspiring and certainly promotes the urge to listen more.