Madame de Mauves first appeared in The Galaxy magazine for February—March 1874. It was reprinted a year later as part of James’s first book, The Passionate Pilgrim and Other Tales, published by Osgood in Boston, 1875. 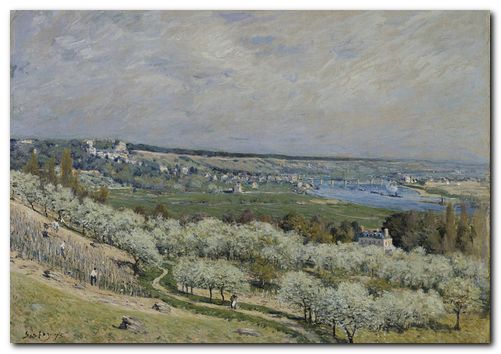 Saint-Germain in Spring – by Alfred Sisley

This is an astonishingly mature work for such a young writer. James was only slightly over thirty years old at the time of the tale’s publication, and he had just come to the end of a ten year apprenticeship in writing reviews and short stories. He had yet to write any major work, but Madame de Mauves certainly points to his potential ability to do so. The theme of people entombed in unhappy relationships and solving their problems by renunciation is something he would explore in The Portrait of a Lady written only a few years later.

As someone who had lived on both continents, James made the juxtaposition of America and Europe into one of his favourite subjects. Here the contrast is made between the two Americans Longmore and Euphemia de Mauves, and the Europeans (French) Count Richard de Mauves and his sister-in-law Madame Clarin.

Mauves belongs to an old aristocratic family which has no money. So he marries the wealthy Euphemia and reverts to family type by ignoring his marriage and indulging in petty affairs almost as a way of life. Madame Clarin explains all this to Longmore, including the fact that the family has a long tradition of suffering wives who have tolerated such behaviour for the sake of the family’s ‘name’ in society.

Count Mauves has noticed Longmore’s interest in his wife, and encourages his attentions, hoping that the two of them will begin an affair which will in its turn justify his own way of life. To contemporary readers this might seem like an improbably melodramatic plot device, but in fact it is based on the historically sound observation that amongst the upper classes, sexual fidelity has never been a high priority.

So long as the appearance of propriety was maintained and no scandal allowed to sully a family’s name (a collective responsibility) adulteries of all kinds could be incorporated into the practices of upper-class life. Husbands did not have to give any reasons for being absent from their families. Wives could amuse themselves with any number of married or single men (as Euphemia does with Longmore).

The prime objective was to consolidate the family unit as a symbol of accumulated capital and property – which is why Count Mauves’ eventual suicide has been criticised by some commentators as somewhat improbable. There is no reason why he should not merely revert to his previous adulteries and keep the family and its name intact and unsullied.

Of course all this throws French society into a very dubious light compared with the upright behaviour of the two principal Americans. Longmore and Euphemia clearly love each other, but she manages to persuade him to adopt the honourable route of renunciation and self-denial. Madame Clarin on the other hand offers Longmore a ‘devil’s pact’ argument that the family traditions provide an open pathway to socially sanctioned adultery. The two Americans take the honourable way out, at the expense of their own personal happiness.

Part I. Rich American Longmore has been in Saint Germain for six months when his fellow American acquaintance Mrs Draper introduces him to Madame Euphemia de Mauves. She is a rich American woman married to a Frenchman who is intent on spending all her money. She is domestically unhappy, and Mrs Draper encourages Longmore to ‘entertain’ her.

Part II. Euphemia has been educated in a convent and has generated a romantic ambition to marry an aristocrat. Her childhood friend Marie de Mauves invites her to the ancestral home in the Auvergne, where old Madame de Mauves advises her to ignore moral niceties and act pragmatically.

When Richard de Mauves arrives, Euphemia sees him as the epitome of an aristocratic gentleman – although he is in fact a wastrel with unpaid bills. When he proposes marriage, Euphemia is very happy. But her mother imposes a two-year ban on the relationship – but at the end of it she marries him.

Part III. Longmore visits Madame de Mauves and marvels at her resignation. Euphemia’s sister-in-law is married to a wholesale pharmacist who gambles and loses on the stock exchange, then commits suicide. The widow pays court to Longmore, who dislikes her.

He ought to join his old friend Webster in Brussels for a holiday, but feels obliged to ‘support’ Madame de Mauves in her unhappiness. Her husband absents himself from the family home, but is amazingly polite to Longmore and encourages him to keep visiting.

Part IV. Webster writes to Longmore, asking about their planned holiday. Longmore asks Euphemia if she is happy or not – and she tells him it is an entirely private matter, and encourages him to join his friend on holiday. As he takes his leave he is patronised by the Count. Longmore writes to his friend Mrs Draper with his assessment of Madame de Mauves and her husband.

Part V. Longmore goes to Paris, but instead of going on to Brussels, he lingers there, thinking about Madame de Mauves and wondering if he is in love with her or not. Whilst dining in the Bois de Boulogne he sees the Count with a woman of the streets. He returns immediately to Saint Germain where he and Madame de Mauves discuss her situation and his wish to ‘support’ her – during which the Count casually passes by. Longmore is teased and patronised by Madame Clarin.

Part VI.When Longmore next visits the house, Madame de Clarin recounts to him the family history of faithless husbands and long-suffering wives. She also reveals that because the Count’s latest ‘folly’ has been discovered, he has suggested to his wife that she take Longmore as her lover, to form a social quid pro quo.

Part VII. Longmore takes a bucolic interlude in which he meets a young artist and his lover at a country inn, then falls asleep in the forest and dreams of being separated from Madame de Mauves by her husband.

Part VIII. When Longmore next meets Madame de Mauves she wants him to make a big sacrifice for both of them (by renouncing her) – so that she can continue to have someone to look up to and respect.

Part IX. Lomgmore is deeply conflicted on the issue, and he wonders why Euphemia should be so self-denying and stoical. He retreats to Paris to think about his decision. Once again he bumps into the Count in a compromising situation. Longmore leaves Saint Germain, and the Count is severely discomfited.

Part X. Two years pass, then Longmore learns from Mrs Draper that the Count repented and begged to be re-accepted by Madame de Mauves. She refused to accept him, so he committed suicide. Longmore returns to America and remains there.