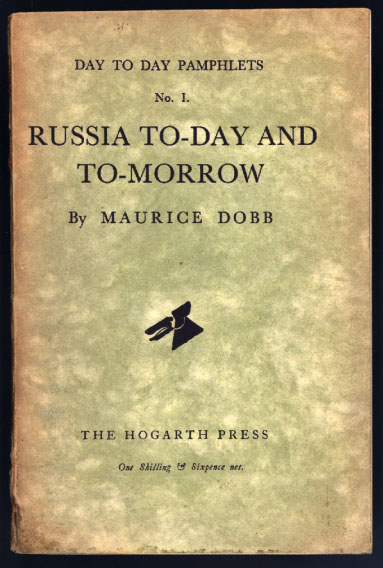 The colophon design was by the American artist E.McKnight Kauffer. It was used on many other Hogarth publications as an alternative to the original dog’s head design by Vanessa Bell. Price 1s. 6d.

“Reporting on his second trip to Russia in 1929, Dobb provided in six chapters a perceptive, generally approving, but not uncritical survey of Soviet history, politics, economics, industrial development, and cultural revolution. His visit came just after the relaxed and stimulating New Economic Policy period (1921—28) had been controverted by the Five Year Plan and the Russian Association of Proletarian writers. While Dobb recognised the increasing pressure for conformity to Marxist ideology, he still reported finding tolerance for experimentation in the arts.”