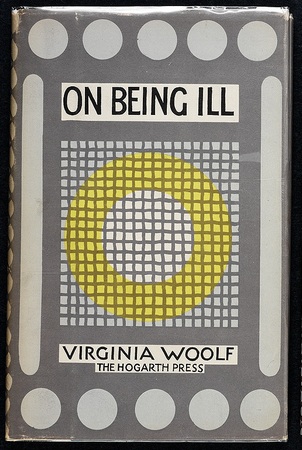 Virginia Woolf, On Being Ill (1930) Cover design by Vanessa Bell.

“Not until 1930 did [Virginia and Leonard Woolf] hand print another of Virginia’s works, a small essay On Being Ill. To possible critics of the slightly botched printing of On Being Ill Virginia composed a tongue-in-cheek form letter which she never sent. Such a charming disclaimer could well serve as a summing up of the Woolf’s hand printing over the years. Beginning “Dear Madam,” Virginia agreed that “the colour is uneven, the letters not always clear, the spacing inaccurate, and the word ‘campion’ should read ‘companion””. Her defense was that she and Leonard were amateur printers without formal training, who fit in their hobby amid busy lives. But, she added, the volume was already worth more than it cost because of over-subscription, so that although “we have not satisfied your taste, we hope that we have not robbed your purse”.

One of the last books hand printed by the Woolfs, On Being Ill is a fairly short essay by Woolf that explores not only illness, but also solitude, sympathy, and reading. Woolf writes, for example, that in illness “It is to the poets that we turn. Illness makes us disinclined for the long campaigns that prose exacts” The words of On Being Ill are both written and printed by Woolf. The book shows a greater sophistication than some of the earlier books, though there are still some errors that remind one that humans rather than machines created the book.