Mora Montravers was first published in the English Review in August-September 1909. It deals with a subject which was very popular around that time – the new woman. Since the 1880s and 1890s women had been fighting for independence, voting rights, and reform of the divorce laws. Alongside these larger political matters, they had also been claiming the right to make their own life choices. James deals here with these issues in his characteristically ambiguous manner. 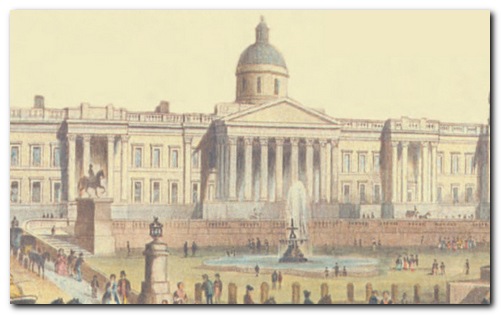 Sydney Traffle is nurturing a subconscious desire for his wife’s beautiful young niece Mora, which causes friction in his marriage to Jane. They take different views on what should be done about Mora’s independent action in leaving them.

When Mora goes to ‘live with’ painter Walter Puddick, Jane is horrified, but her husband Sydney feels sympathetic towards Puddick, but misses Mora.

Despatched to deal with the problem, Sydney has an epiphanic meeting with Mora in the National Gallery but she turns out to be meeting another man (Sir Bruce Bagely).

When Sydney returns to deliver the news to his wife, the carpet is pulled from under his feet. She already knows all the news, has had a visit from Puddick, and looks forward to developing her relationship with him.

This is a slightly credibility-stretching volte-face on her part, but a neat reversal of the emotional power struggle between Sydney and his wife. It’s as if they are acting out their latent hostility towards each other via proxy. Sydney has condoned Mora’s actions in order to stay as close to her as possible, but he is outwitted by Jane, who constructs a relationship with Puddick that eclipses her husband’s with Mora.

In this reading of the story, Mora is a catalyst – not the main subject. The story is about tensions within the Traffle marriage, and the surprising outcome of their connections with two other people – Mora and Puddick.

The question remains – is Mora innocent or not? Sydney believes she is; Walter Puddick says she is; but Jane Traffle finally believes she is not. Mora does plan to leave her ‘husband’ only four weeks after marrying him. However, the technicalities of the marriage are described in such dismissive terms, it seems almost possible that it could be annulled.

We simply do not have enough hard evidence to make a judgement. Mora is obviously a New (young) Woman who is capable of acting in an independent manner. But there is little evidence of a convincing connection between Mora and Jane Traffle’s abrupt change of attitude towards her.

Part I. Sydney and Jane Traffle have looked after her niece Mora Montravers as a young woman since the death of her parents. Mora has now put them in a socially embarrassing position by going to live with her painting teacher Walter Puddick.

Part II. They disagree about the appropriate course of action that should be taken. Jane thinks Mora’s behaviour is reprehensible and wishes Puddick to regularise the situation by marrying Mora. Sydney Traffle thinks the girl is best left alone to find her own way, and as a fellow painter, he quite likes Puddick’s work.

Part III. Mora suddenly visits the Traffles – though Jane refuses to meet her. Mora explains that she simply wants to keep in touch with the family. Sydney Traffle accepts Mora’s position, but Jane wants something to be done about it.

Part IV. They summon Walter Puddick to a meeting where Jane treats him imperiously, demanding to know details of his relationship with Mora. He tells her nothing, except that he adores Mora. Jane tries to bribe him with offers of an allowance if he will marry Mora, and she insists that he tell Mora – which would put him into a compromised position with her. Sydney is sympathetic to his case, but still manages to patronise him.

Part V. Some time later, Sydney is tempted to seek out Mora. He is wandering around London when he bumps into her in the National Gallery. She reveals to him that she is now married, but wants her aunt’s promise of an allowance to go to Walter Puddick, who she is leaving for another man.

Part VI. Sydney returns home reluctantly to break the news to Jane, but he finds her curiously calm and positive. It transpires that she has had a visit from Walter Puddick, and he has relayed the whole story to her. She now feels a positive duty to support him financially with Mora’s dowry; she believes Mora was a bad lot all along; and she looks forward to visiting Puddick’s studio to develop an interest in his art.