My Friend Bingham first appeared in The Atlantic Monthly magazine for March 1867. Its initial appearance in book form was as part of the collection Eight Uncollected Tales of Henry James published by Rutgers University Press in 1950. 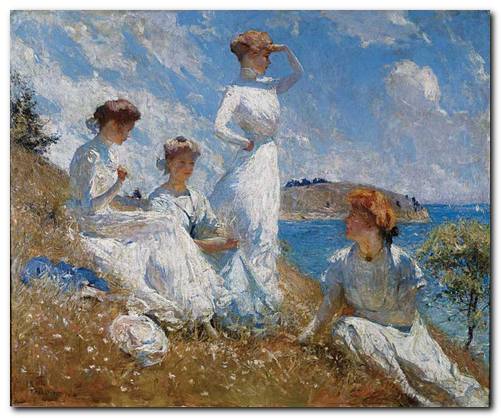 It is difficult to know what to make of this very early story except as a very oblique take on the theme of ‘fear of heterosexual intimacy’ – a theme which certainly sits comfortably alongside many of James’s other tales. Bingham has returned from the grand European tour with the resolution that he will not get married. However, he is accidentally brought into contact with Lucy. Quite apart from her intelligence and integrity (which are told about, but not shown) she is a widow.

One cannot escape the ‘shotgun’ connection between this meeting and marrying her. He even provides the gun himself. In other words, he feels obliged to compensate for the accidental shooting of her son by making her an offer of marriage. But following the marriage she never has any other children – so he escapes the fear of procreation after all.

Charles the narrator and his close friend George Bingham decide to spend a summer holiday together by the sea. Bingham, after travelling in Europe, has decided not to get married. Whilst they are on the beach hunting duck Bingham accidentally shoots a young boy who is playing with his mother.

Charles visits Lucy the grieving mother and offers to help. She is very forgiving and understanding about the accident. The two men attand the boy’s funeral, after which Charles returns to New York.

Ten days later Bingham visits Charles to say how impressed he is with Lucy, then goes off to see her again. He reports back to say that he is even more impressed with her, and finally admits to Charles that he has fallen in love with her.

However, on his next visit he reports that Lucy has been expelled from her holiday cottage by the landlady Miss Horner, who disapproves of the liaison, and so Bingham has brought Lucy back to New York. Charles goes to visit Lucy, and he too is very impressed by her intelligence and integrity.

When he nexts goes to visit her, Bingham is there, and announces that he has asked her to be his wife. She accepts him; they are happily married; but she never has any other children.