Let’s tackle this issue head-on by registering an inescapable truth: almost everybody feels nervous and anxious about examinations. Certainly I have never met anybody who did not, and it would be very strange if this were otherwise, because examinations are usually a special sort of test which put us under a lot of pressure. They are an important assessment, and a one-off occasion requiring our best possible performance. When we take an examination therefore we have good reason for feeling anxious – wondering if we will be able to do ourselves full justice. 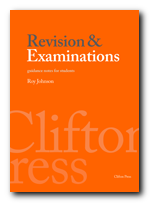 Nevertheless, some people feel so apprehensive and nervous that it prevents them from giving their best, and it might even block them completely. They might have put lots of effort into their studies and produced all the necessary coursework, but their fear of exams is so intense that they spend more time worrying than revising. Then they worry that they haven’t done the necessary preparation; they feel a growing sense of paralysis as the Big Day approaches; and they may even worry that they have been worrying. The scope for an accumulation of self-doubt, anxiety, fear, and trepidation is almost limitless.

What we will do in this chapter is look at the phenomenon of nervousness and anxiety in these circumstances, then try to dispel a few myths which surround the topic of examinations. Then we will consider some tips on what are basically methods of promoting feelings of calmness and relaxation. We can’t get into people’s psyches through the written word, but it might be possible to offer help in promoting a more relaxed and self-possessed state of physical being.

On this phenomenon of nervousness before an important test it might be helpful for those who do not already know it to learn that many actors, public speakers, and even champion athletes suffer from nerves before a performance or an important event. Stand-up comedians who seem supremely confident on stage sometimes admit to being physically sick with anxiety in their dressing rooms before facing an audience. Olympic contestants can often be seen in very agitated states, pacing around and unable to remain still as they wait for their events to begin. What these two groups of people have in common is that they are about to face an important challenge, a performance by which they will be judged and measured, an event which may mark a significant point in their reputations and future prospects.

Physiologically speaking, their bodies are behaving very properly. Faced with an important challenge, lots of nervous energy (adrenalin) is being pumped into their systems to cope with the task which is to be performed. The important thing to realise is that the success of such people lies in their harnessing and putting to use this nervous energy for the very purpose it is being generated. They do not squander it, but direct it to the goal for which it is intended. This means making sure that it is all focused upon the star performance or the record-breaking achievement in which they are prepared to give their all.

To extend the comparison a little further, many of these experienced public performers actually retreat into themselves before facing their tasks and actually intensify this energy release by ‘psyching themselves up’. They know that this nervous energy can be converted to their advantage and they actually promote more of it.

There is nothing wrong with such states of anxiety: they are perfectly natural, they are commonly felt by most people, and they have a logical source and function. The secret as far as examinations is concerned is to make sure that this nervous energy is not dissipated into nail-biting and what is called ‘displacement activity’ – painting the garden shed instead of revising. It should be focused instead onto the extra bouts of intellectual work designed to reach their fruition on the day of the examination itself.

The first thing you can do is to realise that tension and nervousness are absolutely normal and represent energy which can be put to positive use. This higher-than-usual degree of tension may make you more alert; it may allow you to concentrate for longer periods, speed up what you do, and give you the ability to focus more intently on the issues in hand. You will be doing yourself a favour and enhancing your chances of success by converting the negative aspects of your concern into positive energy productively applied to the task before you.

For instance, try to remind yourself that having reached whatever point you are currently at means that you have engaged with the content of your course; you have studied topics which many other people have not; and the overwhelming likelihood is that you will pass the examination. Particularly if you have passed examinations in the past, remind yourself that there is every reason to think that you will do so again.

This is stage one – taking a positive view of yourself. Stage two is possibly even more important for the persistent worrier. Try to stop yourself dwelling on fears of difficulty or failure. These negative thoughts are no use to you at all, and they are wasting your valuable time which should be spent in active revision. There may even be a certain degree of self-indulgence in the worst cases. Some people forget that they are supposed to be thinking about the subject(s) of an examination and focus all their attention on their own weaknesses and inadequacies (as they perceive them). In other words, they change the focus of their attention from the exam to themselves. This too is wasting time: you should be focusing attention on the tasks of revision rather than on yourself.