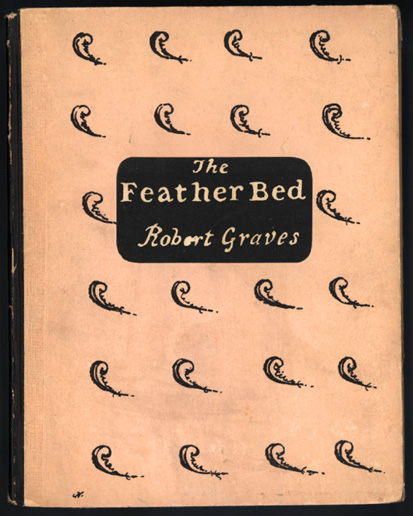 Cover design by William Nicholson. Number 210 of 250 copies signed by the author.

“As the books and pamphlets on political subjects grew in number and importance, the Woolfs continued to publish more volumes of poetry, fiction, and literary criticism in 1926 than in any other areas. A significant event was the publication of another book in 1926 by Robert Graves. He published a pamphlet on poetry and brought with him Laura Riding. Graves met Laura Riding Gottschalk in 1926 after he had published his first Hogarth Press essay on modern poetry.”

The Hogarth Press published a total of seven works by Graves, the first of which was The Feather Bed. This book consists of an “Introductory Letter” to John Crowe Ransom (his name misspelled “Ransome”) and an unconventional poem: a young man’s monologue that focussed on “internal debate about the nature of love, sexuality, and the religious calling of nuns and priests”. The book generated interest and sold quite well, though no subsequent edition of the poem was issued. The painter William Nicholson, Graves’s father-in-law, provided the cover for the book.