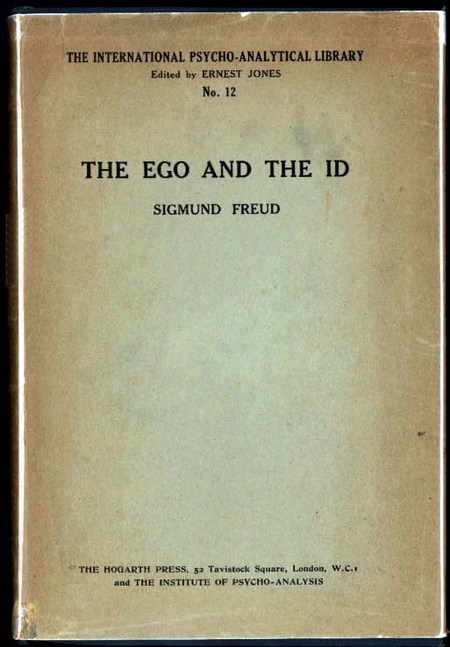 Sigmund Freud, The Ego and the Id (1927) The International Psycho-Analytic Library, No.12

“From 1922 to 1939 the International Psycho-Analytic Library offered nine of Freud’s books and two Epitomes. Joan Riviere translated two of the nine books, James Strachey two books (Group Psychology and the Analysis of the Ego, 1922, and An Autobiographical Study, 1935), and Alix Strachey one book (Inhibitions, Symptoms, and Anxiety, 1936). Only four other translators were entrusted with translating Freud’s books in the series: C.M.J. Hubback (Beyond the Pleasure Principle, 1922), W.D Robson-Scott (The Future of an Illusion, 1928). W.J.H. Sprott (New Introductory Lectures on Psycho-Analysis, 1933), and Katherine Jones (Moses and Monotheism, 1939).”

It was James Strachey, Lytton Strachey’s brother, who arranged to have the Hogarth Press become the publisher for the books of the International Psycho-Analytic Library in 1924. The Press bought the rights to the previously published titles in the ILP series, inheriting the already printed volumes (bearing the International Psycho-Analytic Press imprint) along with the rights to Freud’s Collected Papers for £800. Thus the Hogarth Press became the publisher of Freud in English, making a major contribution to twentieth-century thought and increasing the international importance of the Press. Freud’s Collected Papers also became one of the Press’s most successful publications. Freud’s reputation grew tremendously in the 1920s and 1930s. The Ego and the Id, along with other works by Freud, were an important part of the Press list for decades.