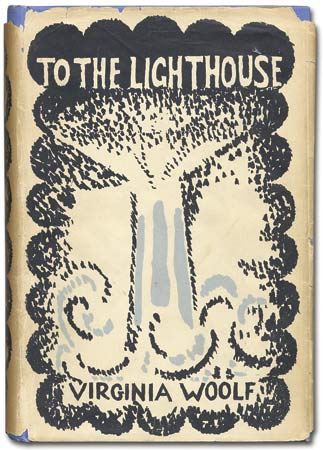 Virginia Woolf, To the Lighthouse (1927) Cover design by Vanessa Bell.

“Advance sales totaled over 1,600 copies, more than twice the number for Mrs Dalloway. Virginia’s mood at the time expressed itself in her gaily ironic joke with Vita Sackville-West. When Vita returned from her second trip to Persia, she found a copy of To the Lighthouse waiting for her, inscribed by Virginia, “In my opinion the best novel I have ever written”. It was a bound dummy copy, with blank pages. Leonard Woolf, anticipating both an artistic and a commercial success for To the Lighthouse, ordered 3,000 copies printed by R. & R. Clark (a thousand more than Mrs Dalloway) and quickly ordered another 1,000 copies in a second impression. The novel outsold her previous fiction. The American publisher of Hogarth Press books, Harcourt Brace, printed 4,000 copies initially (almost twice the number of copies for Mrs Dalloway). American readers had begun to take notice of Woolf’s novels.”