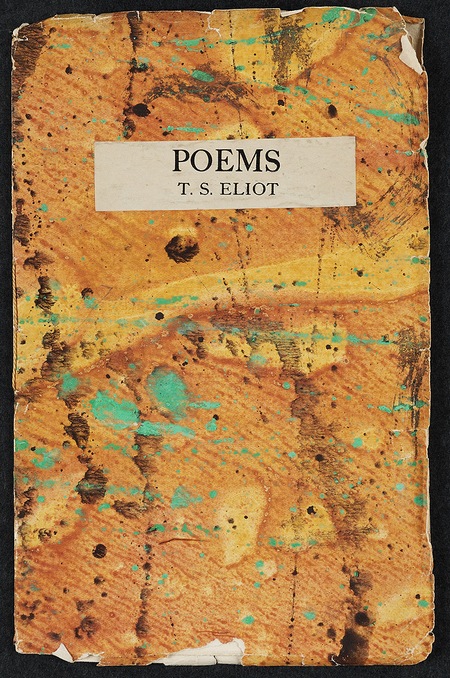 This was the third publication of the Hogarth Press. It includes the poems ‘The Hippopotamus’, ‘Le spectateur’, ‘Mélange adultère de tout’, ‘Lune de miel’, ‘Sweeney among the Nightingales’, ‘Mr. Eliot’s Sunday Morning Service’, and ”Whispers of immortality’. All seven of the poems had appeared previously in the Little Review.

We took a good deal of trouble to find some rather unusual, gay Japanese paper for the covers. For many years we gave much time and care to find beautiful, uncommon, and sometimes cheerful paper for binding our books, and, as the first publishers to do this, I think we started a fashion which many of the regular, old established publishers followed. We got papers from all over the place, including some brilliantly patterned from Czechoslovakia, and we also had some marbled covers made for us by Roger Fry’s daughter in Paris. I bought a small quantity of Caslon Old Face Titling type and used it for printing the covers.

The publication of T.S.Eliot’s Poems must be marked as a red letter day for the Press and for us … Tom showed us some of the poems which he had just written and we printed seven of them and published them in the slim paper covered book. It included three remarkable poems which are still, I think, vintage Eliot: ‘Sweeney among the Nightingales’, ‘Mr. Eliot’s Sunday Morning Service’. and ”Whispers of immortality’.”