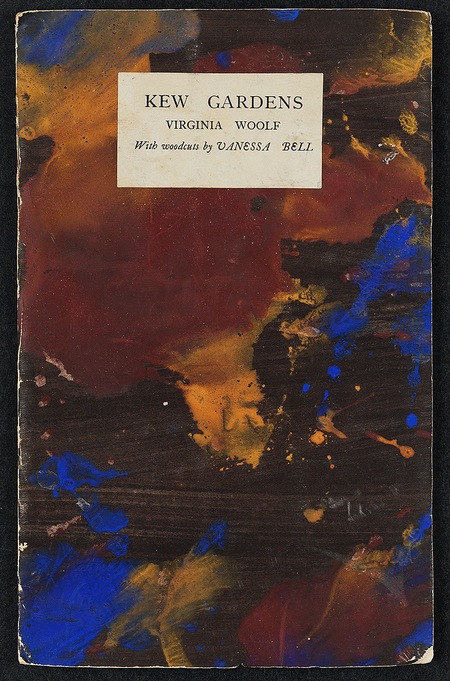 This publication contained only ten pages of text, with illustrations by Vanessa Bell.

“In 1918 we printed two small books: Poems by T.S. Eliot and Kew Gardens by Virginia. Of Kew Gardens we printed about 170 copies (the total sold of the first edition was 148). We published it on 12 May 1919 at 2s. When we started printing and publishing with our Publication No. 1, we did not send out any review copies, but in the case of Prelude, Tom’s Poems, and Kew Gardens we sent review copies to The Times Literary Supplement. By 31 May we had sold forty-nine copies of Kew Gardens On Tuesday 27 May, we went to Asham and stayed there for a week, returning to Richmond on 3 June. In the previous week a review of Kew Gardens had appeared in the Literary Supplement giving it tremendous praise. When we opened the door of Hogarth House, we found the hall covered with envelopes and postcards containing orders from booksellers all over the country. It was impossible for us to start printing enough copies to meet these orders, so we went to a printer, Richard Madely, and got him to print a second edition of 500 copies, which cost us £8 9s. 6d. It was sold by the end of 1920 and we did not reprint.”