Nightwood was first published in 1936 when Djuna Barnes was at the height of her short-lived fame as a doyenne of the literary modernists. She was published by Faber and Faber, and the book was personally endorsed by its editor in chief at that time, her fellow American T.S.Eliot The novel has been kept alive and in print ever since on the strength of his enthusiastic preface, whilst Barnes herself sunk rapidly after its publication into an unproductive alcoholism for more or less the rest of her life, living on an allowance supplied by her rich patroness, Peggy Guggenheim. 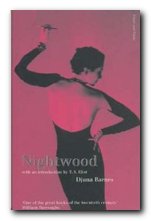 It’s easy to see why Eliot was a supporter. Barnes uses the same techniques of literary collage, fragmentation, and striking if unrelated images as he had made famous in The Waste Land. And she’s also much given to the sort of semi-mystical abstract generalisation that characterise The Four Quartets.

The narrative such as it is, comprises a series of interlocking character sketches. A portrait of the garrulous transvestite Doctor O’Connor is followed by ‘Baron’ Felix Volkbein and his failed marriage to Robin Vote, who then forms a lesbian relationship with Nora Flood (a thinly disguised portrait of Barnes herself). When Robin meets the rich and much married Jenny Petherbridge they run away together, taking with them Sylvia, a young English girl, who is herself in love with Robin. Nora spends long periods in acute anguish, pining after the elusive Robin. She appeals to the doctor for sympathy, to which he responds with lengthy inconsequential monologues which stretch on for several pages at a time:

The almost fossilized state of our recollection is attested to by our murderers and those who read every detail of crime with a passionate and hot interest … It is only by such extreme measures that the average man can remember something long ago, truly, not that he remembers, but that crime itself is the door to an accumulation, a way to lay hands on the shoulder of a past that is still vibrating.

Barnes’s prose style is characterised by long convoluted sentences in which the subject switches from one topic to another without any apparent reason. She also uses extravagant similes and metaphors that are over-elaborated in a way which takes attention away from any perceptible story:

As the altar of a church would present but a barren stylisation but for the uncalculated offerings of the confused and humble; as the courage of a woman is made suddenly made martial and sorrowful by the rose thrust among the more decorous blooms by the hand of a lover suffering the violence of the overlapping of the permission to bestow a last embrace, and its withdrawal making a vanishing and infinitesimal bull’s eye of that which had a moment before been a bouyant and showy bosom, by dragging time out of his bowels (for a lover knows two times, that which he is given, and that which he must make – so Felix was astonished to find that the most touching flowers laid on the altar he had raised to his imagination were placed there by the people of the underworld, and that the reddest was to be the rose of the doctor.

The nearest equivalents to this sort of literary mannerism that come to mind are William Faulkner and Gertrude Stein (both her contemporaries). The novel was considered scandalous at the time of its appearance, largely because of the lesbian theme. But behind the anguish suffered by Nora about her relationship with the promiscuous Robin, there is nothing remotely explicitly sexual between them. In fact none of the characters have any meaningful connection with each other at all. They seem to exist merely as verhicles for Barnes’s gothic imagination and her penchant for poetic image-making.

It is not a book which suggests that subsequent readings will yield up further coherence or meaning, but maybe like The Well of Loneliness which was published only a few years earlier (1928) it is a book of its time which helped to throw off the shackles of Edwardianism after the horrors of the first world war, and opened up the era of modern personal liberty which we now all take for granted.