Edidth Wharton wrote the first version of Ethan Frome in French, as an exercise for her tutor and gave it the title Hiver (1907). It consisted of only a few pages, and was abandoned unfinished. But she returned to the story in 1911 and added the structural device of the outer narrator. Some people see the story as a reflection of Wharton’s own life, since it was around this time that she brought to an end both her own unhappy marriage and her love affair with W. Morton Fullerton. However, it is also possible to see in the story elements of her much earlier novel The House of Mirth (1905).

She regarded the novella as a significant turning point in her career as a writer – the end of her ‘apprenticeship’ as she called it. And for both its form and its brevity it has become a classic in the teaching of American literature, though it’s not so well known in Britain and the rest of Europe. However, it is an amazingly powerful story, and is told in a stark stripped-down style which suits both its subject and its setting of poor New England farming country.

The bulk of the narrative concerns events which take place within the space of only two or three days. But the story is ‘framed by a brief introduction and afterward which reveal the state of affairs twenty years later. The dramatic effect of this framing device is to both create narrative tension and to emphasise the fact that the events of these few days have an effect which lasts for the remainder of the characters’ lives.

The narrator claims that he has pieced together the story from scraps of information related to him by the local inhabitants. However, much of the story’s substance consists of the thoughts and feelings of Ethan and Mattie which only they could have known. Ethan is characterised as a taciturn and remote person who has been damaged by his life experiences, and the implication of the tale is that Mattie has been reduced to an almost vegetative state: so it is very unlikely that they would have given the narrator an account of their personal lives.

This is a weakness of narrative logic, but it is amply compensated by the concentrated drama of the main story itself.

You might wonder why Ethan Frome is generally regarded as a novella rather than a long short story. It’s because it possesses all the classic features of a novella.

Unity of place
Everything in the story takes place in Starkfield. The narrator arrives there; the events of twenty years earlier all took place there; and all the characters concerned are still there when the story ends.

Unity of action
The essential drama of the story unfolds in more or less one continuous action. Ethan realises he is attracted to Mattie – and so does Zeena. He enjoys his chaste dinner with her. And Zeena returns the following day with her plan to break up the relationship – at which Ethan rebels and takes Mattie on the fateful sledge ride.

These events are compressed into the shortest possible chronological sequence – which is framed by the narrator’s introduction and conclusion.

Unity of atmosphere
The events take place in winter, and the grim cold blanketting of snow remains present throughout as a unifying feature and a reminder of the emotionally life-supressing forces at work in the story.

Unity of character
There are a number of named characters in the story, but all of the drama is focussed on the three principals – Ethan, Zeena, and Mattie – who are locked together in a desperate power struggle.

They are locked into a triangle of rivalry at the start of events. Both Ethan and Mattie wish to escape from the bitter dominance of Zeena. But the power nexus is given an ironic twist be the events of the denouement: both Ethan and Mattie become entirely dependent on Zeena, who is forced to look after them.

Use of symbols
The persistent presence of cold and snow reflects the sexual repression which pervades the entire story.

Ethan’s house has lost part of its previous shape, just as he has become permanently injured as a result of the big ‘smash-up’ in the sledge ride.

Zeena has a glass bowl (a wedding present) which she never uses – but it is broken during the meagre supper that Ethan and Mattie share on their evening together.

The main issue
A short story is often a small incident from life which illuminates a character, or presents a moment of revelation. But a novella deals with a subject which stands for a much larger and all-important statement about the larger issues of life. It might contain a similar number of characters, but they represent more universal forces at work.

Ethan Frome deals with the entire adult lives of its three principal characters. The actions they take in the few crucial days which form the crux of the story turn out to determine the rest of their lives.

Ethan Frome is a poor working farmer who lives in a small remote town in Massachusetts. He exists in a state of near poverty with his wife Zeena (Zenobia), a grim, prematurely aged woman who makes hypochondria her hobby and his life a misery. Ethan has travelled as far as Florida and has intellectual aspirations, but he has never been able to develop or fulfil them. Living with them as an unpaid household help is Zeena’s cousin, Mattie Silver, a young woman who has lost her parents.

When Ethan escorts Mattie home from the local dance, he realises that he is deeply moved by her presence. This is something his wife is aware of, and she plans to be rid of the girl. When Zeena goes away overnight to consult a doctor, Ethan plans to enjoy a rare evening together with Mattie. They eat a humble supper together, and nothing except good feelings pass between them.

Next day Zeena returns to announce that she has ‘complications’ that will require a full time servant who she has already hired, and that Mattie must leave. Ethan is horrified by the prospect and makes plans to leave Zeena, but realises that he hasn’t the money or the prospects to support Mattie.

Nevertheless, he defies his wife and insists on driving Mattie to the station. On the way there he and Mattie declare their love for each other. Before the train arrives he fulfils a promise to take her sledging. After one very exhilarating run down a dangerous slope, Mattie proposes a suicide pact so that they will spend their last moments together. Ethan agrees, but instead of being united in death, they are both horribly injured.

Ethan and Mattie spend the rest of their lives in the care of Zeena. 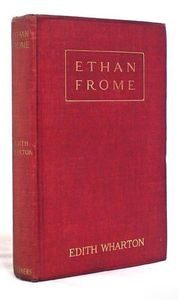